Buy All The Things, My Creative Life

So this time when I went to NYC I wasn’t trying to fit in some sightseeing around other things that I had to do; this time I had whole days of doing anything I wanted!  Every time I watch Project Runway I love watching them run around various key places in New York and I wish I could see them too. 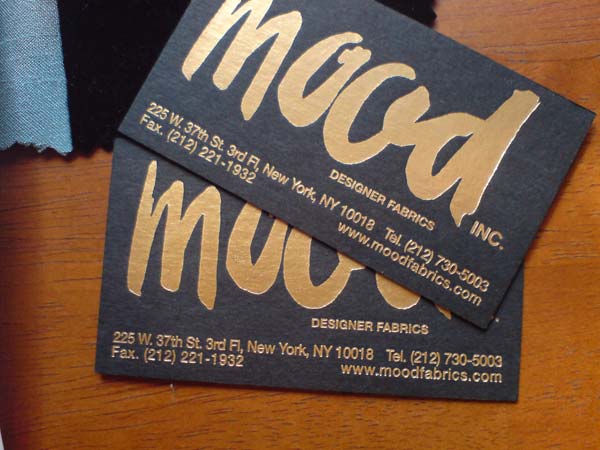 So this time, I decided I would do exactly that and go check out a few of these places and locations that they frequent regularly during the show.  On my list were the following (in no particular order):

I decided to do my little tour on the Saturday morning before the Wicked matinee.  My hotel was in the Garment District so I knew that everything was pretty much close by and walking distance, and usually down one of these very narrow streets.  It always amazes me just how much the buildings loom over these narrow streets and block out the light, even on a sunny day like this. 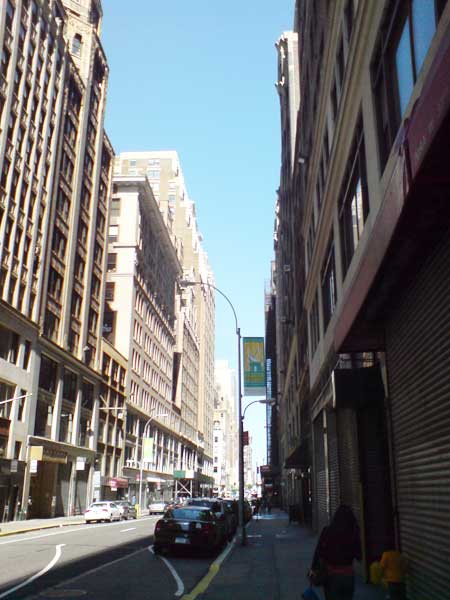 Just a few streets away from the hotel, was Mood Designer Fabrics.  It’s not clear on the show, but the outside of the building is very unassuming and easy to miss, especially if the shutters are closed on the ground floor.  I nearly missed it till I looked up and saw the Mood logo in the upper windows! 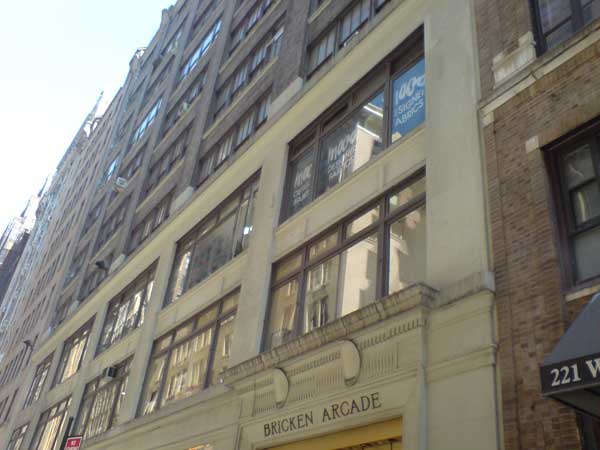 Once inside, I feel like I know this shop so well, having seen it in just about every episode of PR (except the one they filmed in LA) so it was so exciting to walk through the front door.  There is SO MUCH stuff in there that actually it was a bit overwhelming. 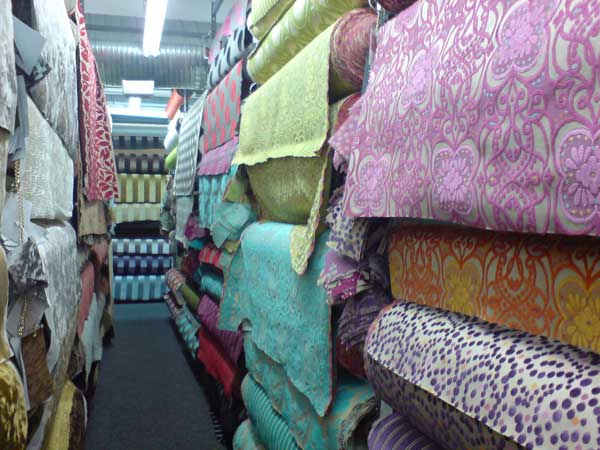 I did pack an extra bag in preparation for what I might buy in Mood but in the end there was just so much that I couldn’t make any decisions.   Standing at the top of these stairs I really felt like I could have been one of the Designers on the show, ready to run down the stairs and find my fabrics with that impossible time limit lol. 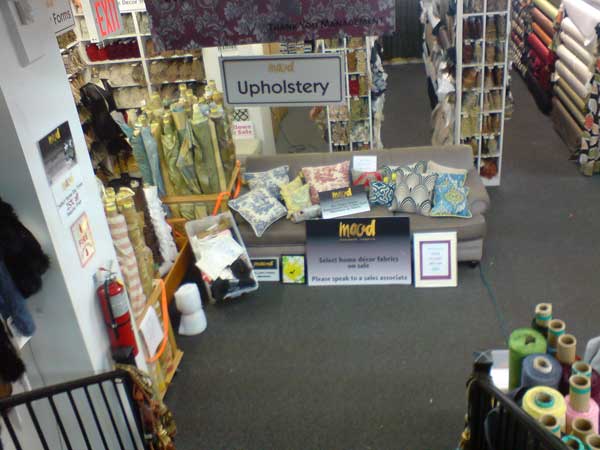 I walked around looking at everything and helping myself to the really useful swatches that hang next to many of their interior fabrics.  There are some things now that I wish I had bought since I now find I can’t get them back here, but in the end I bought a couple of little notions and then some beaded trim caught my eye. 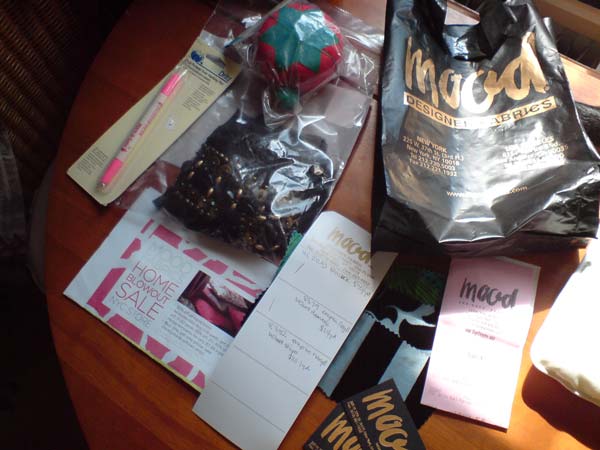 It was just so stunning so I decided to get a yard of it.  Before I got there I had thought about buying a “Thank You Mood” t-shirt and bag but when I saw them in the flesh, the colours on the t-shirt were really too bright for my taste and I had already bought my Moo Shoes bag so I didn’t really need another shopping bag.  This photo is a little blurry, let’s blame excitement of being inside Mood lol. 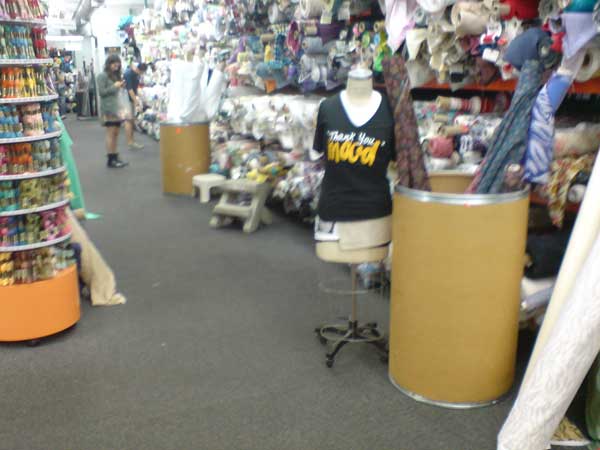 Parsons was easy to find, and I went inside to have a look around. 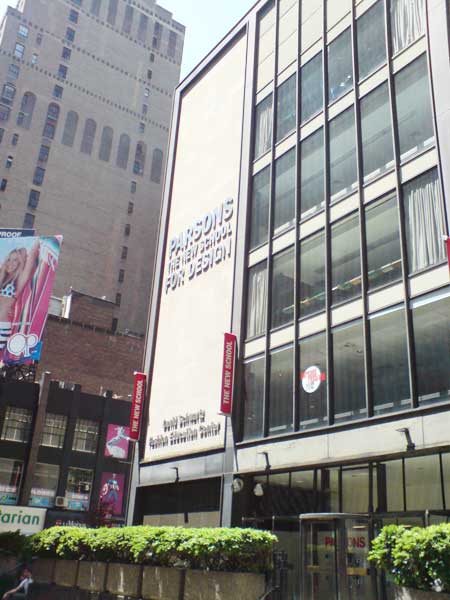 What I couldn’t find was the statue, so I asked the security guard if he knew anything about it.  He told me it was just across the street on the other side of 7th Avenue.  I walked down to Maoz Vegetarian and got myself a falafel sandwich and an OJ.  It was delicious! 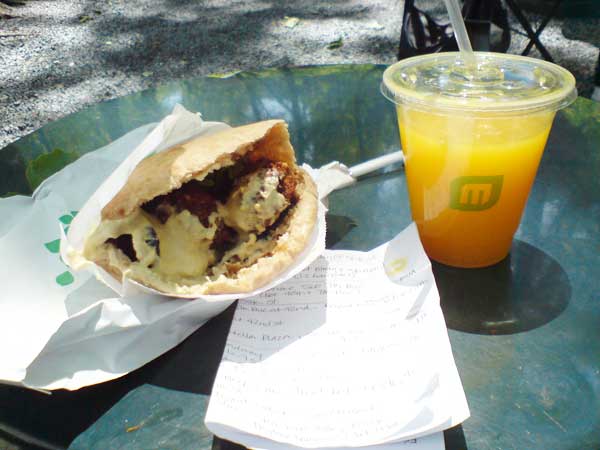 I saw down on the edge of Bryant Park and ate it!  I walked along 42nd Street, past Times Sq and on to Bryant Park.  They do a lot of PR challenges in Bryant Park and until a couple of years ago it used to be where they held NY Fashion Week.  It’s now held in the Lincoln Center. 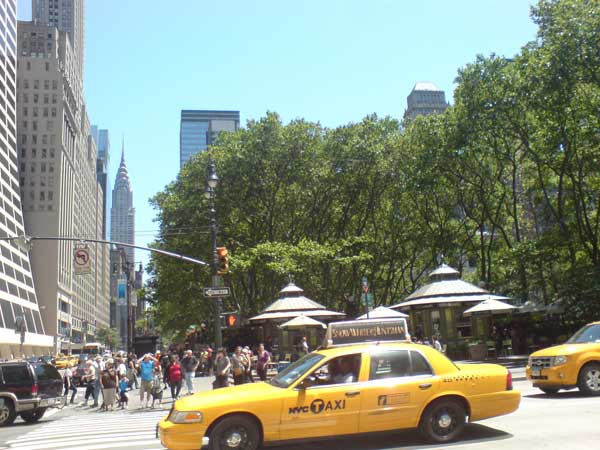 The park was beautiful and really quite busy with lots of people just relaxing and enjoying the weather.  Lots of tables and chairs for people to use and table tennis tables were set up again, free to use.  And they also have a “reading corner” which is set up with loads of free books you can borrow to read in the park!  I sat down near the table tennis area and did some people watching while I ate my falafel sandwich and juice. 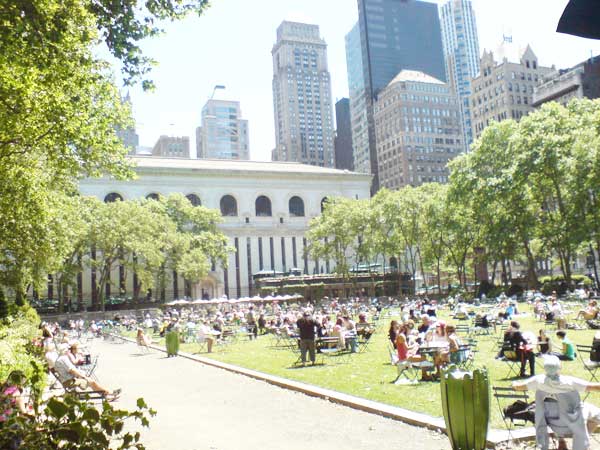 Bryant Park is at the back of the New York Public Library so I could see the back of the library from where I was sitting.  I should also say before I forget that there is free wifi in the park too as well as in the library.  Because I was so close, I did walk around to the front of the library to check out Patience and Fortitude guarding the front door, but going inside wasn’t on my to-do list for today.   Seeing the front of this building just reminds me so much of that scene from The Day After Tomorrow where they all had to run for their lives and take shelter inside the library. 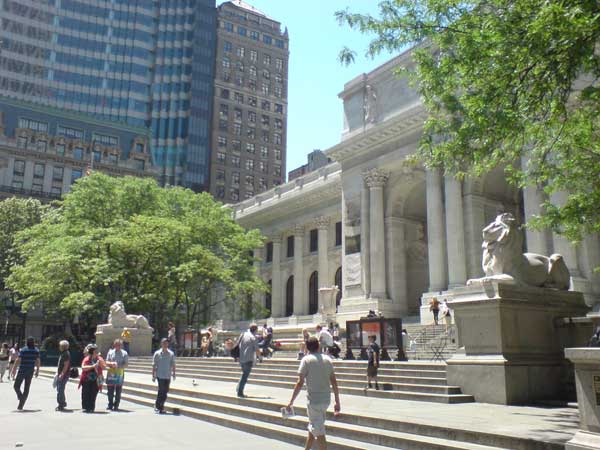 Then I crossed over to find the statue.  What I didn’t realise was that there was a whole “Fashion Walk of Fame” thing going on over on the other side. 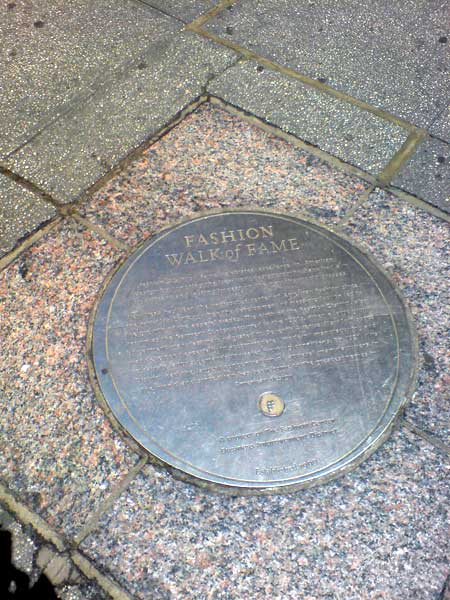 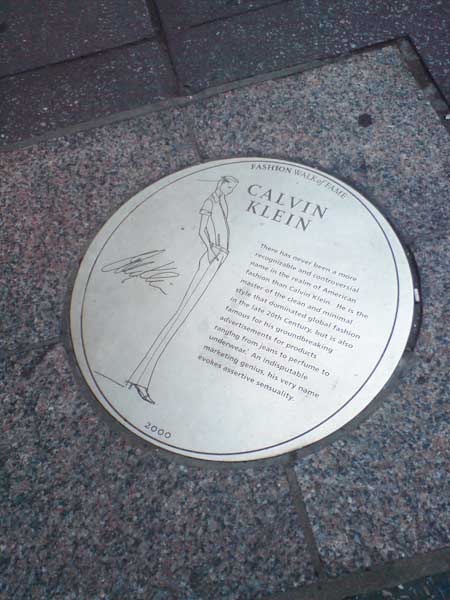 The Fashion Walk of Fame includes such designers as Bill Blass and Calvin Kline and Ralph Lauren. 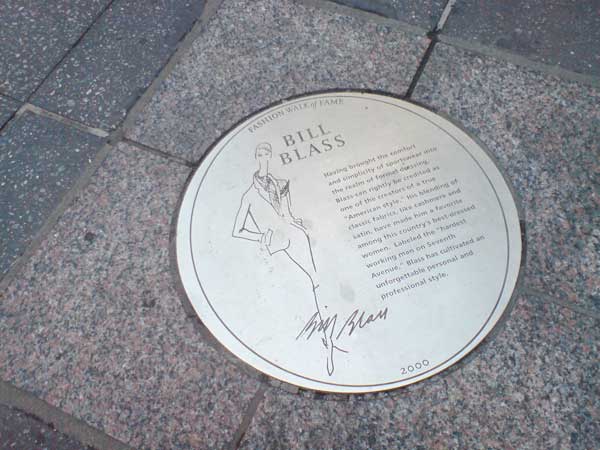 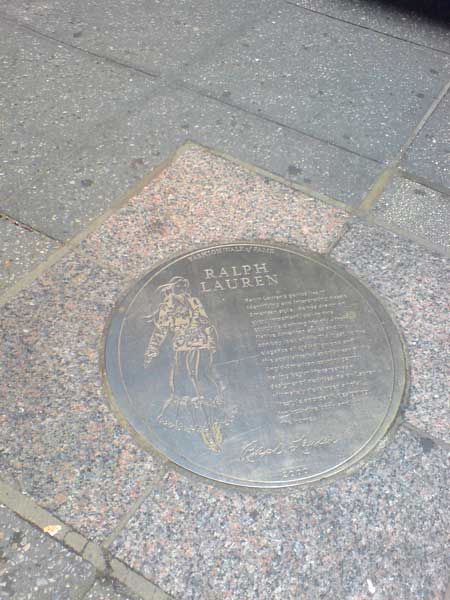 So if I hadn’t been looking for this statue I would have completely missed out on that and also one of my new favourite things – a 31 foot steel needle and the world’s biggest button! Check it out below! 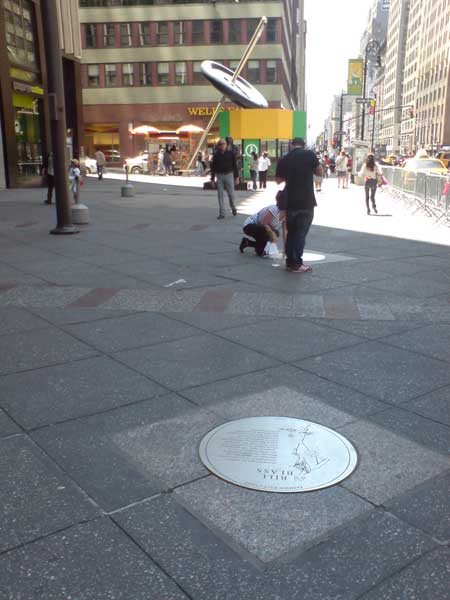 So I found the statue I wanted to see but also one of my new favourite things – the giant needle and button – and the Fashion Walk of Fame!  The statue is much bigger than I expected it to be. 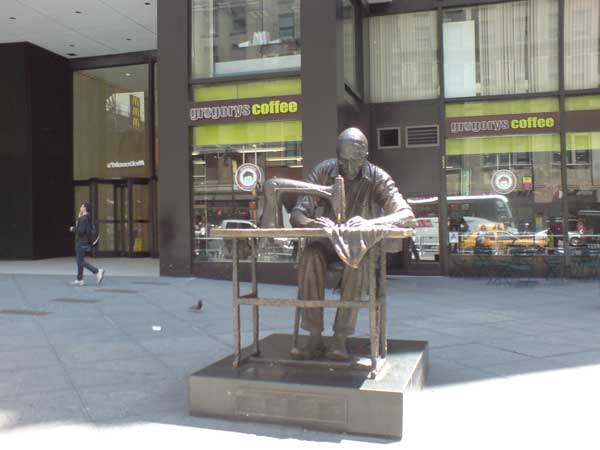 “The Garment Worker (1984), is a life sized bronze sculpture by Judith Weller, depicting an immigrant man at a sewing machine.”  It’s life-size but also up on a plinth so it’s probably around 8 feet high (?). 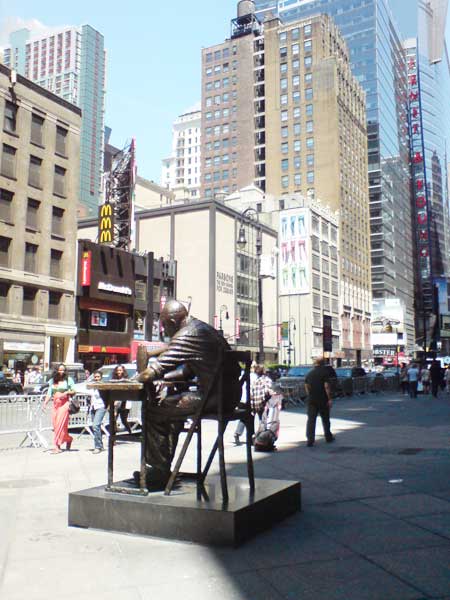 The last stop on this unofficial tour was Michael Kors shop, ha ha sounds so insulting to just call this place a “shop” because it is something else! 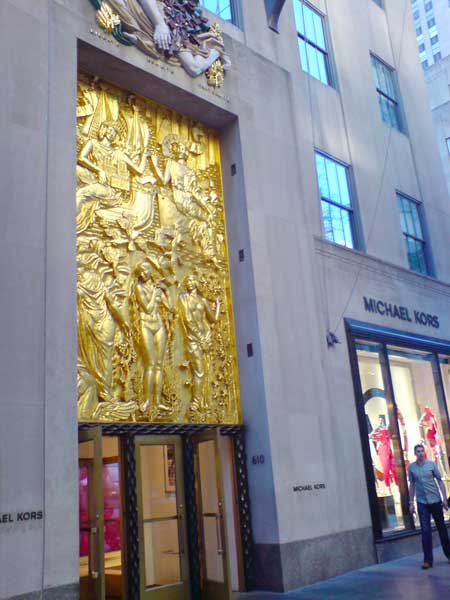 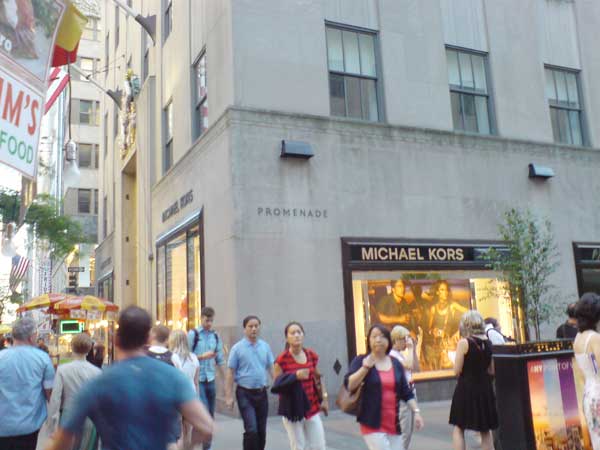 So I got to everything on my list except Atlas Apartments, which I just didn’t get to and is really no big deal, because it’s not that exciting and I wouldn’t be going inside so, I’m fine with skipping it.  I did pack quite a lot into this short trip, so I will be posting more about it in a day or too, rather than dumping it all in one huge post.

(Written after my trip)

Here’s some info about the Garment District and the Fashion Centre:

New York first assumed its role as the center of the nation’s garment industry by producing clothes for slaves working on Southern plantations. It was more efficient for their masters to buy clothes from producers in New York than to have the slaves spend time and labor making the clothing themselves. In addition to supplying clothing for slaves, tailors produced other ready-made garments for sailors and western prospectors during slack periods in their regular business.

Prior to the mid-nineteenth century, the majority of Americans either made their own clothing, or if they were wealthy, purchased “tailor-made” customized clothing. By the 1820s, however, an increasing number of ready-made garments of a higher quality were being produced for a broader market.

The production of ready-made clothing, which continued to grow, completed its transformation to an “industrialized” profession with the invention of the sewing machine in the 1850s.

The need for thousands of ready-made soldiers’ uniforms during the American Civil War helped the garment industry to expand further. By the end of the 1860s, Americans bought most of their clothing rather than making it themselves.

German and Central European immigrants to America around the mid-19th century arrived on the scene with relevant business experience and skills just as garment production was passing from a proto-industrial phase to a more advanced stage of manufacture. In the early twentieth-century a largely Eastern European immigrant workforce powered the garment trades.

With an ample supply of cheap labor and a well-established distribution network, New York was prepared to meet the demand. During the 1870s the value of garments produced in New York increased sixfold. By 1880 New York produced more garments than its four closest urban competitors combined, and in 1900 the value and output of the clothing trade was three times that of the city’s second largest industry, sugar refining. New York’s function as America’s culture and fashion center also helped the garment industry by providing constantly changing styles and new demand; in 1910, 70% of the nation’s women’s clothing and 40% of the men’s was produced in the City.

Cheaper overseas labor and production has dramatically affected the New York industry for decades. This change has forced many designers who once manufactured their lines in the city to shift production overseas, which has in turn affected small cutting and sewing rooms as well as zipper, button and supply stores in the Garment District