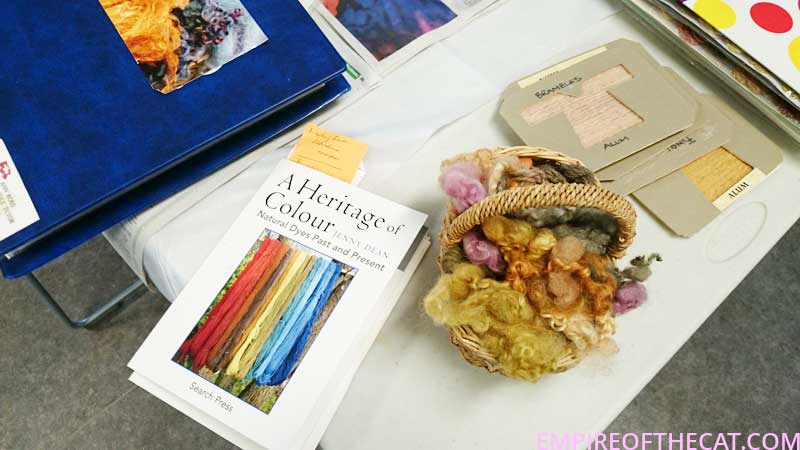 Yesterday I attended a Dyeing with Plants workshop at Craft Town Scotland and hosted by Ann Ross from the Scottish Feltmakers (they also had an exhibition downstairs in the gallery).  The general outline for the class was as follows:

Plant dyes produce an amazing diversity of rich and  complex colours as well as unexpected results.  This practical workshop gives you the opportunity to “dabble in dyes” and build up a selection of samples of both yarns and fibres.  You will learn about the plants and processes to use. From mordanting and using modifiers to produce a range of colours.  Enjoy experimenting and discover how to produce the “Colours of Scotland” All equipment and resources will be provided but you may like to bring along some of your own yarns and fibre.

I’ve dabbled a wee bit with plant dyeing before, mostly with some of the more common/well known plants known for dyeing, such as onions, nettles, coffee, tea, tumeric etc, but I was interested in learning more about what other local wild plants could be used for producing good dyes and of course, being inspired by the colours of Scotland, I was intrigued to see what plants could be used and what I could possibly track down when on my trip next month.

It was very much a hands-on workshop, with seven of us gathered around the cooking pots like the witches from “the Scottish play”, very hubble, bubble, toil and trouble. We started with lichens native to Scotland, and requiring no mordants to fix the dye.  Then moved on to other plants like Heather, Alder, Mint, Broom, Rhubarb root and Red Onion, experimenting with various mordants and additives.  We dyed mostly wool yarns and fleece, and a bit of silk, but I also brought along some plant fibres (cotton, cheesecloth, linen) and some roving.  The animal fibres do take the dye a lot better and much deeper than the plant fibres.  We started at 10am and were finished by just after 3pm, after an hour for lunch.

Here are some photos I took on the day: 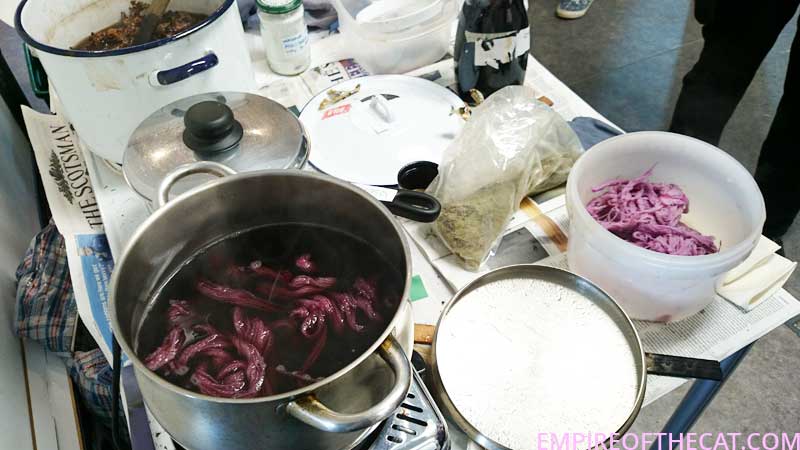 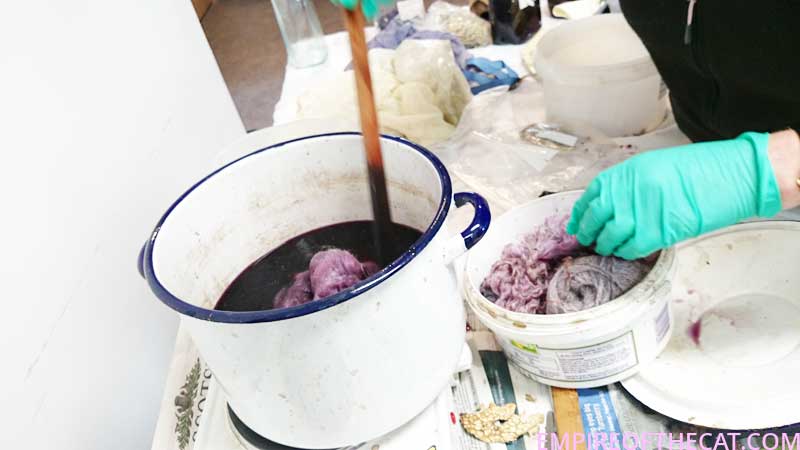 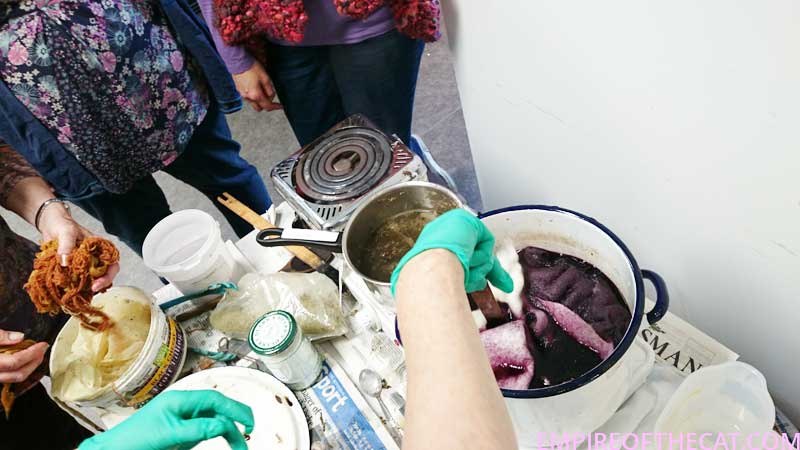 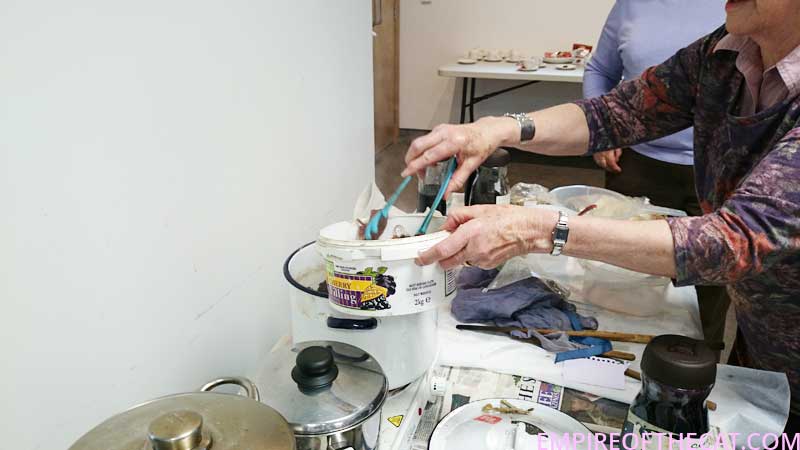 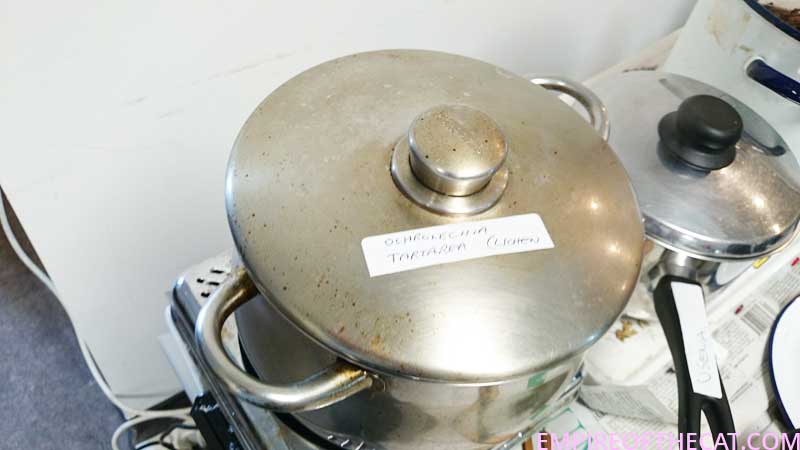 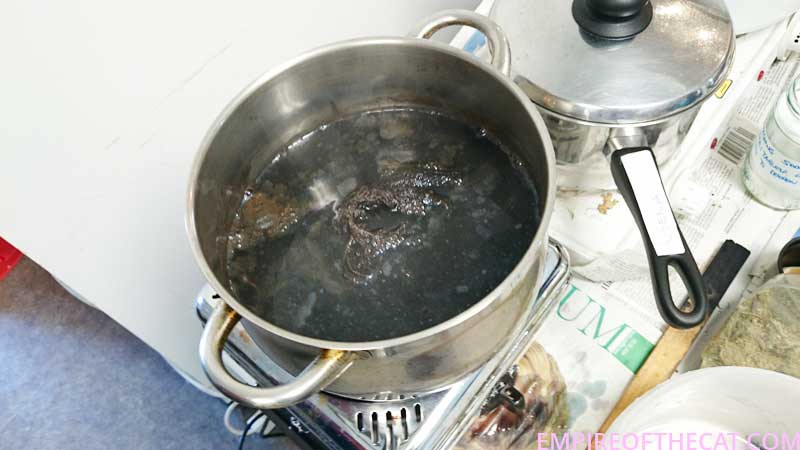 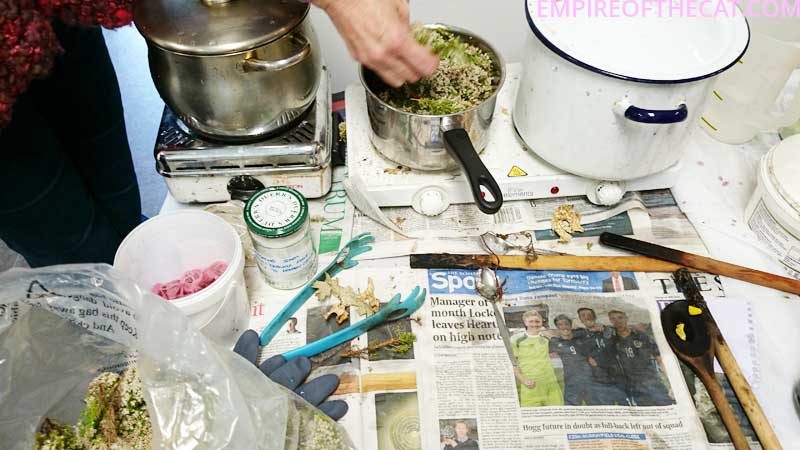 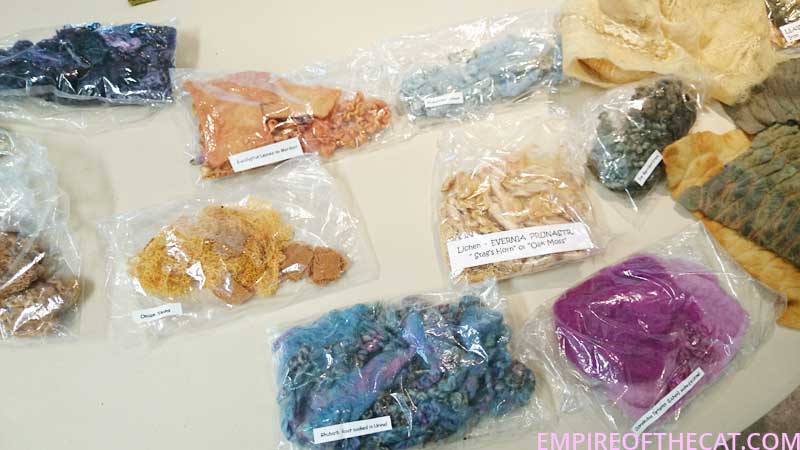 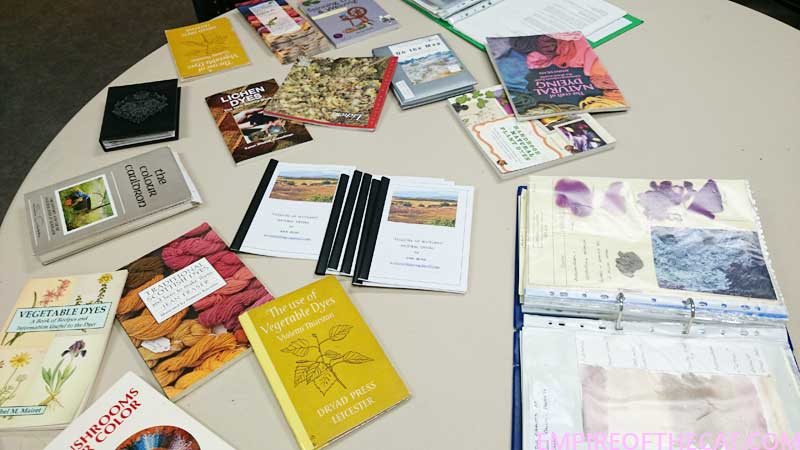 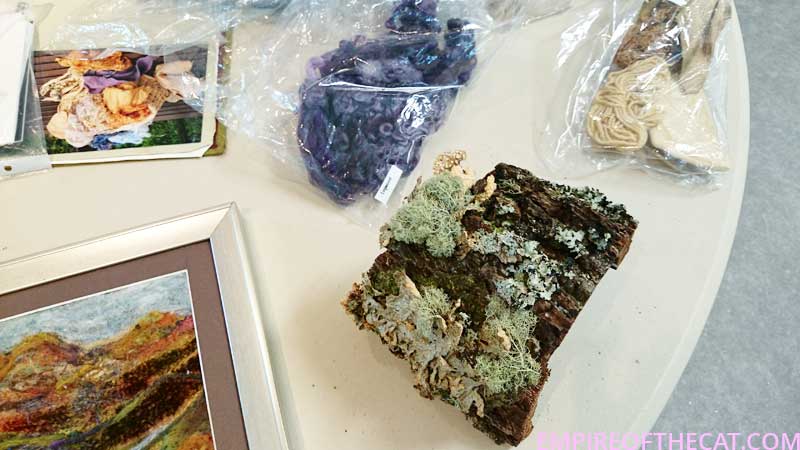 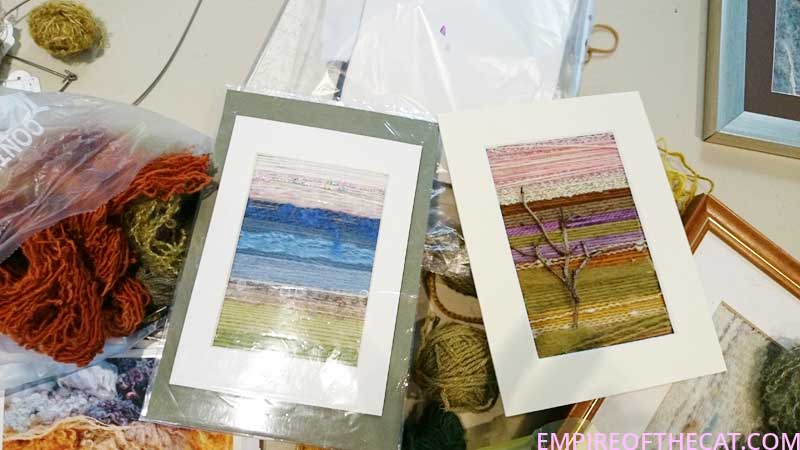 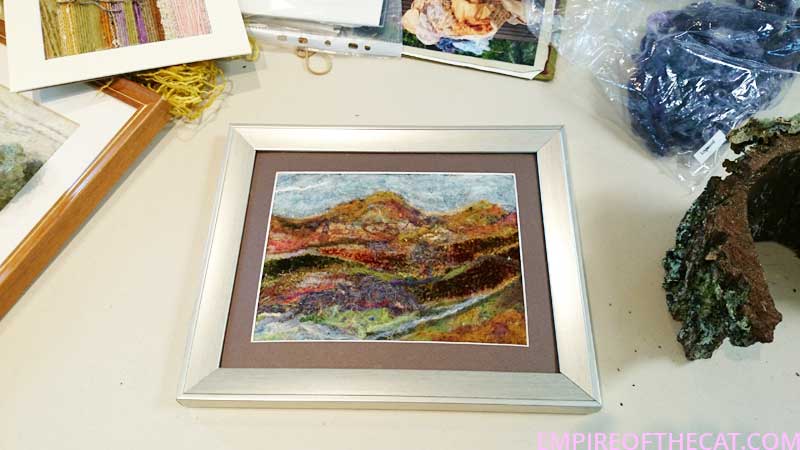 Once I was home I was really keen to try some of the dyeing for myself, so I got stuck in. 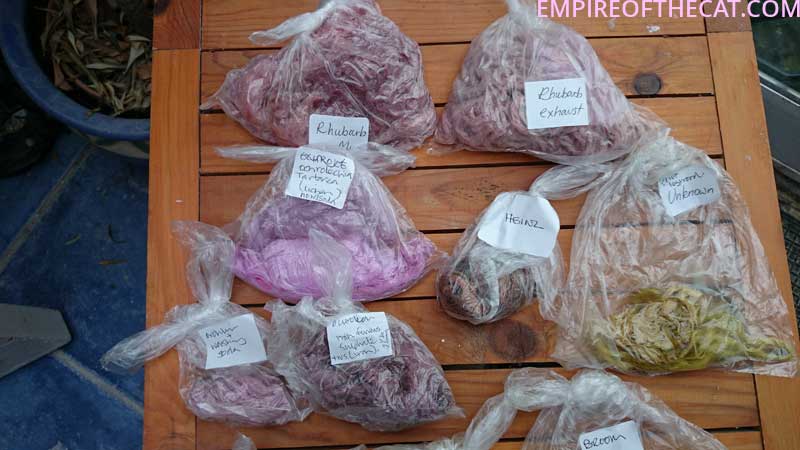 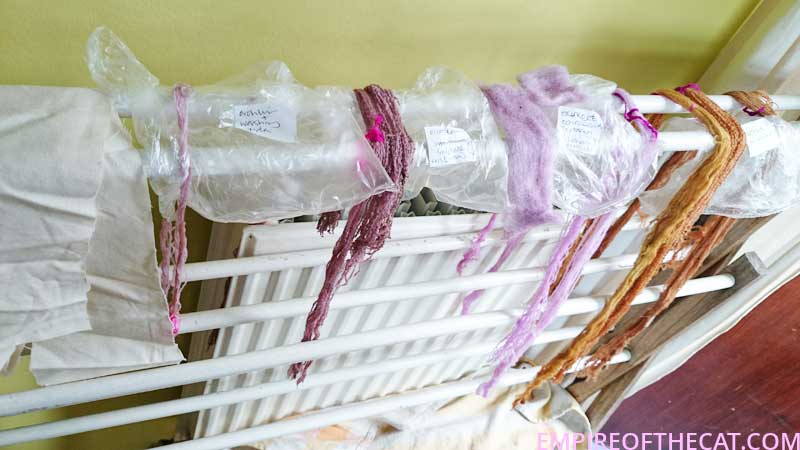 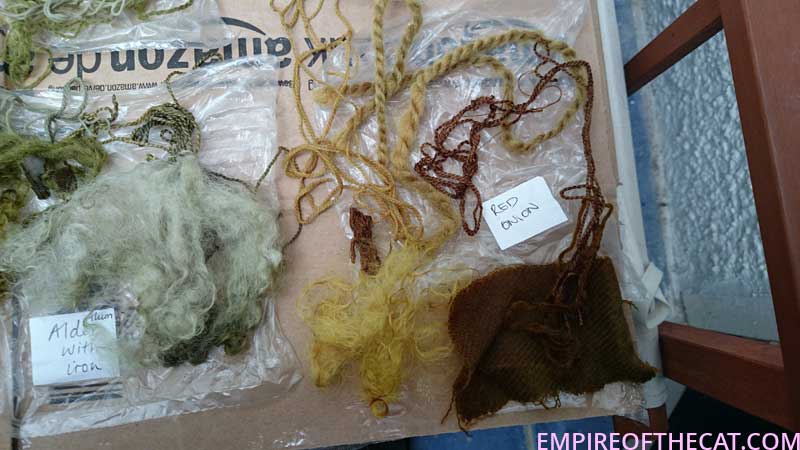 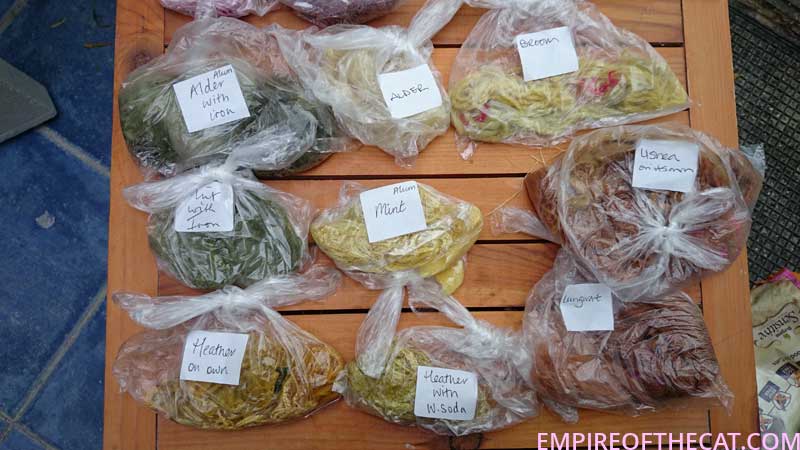 I’m so excited and impressed by some of the amazing colours you can get from these (mostly) very common plants.  I can’t wait to see what I can find on my trip next month.  Even Wombat was intrigued by the smells or maybe he just wanted some of that yarn!  In any case, he’s doing a good job of keeping an eye on it for me LOL

This rhubarb dye colour is probably my favourite.  I have a lot of rhubarb in the garden which we usually just eat but maybe we can spare some of it for dyeing fibres!