Today I have a very quick art journal page I made yesterday for the More Than Words Costume Challenge and because it’s October, of course it’s inspired by Halloween!

The main challenge is based on a word inspiration and a creative challenge and for this month it is: 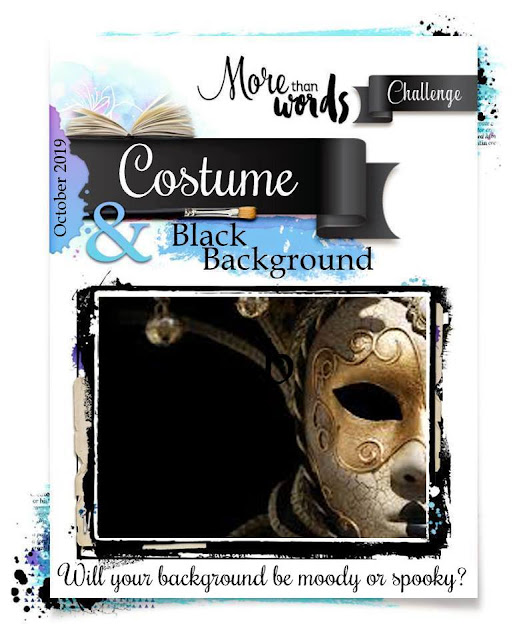 So what does the word COSTUME inspire me to make?  Well my mind went to all kinds of different places – costumes, theatre, masquerade, masks, disguise, and eventually back to Halloween and dress up, because that would be the most times I have ever worn a “costume”.  Not only is Halloween the most times I have ever dressed up in my life, I have pretty much always dressed up as a witch haha, certainly during my childhood.  The Halloween Witch costume is probably one of the easiest to make, so that’s what we did.  Armed with a broom and a pointy cardboard hat, and dressed totally in black, we would go off trick or treating along with all the other wee witches.  I chose the words LETS PRETEND rather than COSTUME for my spread as we were always pretending to be someone else or something else when we played as children, and quite often the idea would start with Let’s pretend we are…

Since a black background is required as part of the challenge I decided to use my 8 inch square black Dylusions journal which is perfect for this project.  I started by making my background using some Distress Oxide Sprays in Blueprint Sketch, Wilted Violet, Mermaid Lagoon and Salty Ocean.  Once my background was dry, I added some white splatters using gouache.  I haven’t taken process photos of this spread mostly because I did it at night so bad lighting, and because it’s not that kind of post ie tutorial.

I used a bat stencil from Newton’s Nook and some Nuvo Glimmer Paste to make all the little bats and I dried it with a heat tool to speed everything up.  I had some other elements I knew I wanted to add, so I pulled them all together and started arranging them on the page.  In the end, I kept the witches (TH paper dolls), the fence with cats, the spiderweb, tree, and die cut bats.  I heat embossed most of them with Wow Black Glint embossing powder and painted the spiderweb with Wink of Stella.  I cut out a large white circle to use as my moon and painted it with White Pearl acrylic.  I used Tim Holtz Handmade alphabet die to cut the letters LETS PRETEND from some watercolour paper I had previously painted and then adhered it all in place.  I left part of the moon unglued so I could use it as a pocket for my tag.

Entered in the More Than Words October Main Challenge which this month is COSTUME.

I’m definitely getting a vintage-y Tim Burton feel from this – I think it’s the colours and the font mostly, but I like it.  You can’t see the shimmer on the moon in these photos but it looks pretty cool IRL.

Oooooh! Love the background, that spooky blue is just perfect.
Thanks for playing along with us at More than Words challenge.

I lov eyour shimmery effect and fantastic take on the challenge. Thank you so much for joining us in the More Than Words Challenge.

Such a fantastic spread! A gorgeous take for the challenge! Thank you so much for playing along with us at More Than Words challenge!

I love it, its so beautiful
Thank you so much for playing along with More Than Words

This is fabulous! I love all your shimmery features and the moon pocket is such a great idea! Welcome to More Than Words!