Today I have another art journal page I made yesterday for the More Than Words November Main Challenge!  The main challenge is based on a word inspiration and a creative challenge and for this month it is: 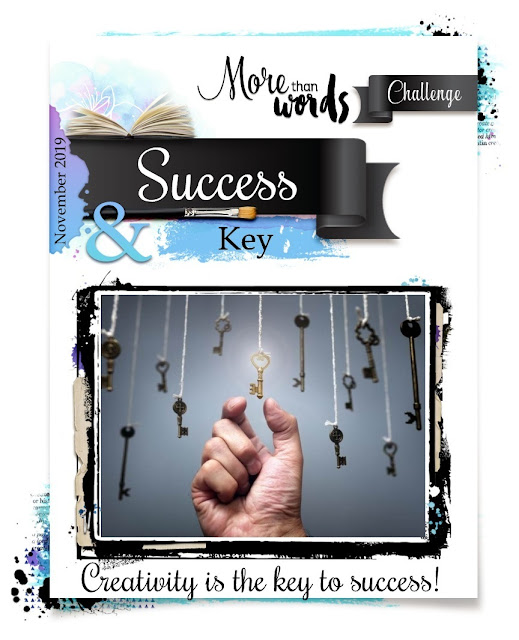 I have to admit that I have been struggling these last few weeks due to a problem with my back, but also because it is so darn cold!!!  We’ve been having a bit of a cold snap and temperatures have been down around -3C, that’s MINUS THREE degrees.  At least that is outside the house, but inside the house, it’s a whopping 12C!  Anyway, all I want to do is hibernate under some blankets, eat warm and comforting food and wait for an early spring!  But of course I can’t do that unfortunately, so I just have to get on with it and make sure none of my fingers drop off and I don’t notice haha.

Anyway, enough about winter, let’s think about flowers and butterflies and warmer weather and what is the key to success?  I’ve been giving this some thought and I guess the key to success for me is to do what you love.  So I decided that would be my “key” for this challenge.  Just about everything on this piece is something from my stash of leftovers and unused bits and pieces – from times when I make too many of something and have surplus.

Some of the flowers are from a few months ago, when I spent an afternoon making a lot of paper flowers and leaves in multiple colours.  I never got around to using the vintage cream ones so I decide to use them on this along with one of the butterflies I also made at the same time.

I was going to add in some of this purple paper and that mauve flower but they didn’t make the cut in the end but will be used in another project soon.

So I ditched the purple and stuck with the neutral colour scheme.  The white flowers are from Prima and I used them recently on this project some of which I painted pink.

This paper is also from Prima from one of my favourite collections – Salvage District.  I thought it went well with everything else but I wanted to highlight some of the leaves in the pattern so I did some testing in the middle where it would not be seen, using various shades of Polychromos pencils.  I also added some paint splatters in gold and white to the edges which would be seen.

Here’s a close up of the pencil highlights

For my centre piece, I used one of the coffee stained watercolour backgrounds I made a few weeks ago for a coffee card challenge and didn’t use.  The reason I didn’t use this one in particular was because it’s 8 inches square and I didn’t want to cut it up for cards, as I liked how the staining and splattering had turned out so it seemed a shame to chop it into smaller pieces.

I used a key, padlock and keyhole mould from Prima and painted them with Metallique paints – who could tell they were made out of hot glue!  I thought the keyhole would look good as the butterfly body, and I did some journalling on the wings in a brown pen.  I like to experiment with calligraphy in my spare time but I haven’t done any for a while and my fingers were so cold it was making it a bit difficult.  Also because of the cold, the ink was stuck in the pen and was too thick to actually come out (!) so in the end I used metallic watercolour paint and a dip pen to write the quote on black card. I think despite the wobbly letters, the gold paint on black turned out better than the intended brown ink on white would have so it all worked out in the end!

And speaking of cold, the glue I was going to use had the same problem as the ink in the pen, it was too cold to come out so i ended up using Glossy Accents to glue everything in place – ah where there’s a will, there’s a way, right?  lol  Maybe I should change my quote to “A warm climate is the key to success” haha

Entered in the More Than Words November Main Challenge which this month is SUCCESS.