So today I have an art journal page to share which I am calling So Much Cake So Little Time. This is a constant problem isn’t it?  So much cake available and just not enough time to eat it all! As my birthday is this month I am really hoping for lots of birthday cake so perhaps this has influenced my thought process here today too!

OK then, so I created this AJ page using paper from Maja Design – Little Street Cafe, because food and plus it’s really pretty.  All the cardboard letters and frames and cake photos are all recycled from food packaging and I am also using a printed photo of Marie Antoinette, who famously liked a bit of cake I believe. 🙂  … um no actually, let’s save it for the end of the post because something happened along the way and I don’t want to spoil it by revealing the finished project now!

So you might recall a few weeks back, I spent some time die cutting a whole bunch of letters from old boxes and cardboard – especially these cat food boxes – so I am thinking of using some of them today or the negative leftovers – and this polaroid photo frame die. I have an idea that I am mulling over in my head so keep reading 🙂

This is intended as my DT project for the March MTW Main Challenge and so I have been thinking about this one for a few months, and gathering supplies like this lovely Little Street Cafe paper and some boxes with pictures of food, like this one below…

And this one also which I really love as it already has a square opening on the top which would be perfect for my photo, right? It even has nice rounded corners. I also plan to use this Lawn Fawn polaroid type frame die to cut out my square photo frames.  I bought this die at least two years ago after seeing someone use it on youtube and thought it would be really handy.  Once I tracked it down, ordered it, and received it, would you believe I never got around to using it?  You can see the heart die is still attached to the photo frame die and I had to cut them apart today!  Well, hey, I’m just glad I finally got around to using it, so it’s not a complete waste!

I used both frame dies to cut out a bunch of frames from cardboard packaging which was printed on one side and white on the other so I will use the white side and paint it.

My only problem is deciding which of these beautiful papers to use for the background, so I spent some time trying them all out to see how they look against the macaron box which is funny really when you see how it turns out.

I couldn’t decide between the yellow papers and the pink papers as I was trying to co-ordinate with the macaron colours and of course there are yellow and pink macarons! I really love this pink damask design though!

I had this phrase running through my head – So Much Cake, So Little Time – so I knew I wanted to use some die cut letters to make it.  I had recently received these two sets which I had to buy for obvious reasons and I thought Marie would approve of the scripty font – very regal and queenly.

However, when I opened them up, it was really hard to work out what some of the uppercase letters were – it would have been super helpful if they had been in alphabetical order but they were not – so I didn’t have the time to mess about with them.  In the end, I pulled out one of the big tubs of already cut letters I mentioned at the start of the post – can I say “Here’s one I prepared earlier” now?  But I did prepare them earlier, as they were the ones I cut out weeks ago ha ha.  This is the Letterboard tub and there should be plenty of duplicate letters in there to make the words I want to make, so I started to arrange everything on the paper. I love this macaron box with all the macarons on it, so bright and colourful, but I could do without some of the dark blue printed parts of it which is messing up my design!

This paper is 12 x 12 so I cut it down to fit in my art journal and then it was time to alter it a little bit using this new Finnabair stencil called Vintage Wallpaper and some Modelling Paste. I also stuck all my letters down on some Sticky Grid to make them easier to paint as it would hold them in place.  By the way, this is the same bit of Sticky Grid that I used weeks ago to do the same thing and it is still sticky enough to use again!

The Modelling Paste doesn’t take long to dry, plus it was just a thin coat, but I also gave a quick blast with the hairdryer to hurry it up a little.  While that was drying, I painted all my letters with Jacquard Lumiere paint in Sunset Gold and Pearl Magenta, and while I was at it, I painted the frames too!

Then I started to arrange everything on the paper to see how it looked.  The words weren’t showing up very well against the printed parts of the macaron box, so I stuck them down on some vellum to place over it and that was much better.  I just couldn’t see the final layout yet, it wasn’t turning out how I saw it in my head.  I put the gold frame around the square hole in the box and I liked that but there was still something bothering me.

And then a funny thing happened. I just happened to sit the letters/vellum down on top of the paper while I was moving everything and look how nice it looks against the paper without the macaron box in between.

Hmmm… I started to play around with everything, omitting the box from the equation and decided that I liked it a lot better.  Turns out less really is more, who knew!

Anyway, I needed to think about this a bit more so I did that while I was working on the paper.  I used the same gold and pink Lumiere paints on it and then added some Magenta and Burnt Sienna Liquid Acrylic splashes and then more splashes using white gouache.

Here’s a closer look at some of the painty bits 🙂

Time to get back to the arrangement of everything and I came up with this layout which I really like.  I was able to peel the gold frame back off the macaron box so I was still able to use it. I was a little worried but luckily it hadn’t had time to stick to the box and it came off easily.

So after I glued everything in place, I ended up with this layout.

And here are some close ups as I really love how the letters turned out – not too shabby for some old Felix cat food boxes eh?

And just in case you are in any doubt, I really like…

hahaha, it’s so true though 🙂

Here are the details for this month’s More Than Words main challenge: 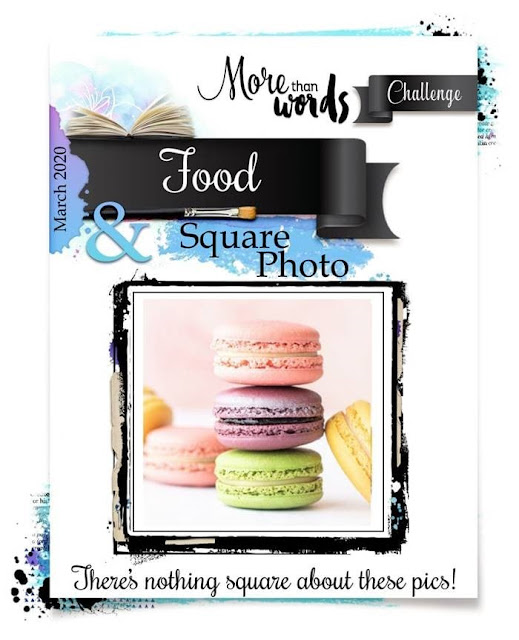 I’d love to see what you make so don’t forget to enter the More Than Words Main Challenge which is open till the end of the month!

I am also entering this art journal page in the following challenges: