Hi and happy Saturday!  Hope you’re enjoying a day off and some nice weather.  I’ve had to hold off on posting these as I didn’t want anyone to be spoiled and apparently the mail has been a touch slow and so some of the giftee’s hadn’t actually received their parcels until just recently.   If you want to see the other posts in the birthday series, click here to see the paintings and here to see the jewellery.

I have three friends and a friend’s daughter, who all have birthdays in August so I decided to make life easier for myself and make four cards at the same time using the same basic supplies and techniques.  I recently got these really lovely Alice in Wonderland paper napkins that are too nice to actually use as napkins lol, so I wanted to use them to make the cards.  Of course you can’t actually see the cards in the above photo because I have {in}conveniently covered them with the kraft boxes {oops} that I stamped for the other part of the gifts. 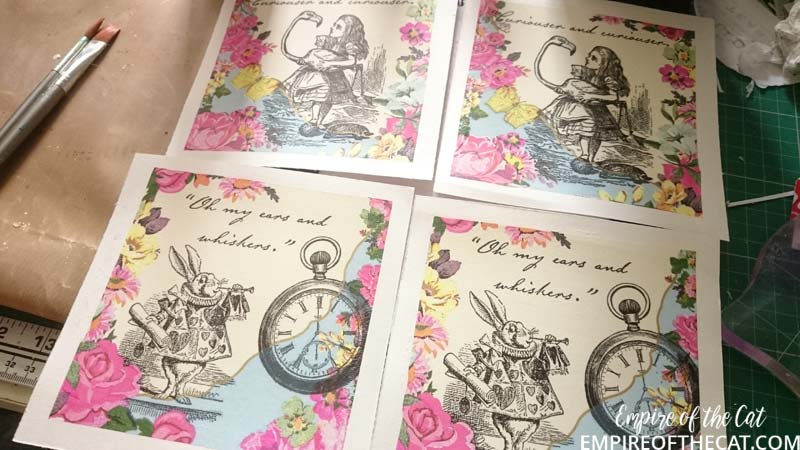 Anyway, I trimmed the napkins down into little squares  and then stuck them down onto some white cardstock squares.  There are a few ways of applying napkins to card to stop them getting all wrinkly and my favourite way is using tin foil.  Of course the downside of the tin foil is that you can’t see a blooming thing you are doing, but you don’t really need to. 🙂 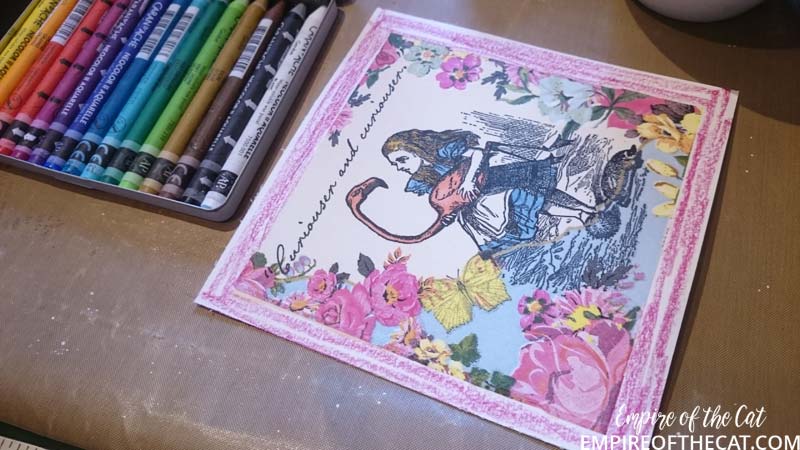 After the napkins were dry I scribble around the edges with my Neocolour II pastels. I also started colouring in parts of the napkin that were black and white, adding colour to the flamingo, and Alice’s hair and dress etc with some Pitt pens. 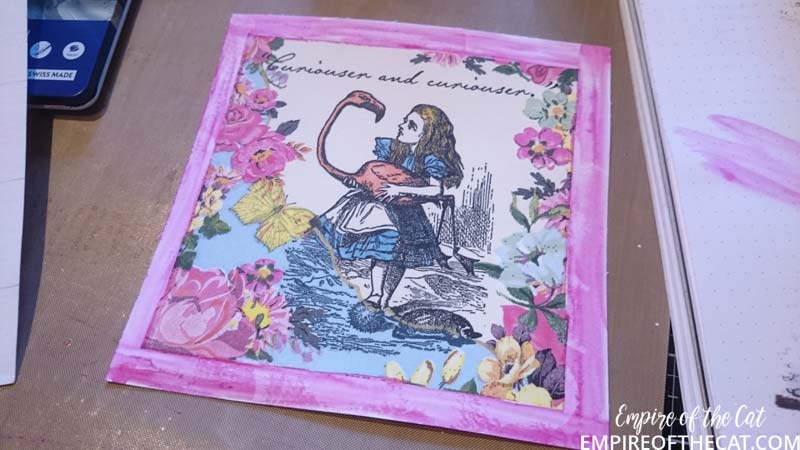 Then spread out the Neocoluor II pigment with a wet brush. 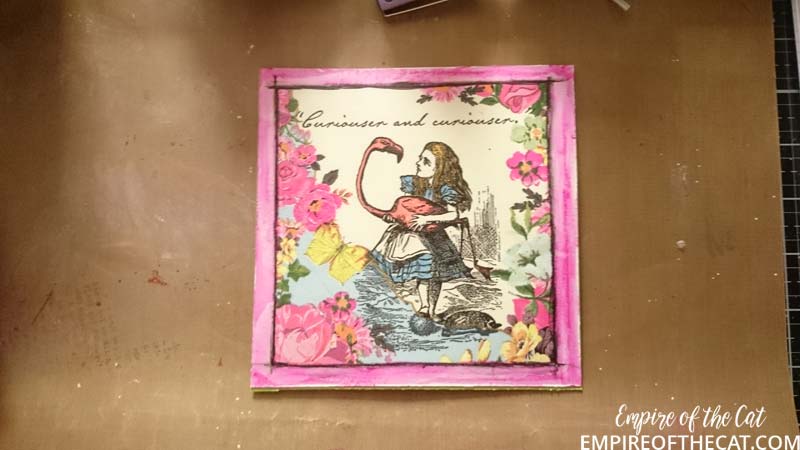 Then I went around the edges of the napkin with a black Stabilo pencil and some gel medium. 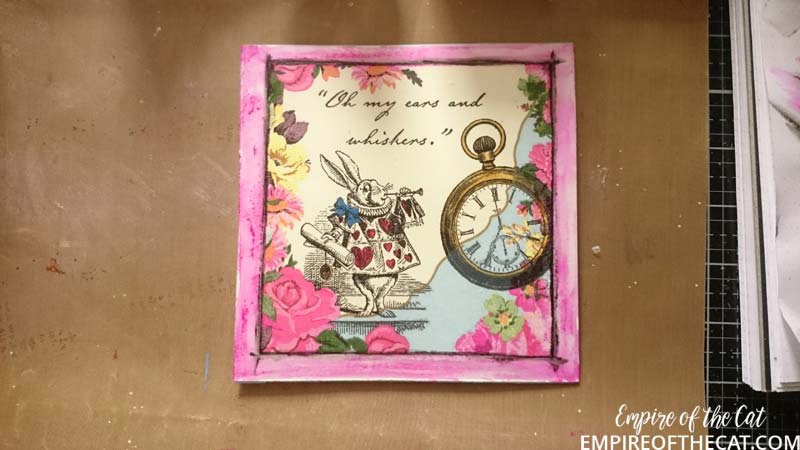 Same process on the white rabbit cards – told you I was trying to make it easy for me! 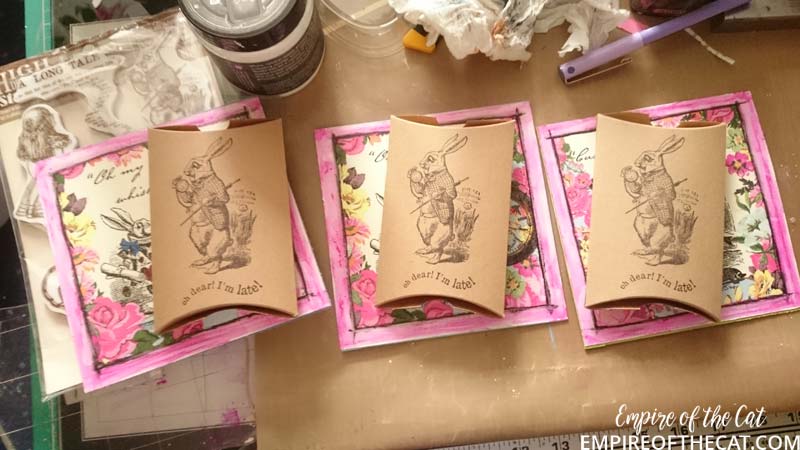 So now as I have a little jewellery gift to go in the boxes, I stamped on the little kraft boxes too.  How appropriate is this stamp considering most of these gifts were going to arrive late!

That was three cards done and ready to post.  I made simple white card bases from standard weight cardstock and glued the napkin panels to them and stamped the white rabbit and a birthday greeting inside each one.  Then they were ready to fly off in the mail.

And then we come to the last of the four cards, which I finished off on a different day as I was delivering that one in person so it didn’t need to be posted.  For some reason, I wrote the wrong name inside the card and had to start over!  Luckily I was able to remove the napkin panel and reuse it but I had to change the rest of the design of the card, which actually turned out OK. 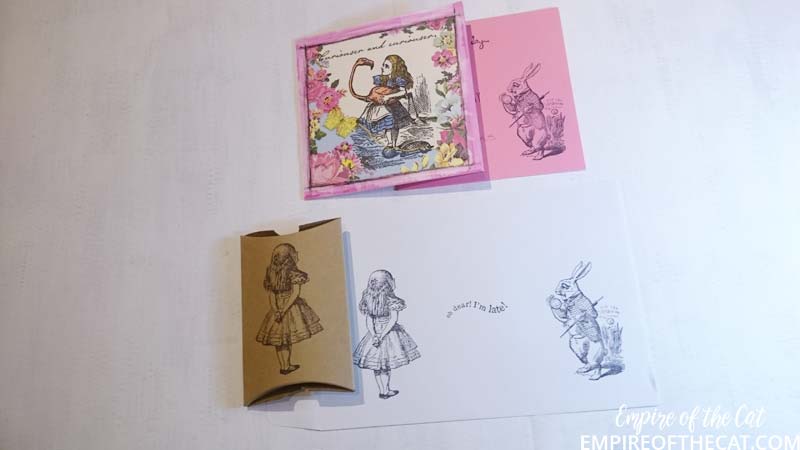 Here’s how that card looks standing up, with a cool little Z shaped folded design. 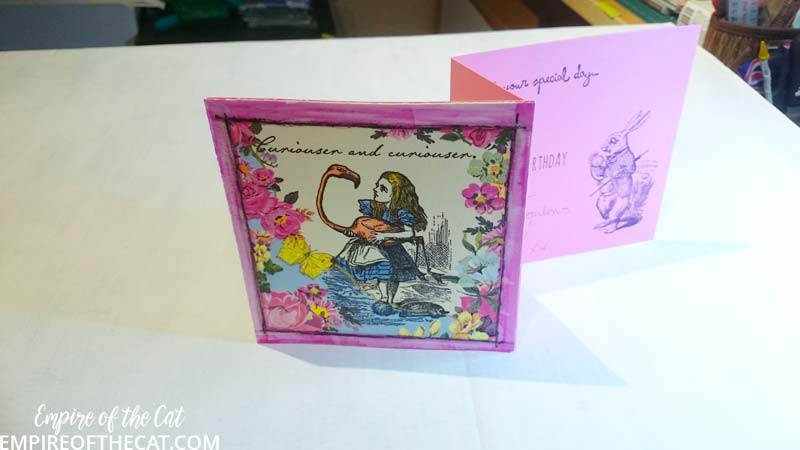 Once I get the photos edited, I will post up the jewellery element to this birthday series.

As always, thanks for reading!