Out With The Old, In With The New

I’m very much in the Out with the old, In with the new frame of mind at the moment, as I often am at this time of the year.  This year though feels different somehow, maybe after 2020 we all want to make more changes than we do usually. 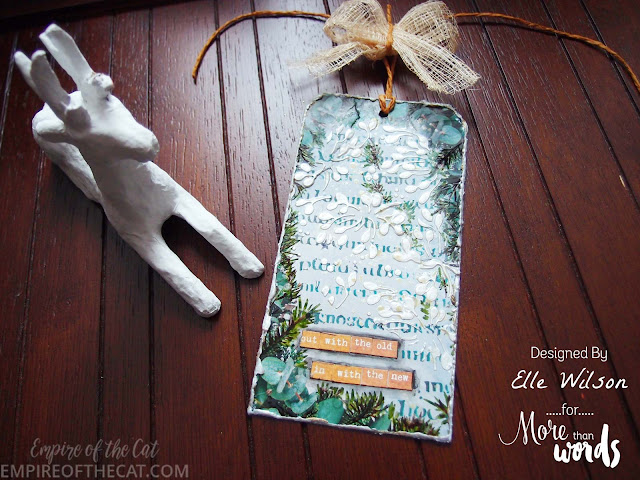 It’s time for a new Mini Challenge over on More Than Words Challenge Blog and this is my DT inspiration for this month.  The challenge word is NEW which is a very flexible word and one that features in lots of quotes around this time of year – new year, new you, new beginnings, and of course, out with the old, in with the new, which is the one I have chosen for my project.  Speaking of old, I have some boxes that were destined for the recycling bin but I managed to save and use in this project.  These are all from Tesco supermarket and contained yummy festive treats.  I really liked their designs this year and have already used one of their mailers in another card so I thought I would repurpose some of these boxes for this project. I really love the eucalyptus and fir tree branches on the corners, so that is what I will be using today. 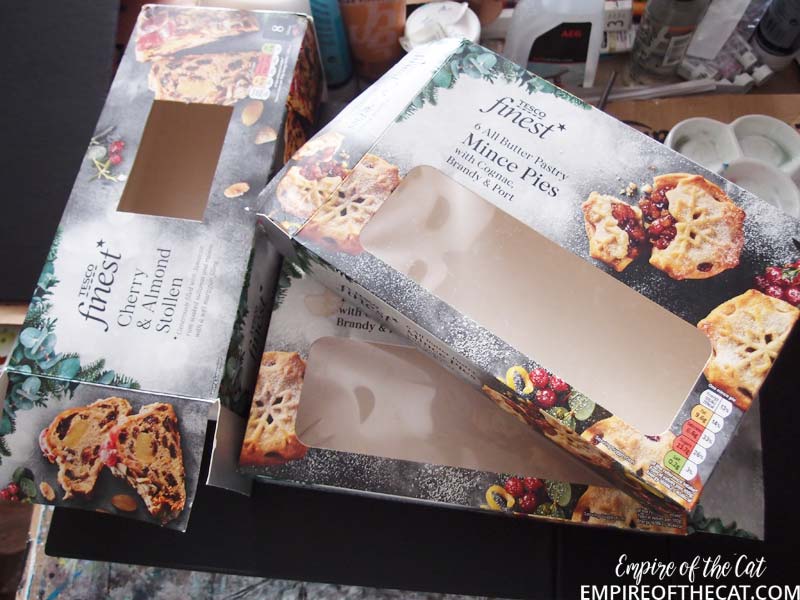 I started by breaking down the boxes so they were flat and easy to work with, then I got a tag from my stash and used it as a template to draw a tag shape on to one of the boxes. 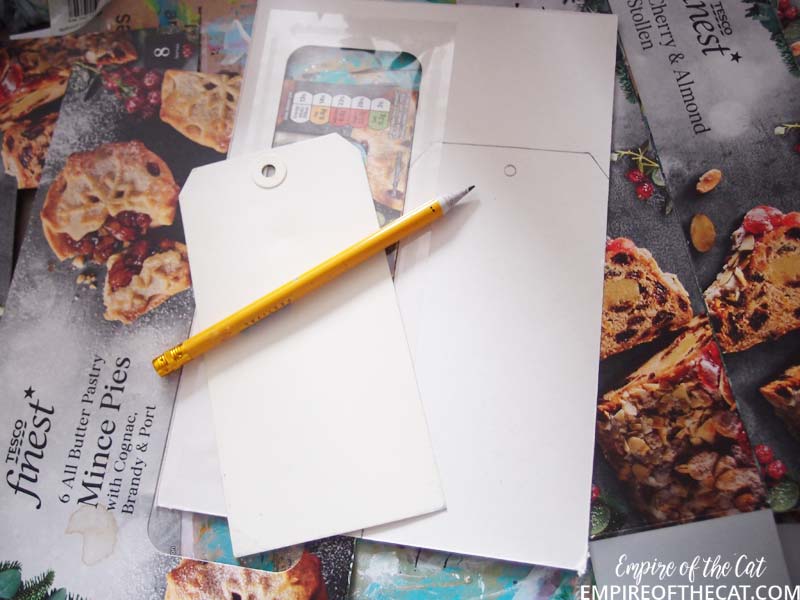 So now we have this tag with the lovely greenery on the bottom corner but I needed to get rid of the mince pie!  I torn off two other corners from the boxes that also had the green leaves. 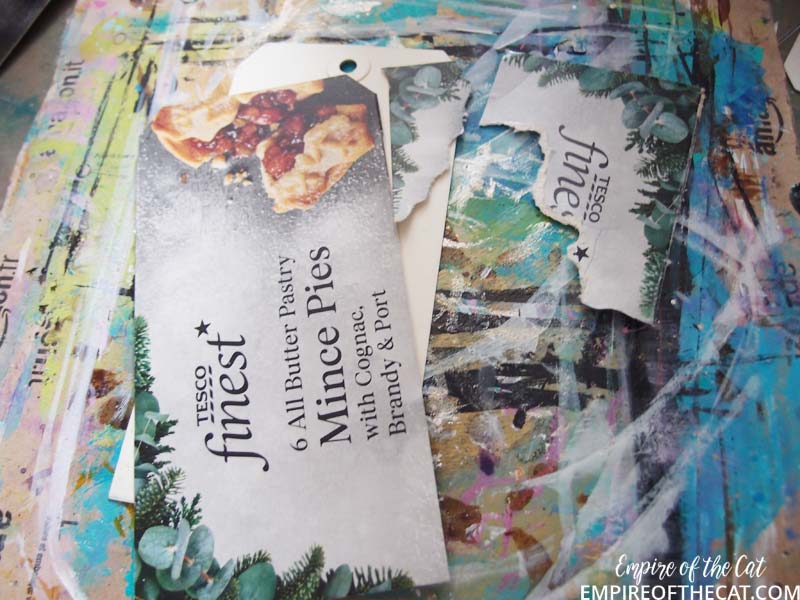 I glued the extra pieces down on the top of the tag and trimmed the corners. 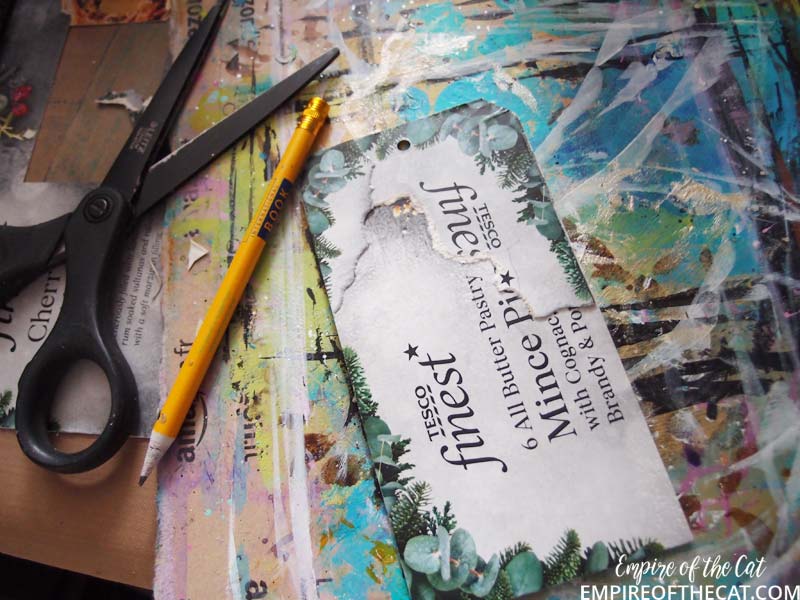 I like the silvery grey background colour but not all the writing, so I mixed up some paint and covered it up. 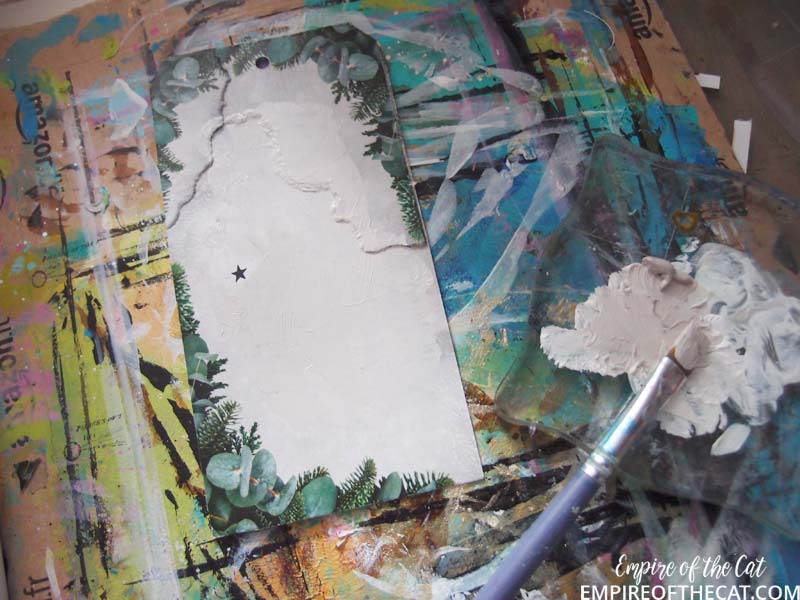 Now to find some words!  None of the words I wanted seemed to exist in my sticker collection.  I have this older set from Prima that seems to have every word you can think of but I don’t use it often because the words are not in alphabetical order so it’s hard to find what you are looking for.  In this case though, I decided to spent some time pouring over them until I found what I was looking for.  I did need multiples of some words and couldn’t find a second “with” but I did find a “without” which was perfect as I could cut it down and use both words! 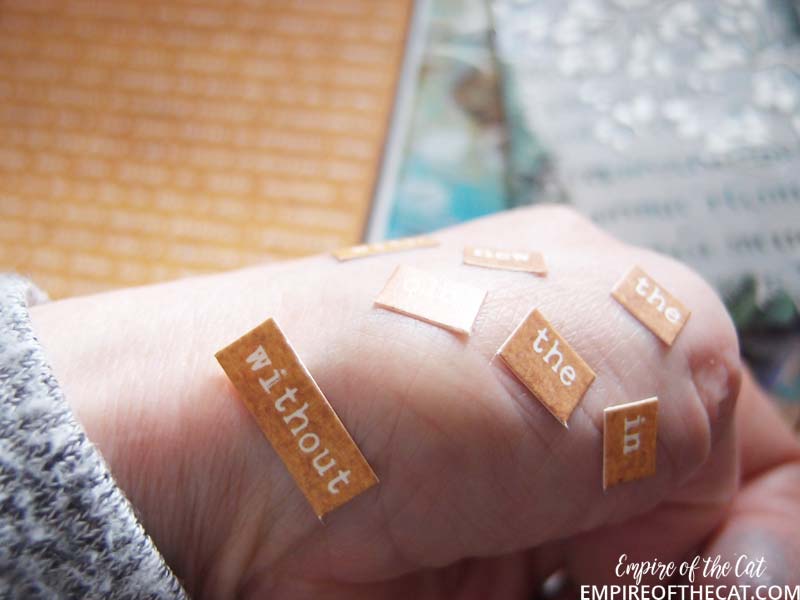 While I was looking for my word stickers, I had also stencilled the background of my tag using two different stencil, one was a text stencil which I used with green ink, and the other was a berries stencil that I used with white icing paste.  I did this for decoration but also to help hide the joins!  Then I used a Pitt pen to draw in more of the greenery around the tag in various places, adding to the existing greenery and adding some random bits in the middle.  Then I stuck down my words and outlined them with black.  The final touch was to add more of the white icing paste around the edges of the tag. 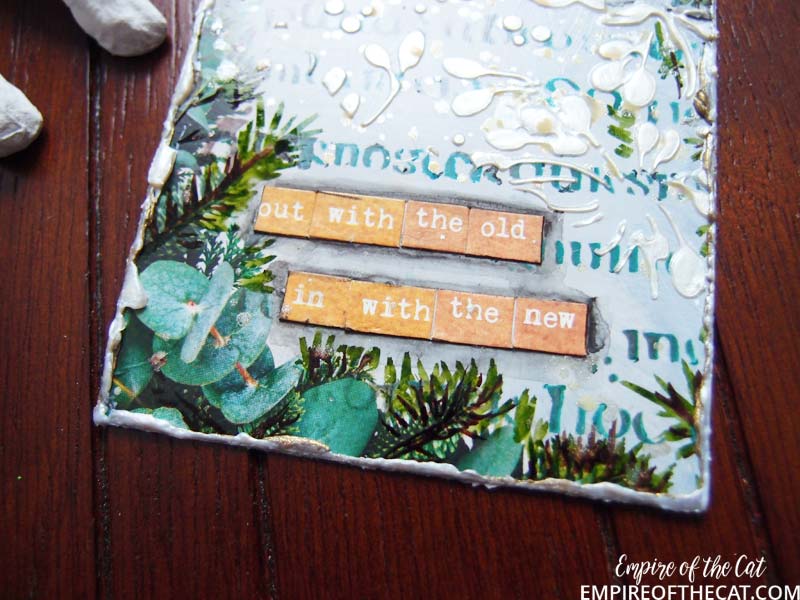 And that’s the finished tag – oh I also added some paper cord and sinamay to add to the rustic feel. 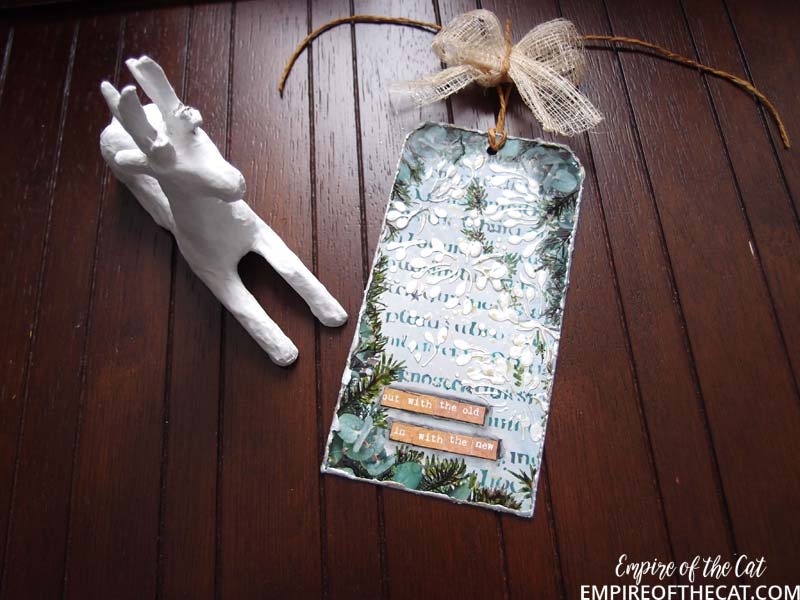 And just when you think that you’re finished… I decided to also make a matching ATC!   I used more of the same festive packaging, and the same stencil and paste,and then I added some gold around the edges. 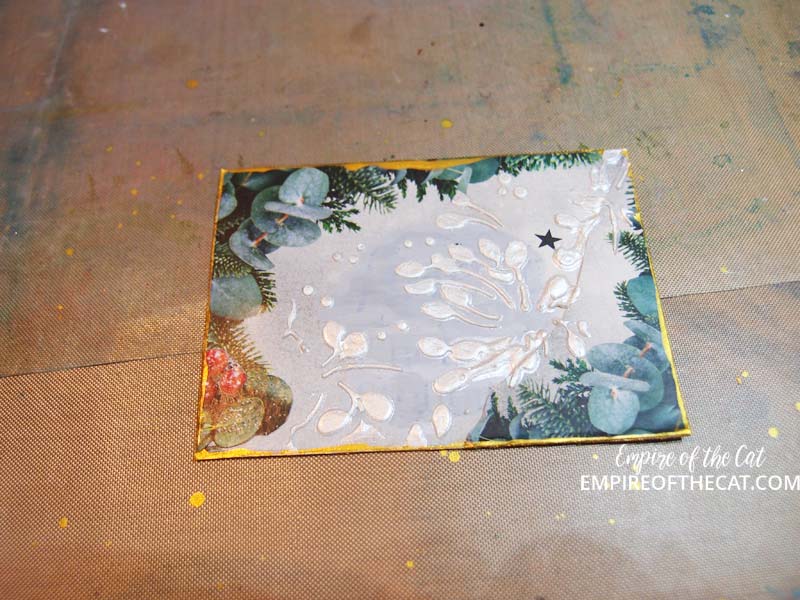 Like before on the tag, I added some extra foliage. 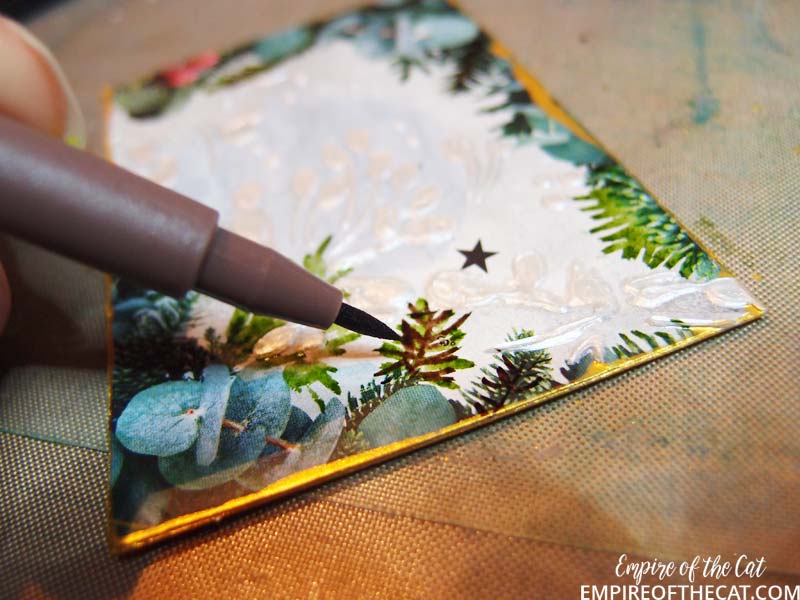 When it came to adding some text, I did some practice hand lettering, but in the end went for the same stickers as I used on the tag, but in black this time. 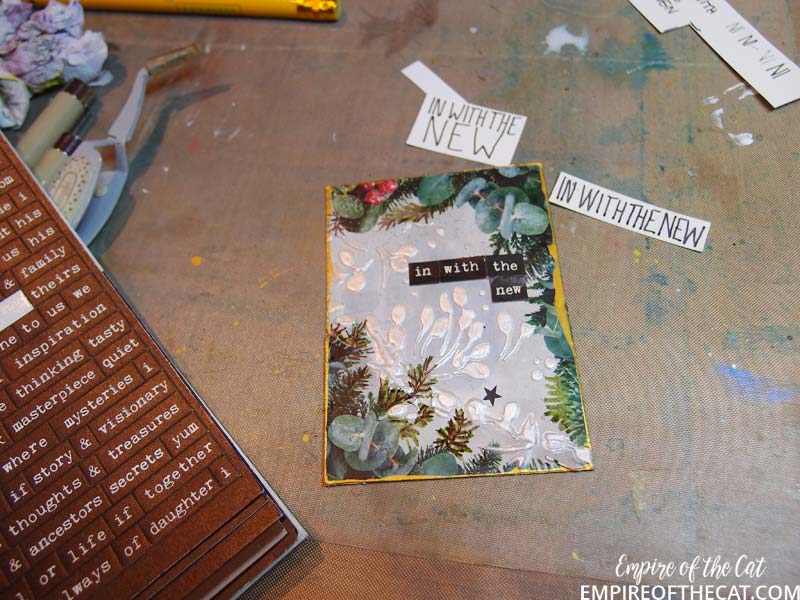 Here’s how the finished ATC looks. 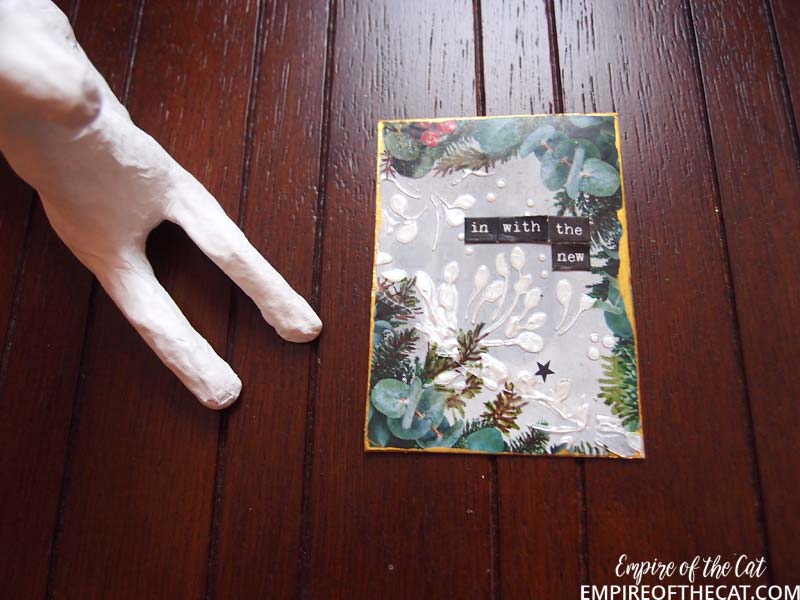 And here they are together, tag and matching ATC. 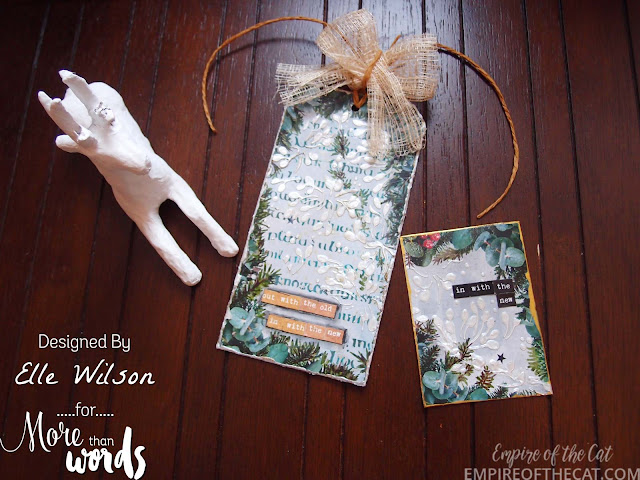 More Than Words Mini Challenge – This challenge requires you to use a specific word on your project so the word NEW has to appear on the card.  Entry for the Mini Challenge is now also held on the blog under the relevant post. Visit the MTW blog for more details of prizes and sponsors and some amazing inspiration from the Design Team. 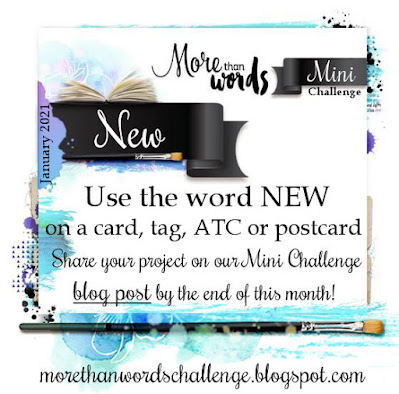 Trust in the Magic of New Beginnings

Thanks for visiting today. Your comment is really appreciated.

2 thoughts on “Out With The Old, In With The New”