Ravens Black on the Winds of Night

One of the courses I am doing this year is Book of Days which is a year long art journaling “deep dive” by Effy Wild. As part of this course, Effy does these regular live Journal Jams where she pulls prompts and then paints and journals in response to the prompts.  She did a lot of these last year for free during the first lockdown so you can still find them online if you want to play along.  This particular one is part of the course though so it’s not available to watch.  So far this year, I’ve missed nearly all of them live but have managed to catch some replays, but not until this time, managed to create anything in response.  So last night (a day after the live!) I decided I would shut the door, sit down and just follow along and see what happened.  No pressure, no need to finish it, no idea what was going to happen or how it was going to turn out, or if I would end up with anything at all!

And here’s what happened: 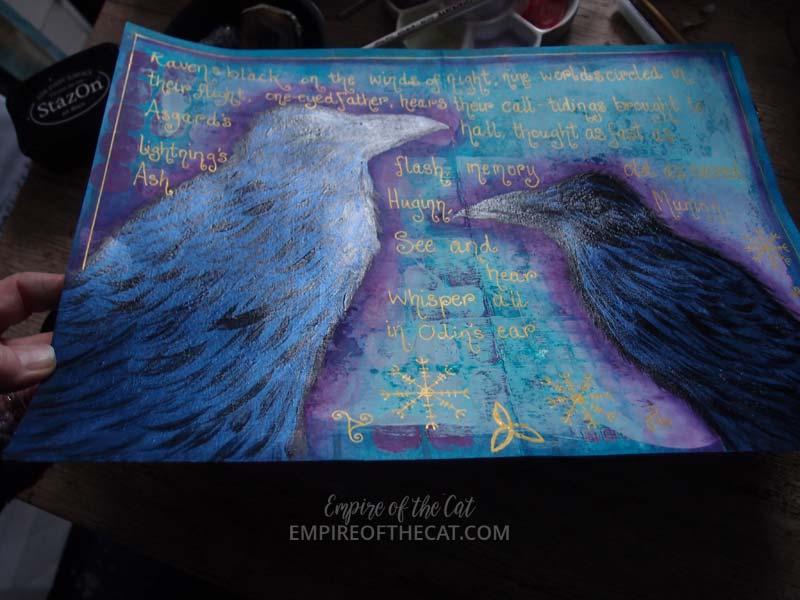 I’m so happy about how it turned out!

Since it’s part of a class lesson I can’t share all the steps but I will show this photo which is near the start of my page and at this point there had been three prompts out of a total of about six I think. 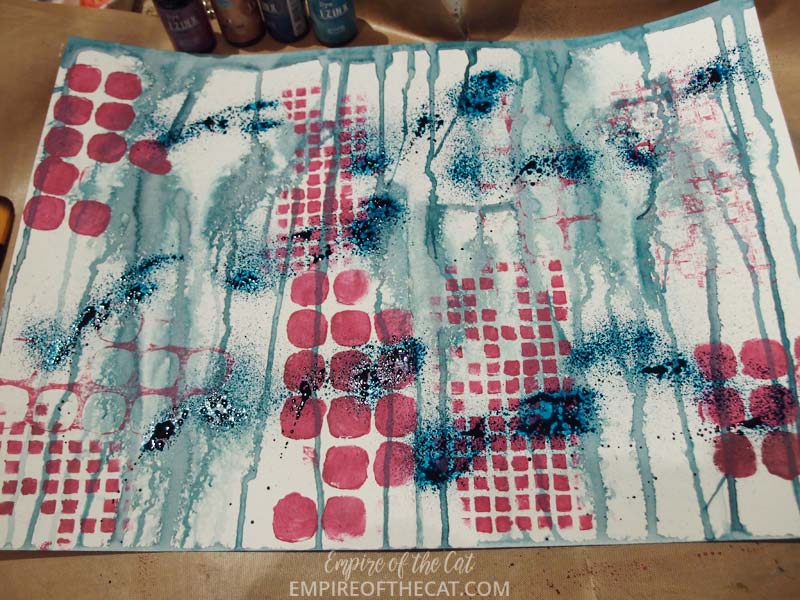 And this one which is a little further long… 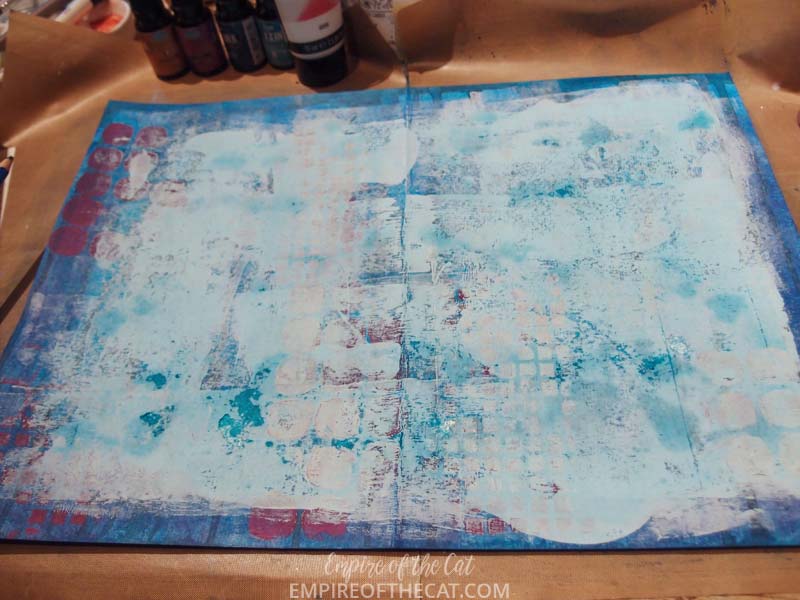 Here’s a closer look at some of that texture 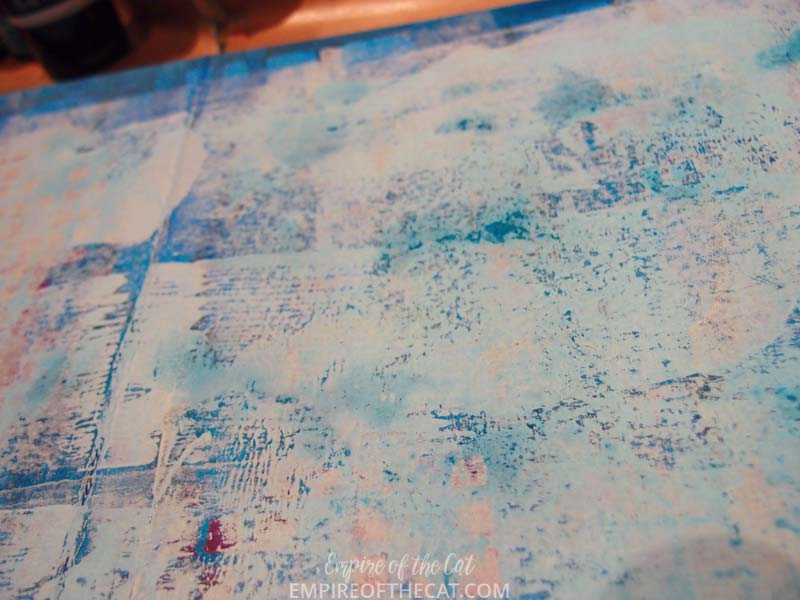 As I was following along with the same prompts, at one point I had to add a bird, so I drew a basic bird shape out of an old box.  I have no idea what kind of bird I thought I was drawing but it has no feet lol 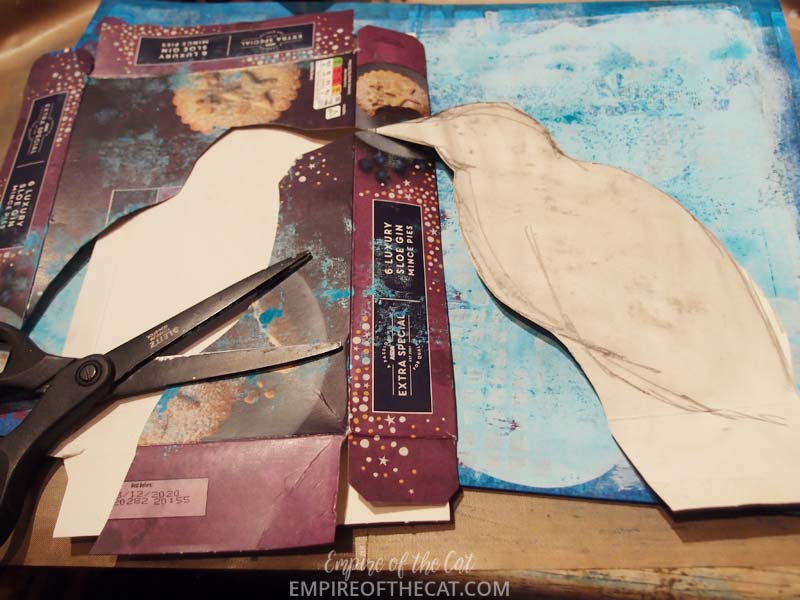 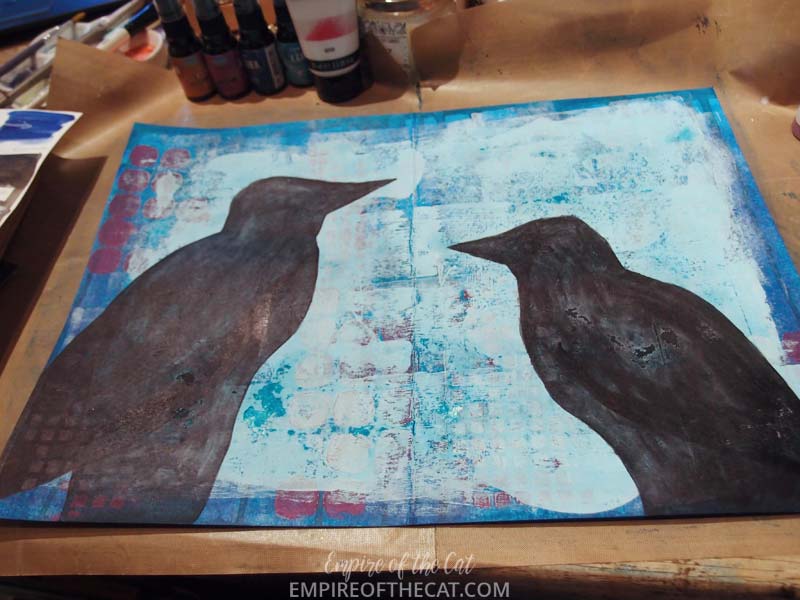 And that’s more or less where I left it last night as I didn’t know where to go with these two weird looking birds.

So today I looked at it with fresh eyes and decided to try and make my birds into something resembling ravens, or crows, but I tried for ravens.  I started by fixing their beaks – ravens have much larger beaks. 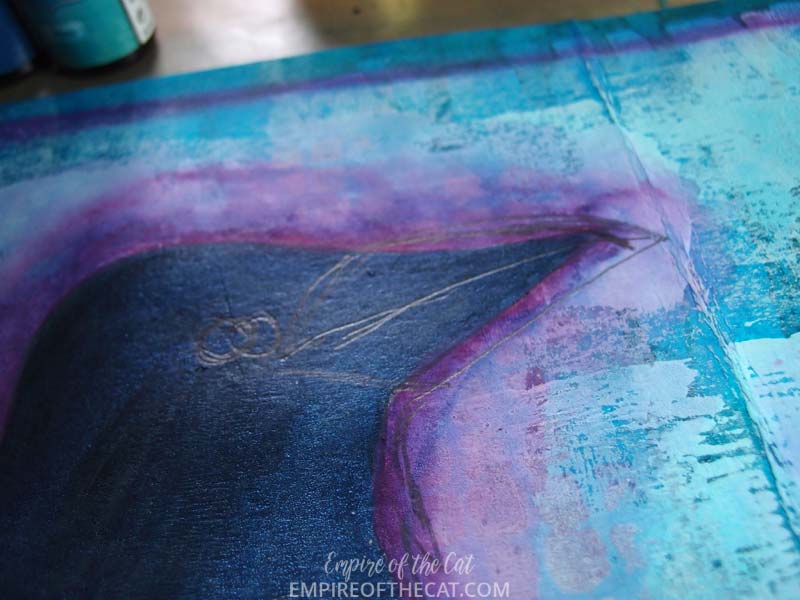 After that, I worked a bit more on the ravens and as I was doing that, I had an idea to make them Huginn and Muninn – Odin’s ravens from Norse mythology.  I found a poem about them and wrote that on across the background and added some Viking symbols to represent protection and then the page was finished! 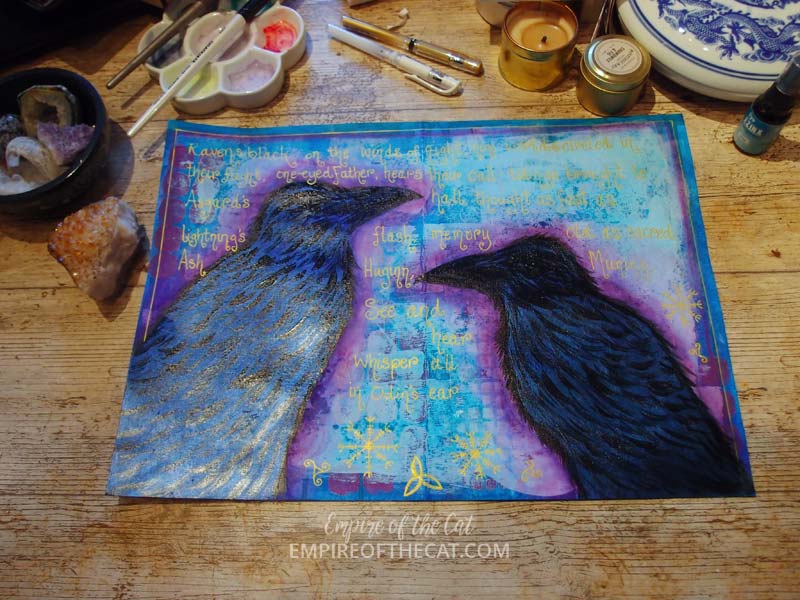 The really cool thing about the paint I used is that it’s iridescent black/blue, so depending on how the light hits it, it looks black like in the photo above or blue like the photo below. 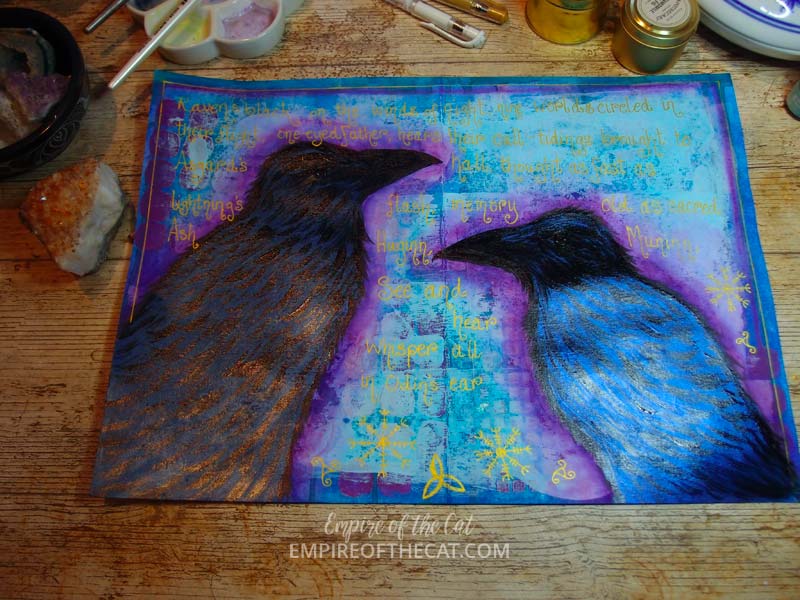 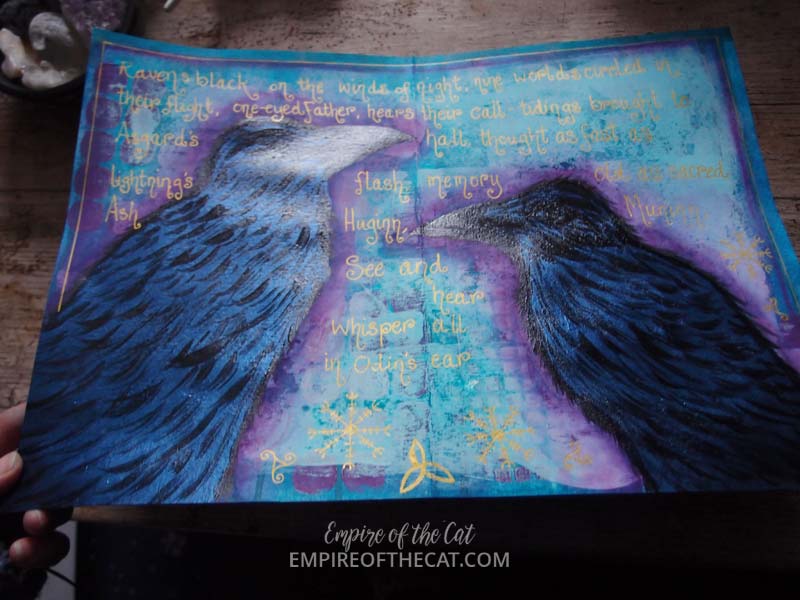 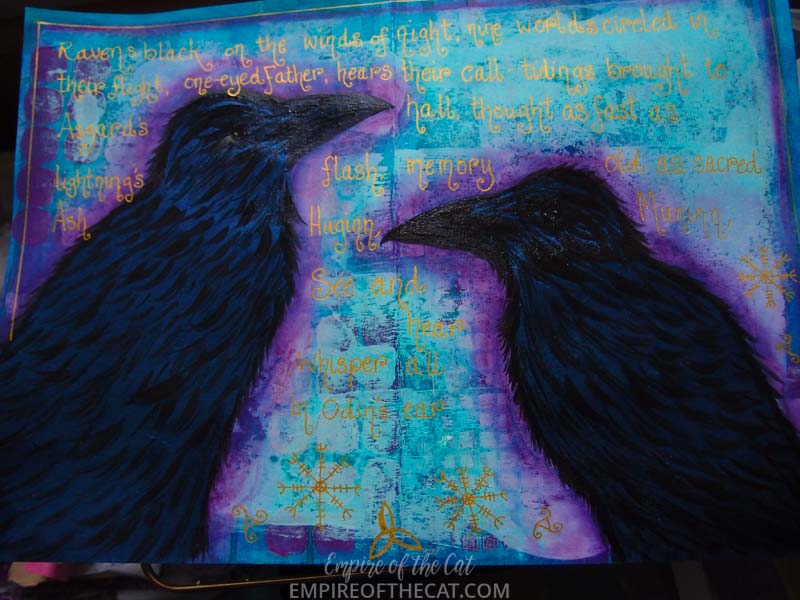 And that’s the finished page. I had so much fun doing this one and having no idea what was going to emerge from it.  Oh and if you want to see the class version from Effy’s Journal Jam, she has it in a blog post here.

Let me know what you think in the comments and as always, thanks for reading!

Listen to Them, The Children of the Night, What Music They Make

I am always amazed at your great creativity with the template of the ravens cut out and the face drawn fabulous., I am enthusiastic about the colors and the lettering
A true work of art, Elle!
Have a good day, hug Elke

This page is amazing Elle. The gold makes it perfect the way to brightens up the page. Raven are such cool birds. And your kitty is adorable sitting there watching you. Great photo. Love seeing your studio in the background too. Thanks for joining us at Art Journal Journey. Hugs-Erika

Wow, Elle, this is so fabulous! I love the mysterious birds, the beautiful background and the good lettering. All in all just wonderful! Thanks so much for linking to AJJ again, much appreciated! Hugs, Valerie

It’s beautiful, the colours are just amazing! Beautiful crows, you indeed should be very pleased, they are wonderful!

Wow! This looks amazing Elle! I really love those birds, and the shading around them, and the gold writing. Everything, in fact. I love corvids, and painted one myself today.
Alison xx