Yes today is National Pet Day (in the US) but I like any excuse to celebrate my furry companions so this is a pet appreciation post.  If you also have furry/non furry animal companions I would love to see your photos so link me to your posts in the comments and I’ll come visit.

My current furry companions are between four and seven years old and all appeared after my previous beloved cats all passed after 15, 17 and 18 years.  It was heartbreaking but I won’t talk about that now because we are celebrating what we have in our lives right now.  As I (try to) write this, one of them is demanding my attention, she’s a funny little thing and her name is Lily. 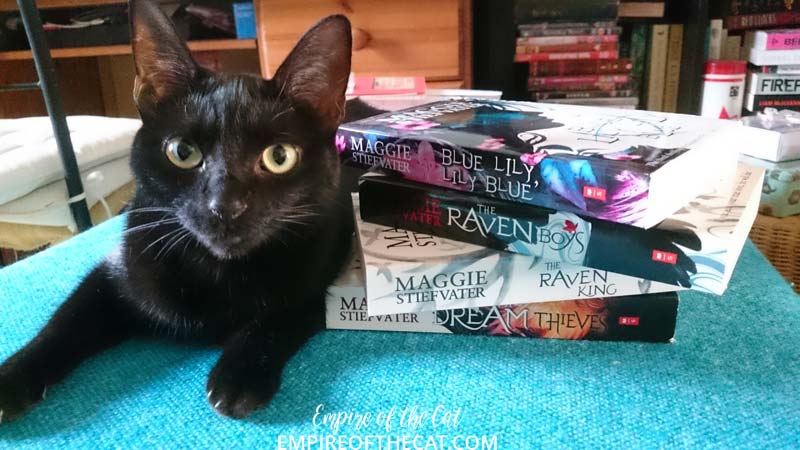 Both her and her brother, Gansey, are named after characters in this book series, which I just happened to be reading at the time that they arrived.  They are litter mates obviously since they are siblings, and are just over four years old. 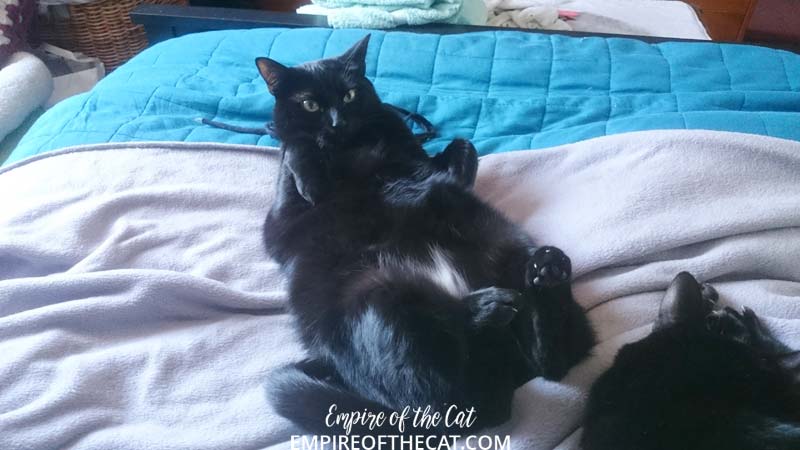 They used to be tiny and poorly and a little bit scared when they first arrived. 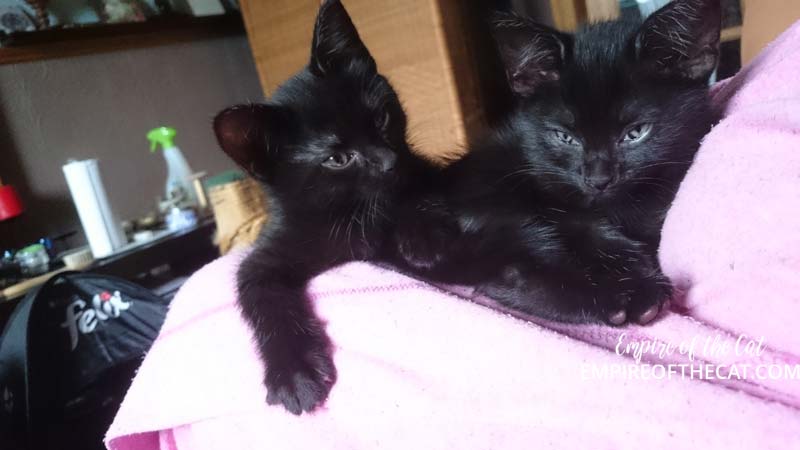 But now they are none of those things. They are guardians of the books! 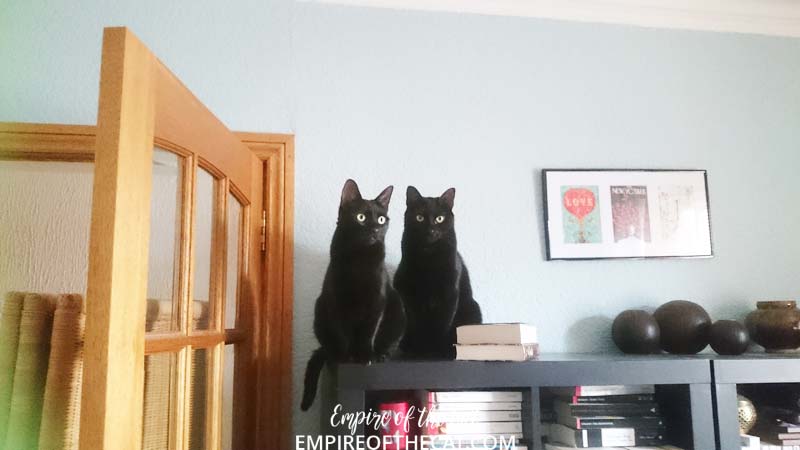 From day one they were both screen obsessed – kids these days eh!  LOL  Big screens, small screens, phone screens, tablets, you name it, they will get in front of it. 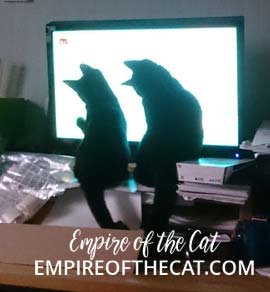 When I realised how interested they were at only seven weeks old, I found them some cat games to play 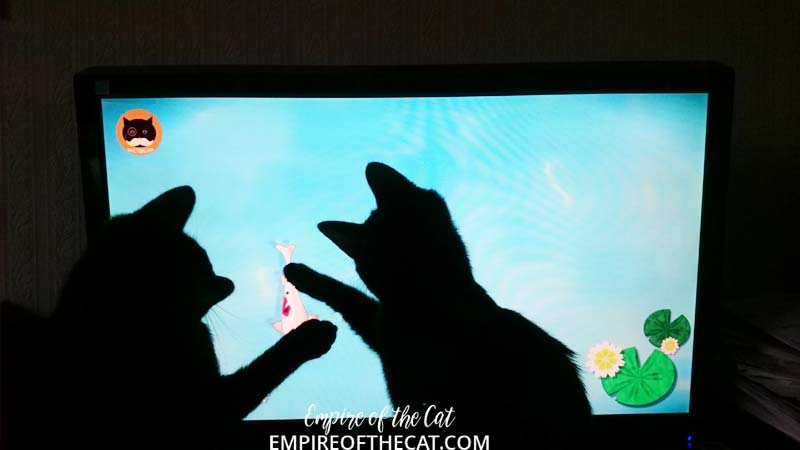 Lily took to it immediately and remains the reigning champion!

Gansey can be a little slow on the uptake but his sister is sharp as a tack, so he watches her first to see how it’s done. 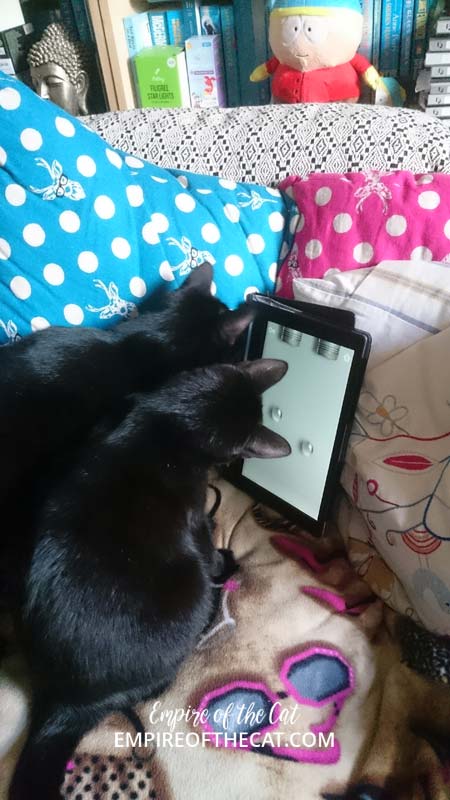 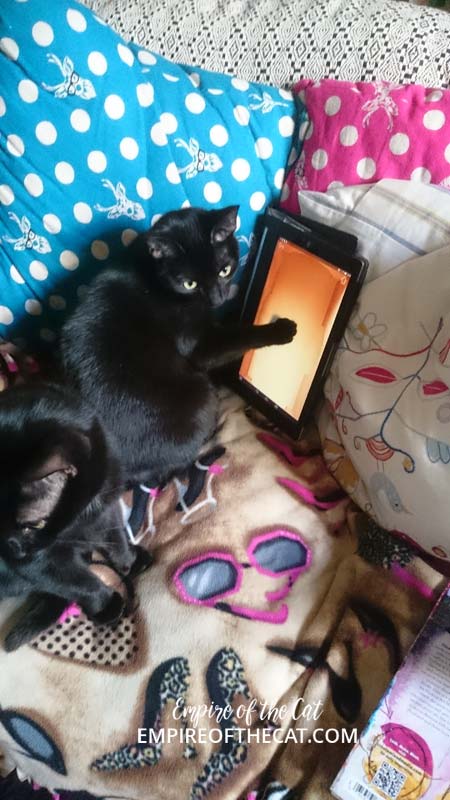 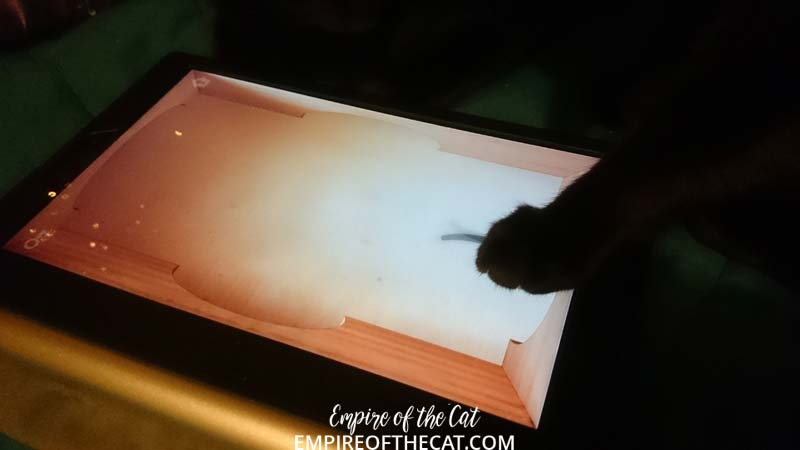 And then there is kitty number three, who was here before these two little monkeys.  She turned up one day in the garden and decided to stay.  After a few weeks of feeding her I managed to take her to the vet for a check up and to see if she might belong to someone and was micro-chipped, but the cat rescue people happened to be there at the time, and recognised her as a farm/feral cat that they had recently released as part of their catch/neuter/release program and were amazed that she had turned up where she did.   So we kept her, first outside in a cat kennel and then she moved into the sunroom.  She doesn’t like kittens, or any other cats so they don’t mix and she spends a lot of time outside, but comes home for meals and bed – a bit like a hotel guest lol.  We tried to name her with a nice cute name but she ended up naming herself as she only answers to one thing – Plata – which was an accidental word but as soon as I said it she responded and it stuck. 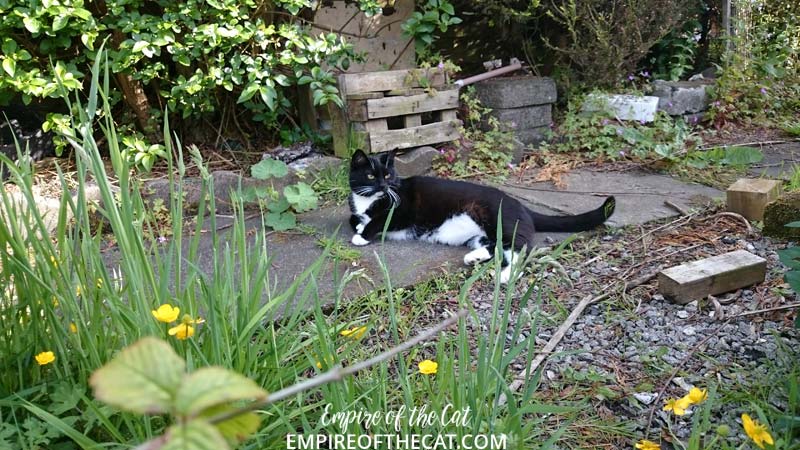 She is living her best life though… here she is sleeping in a planter pretending to be a plant. 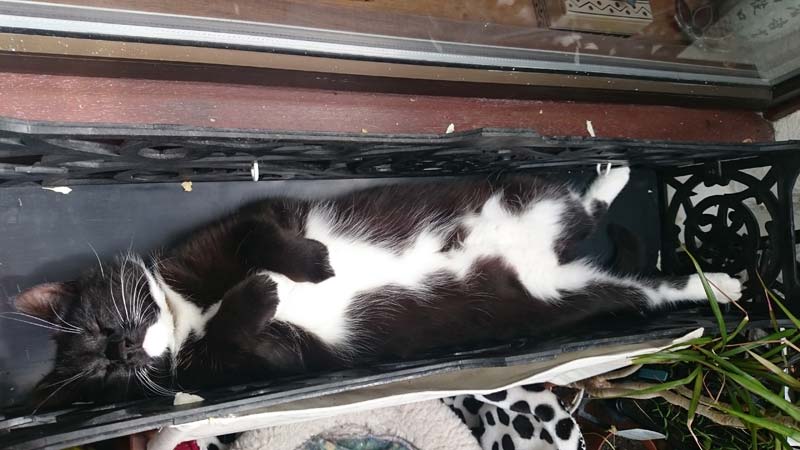 So that’s my offering for National Pet Day, if you have pets, link your posts below as I would love to see them!

Links to all the days of the April blog along
April 1st – Day 1 – You don’t have to be perfect to be amazing
April 2nd – Day 2 – Cat hammocks and sneak peeks
April 3rd – Day 3 – Favourite Children’s Books
April 4th – Day 4 – Green Crochet Socks Story
April 5th – Day 5 – A Short Family History of Scones
April 6th – Day 6 – Happy Tartan Day
April 7th – Day 7 The Unbearable Lightness of Old Wallpaper
April 8th – Day 8 Off with their heads my Queen
April 9th – Day 9 – Andy Warhol Cat
April 10th – Day 10 Tiny Book Covers WIP
This month I decided to join in with Effy Wild’s blog along – 30 posts in 30 days and hope I can think if enough things to say. every. day. I’ll do my best to keep up.  The idea is to blog every day (obvs) but also to comment on other people’s blogs to keep the conversation going.  There is a facebook group where you can link your posts and find other people’s to go visit and comment. During April you can find all the Blog Along posts linked on my home page for convenience. If you leave a comment, I’ll be sure to return the favour!

Cat Hammocks and Sneak Peeks – Blog Along With Effy Day 2

They are adorable and seem to have such a great personalities.

That’s so cool! I love Maggie Stiefvater <3 I miss having a cat companion

Such smart kitties- and pretty, too.

Those kittens though!!! So sweet!

Oh the cuteness of your fur babies!!! We have 8! One was brought home one day by one of our in and out cats. When he was brought home for dinner as the story goes, the poor thing was covered in foxtails. So he earned the name Stickers. He disappeared for almost a year, but then turned back up one day with a fox tail in his eye. We took him the vet and had him treated and he’s been an inside cat ever since. But he doesn’t mix well with the others. We just play musical rooms to keep everyone happy.

Oh I love your house panthers! I have a fondness for black cats. Sending love for the losses. I lost 5 seniors in 6 years and it is SO HARD. I am going to hug my Lola now. xx

I LOVE all of your cats! Thanks for sharing.

You cats are gorgeous and spunky. Just what I adore in cats.

Oh Elle! All your kitties are delightful! I swear i could see cat hair flying from the computer as i read your post. Lol. You have such a big heart, which Plata obviously knows. Always such an honour when we are chosen by our pets instead of the other way round. And fascinating with her name! Kaden, one of my cats, is at the vets right now for his day of blood sugar glucose testing, (he had diabetes but is doing super well) so i was especially drawn to your post.Thank you for wonderfully filling that partial void for me today! <3