Hi everyone, today I am sharing this big painting that I did as part of Lesson 1 of a recent taster session for Find Your Joy by Louise Fletcher.  This is a painting course but it doesn’t seem to teach you how to paint as in do what I do, but rather gives you some loose instructions supposedly meant to free you up, so I guess more like a coaching course(?)  I *think* it’s more a course for people who are stuck and need some help moving forward or maybe finding what they like to do?  Anyway, I’ll try anything that’s free lol.  It’s been a busy week so I have only had a chance to do the first lesson (of 4) in the free taster session which was all about playing.  Instructions included choose three paints plus black and white, tape off a big piece of paper into six squares, paint the whole thing for 30 mins, mix colours using the colours you chose, make marks etc, dry in between layers, and then whip off the tape at the end to reveal your six mini paintings. The objective I guess is just to play with paint and see what happens and not think too hard about what you are creating – not a painting, just playing. I quite like working this way, with taped off sections, so I was happy to get started.

I made a gif to show all the different layers during the painting process… just click on it to watch it again.  It uses the same photos as are in the post so feel free to skip to the bottom of the post if you don’t want to see all the photos separately.

The biggest paper I have is A3 so I wanted to paint on something bigger so I used this sheet of cardboard that came inside a box from Jackson’s the other week.  I will be using the box also at some point as I loved painting on the last one I received from them. 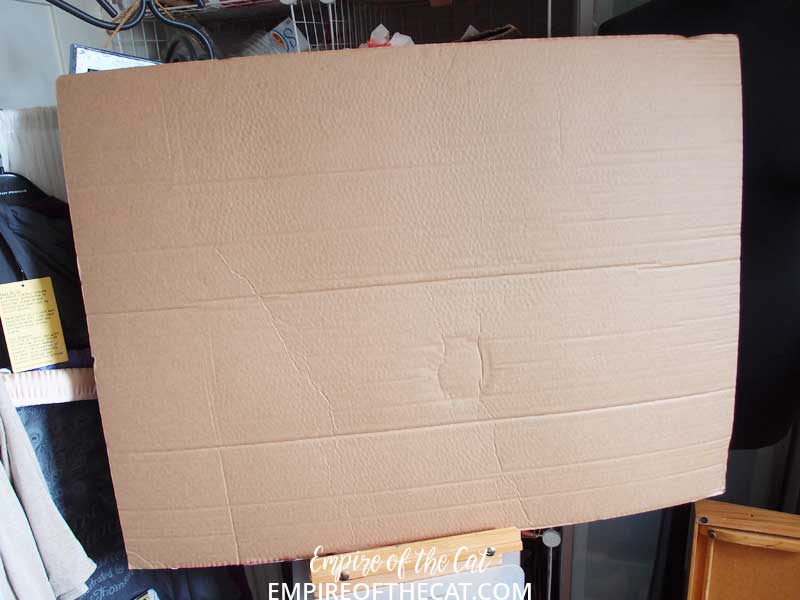 I had a frustrated kitty artist watching everything I did and she was especially interested in the big paintbrush going back and forth across the cardboard and the sound it was making. 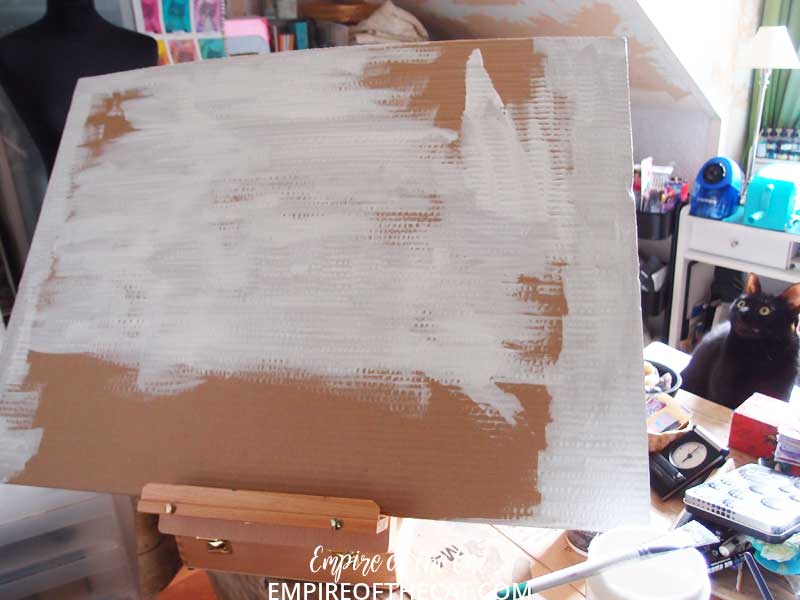 I had to keep one eye on her and one eye on what I was doing as I did not want to try and get white gesso off a black cat! 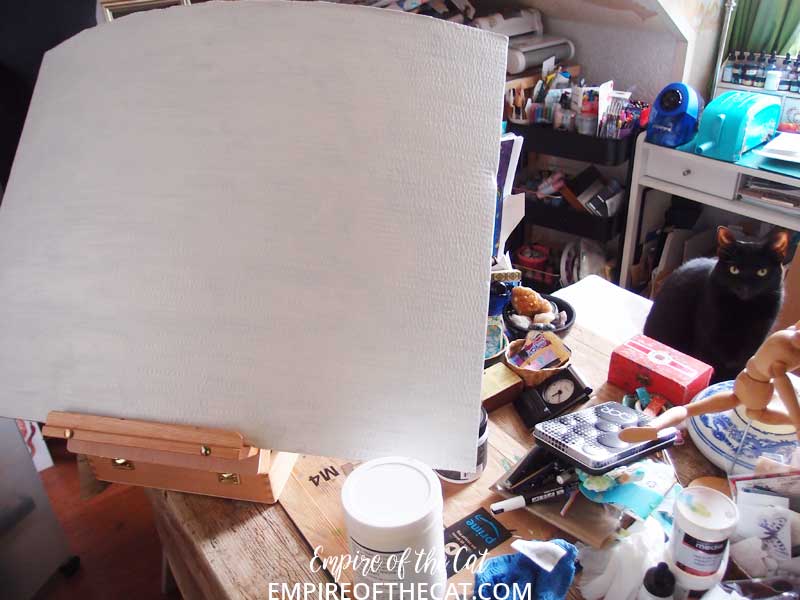 Due to the fact that I was using a sheet of cardboard, I had to tape it down to my table to try and keep it flat as it kept wanting to curl up. I could have fixed that by painting on the other side but it was fine just taped down and adding all the paint fixed it eventually. 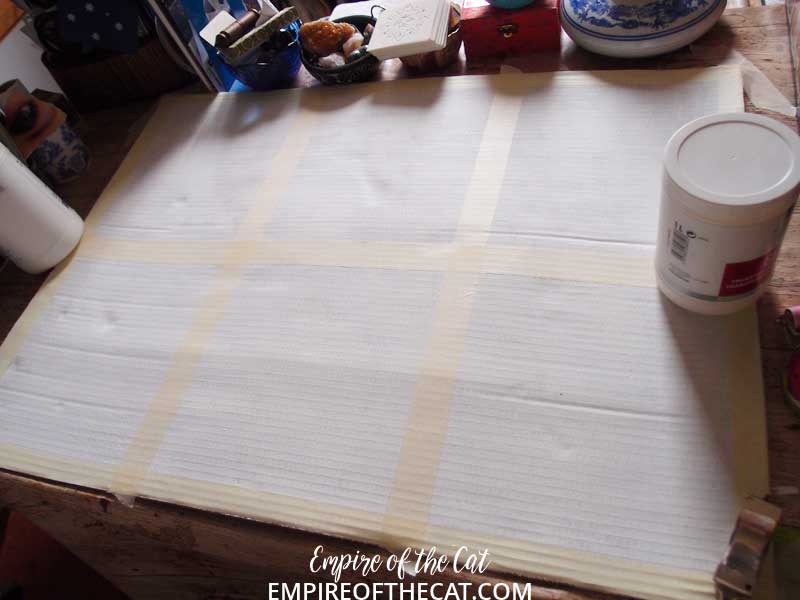 The three paint colours I chose were – Turquoise Deep, Green Gold, Medium Magenta – and for my “black” I opted to go for Payne’s Grey instead, and then just the usual Titanium White. These are some of my favourite colours to use on their own but I also like to use them for mixing as they make a really nice range of purples, turquoises and greens etc. 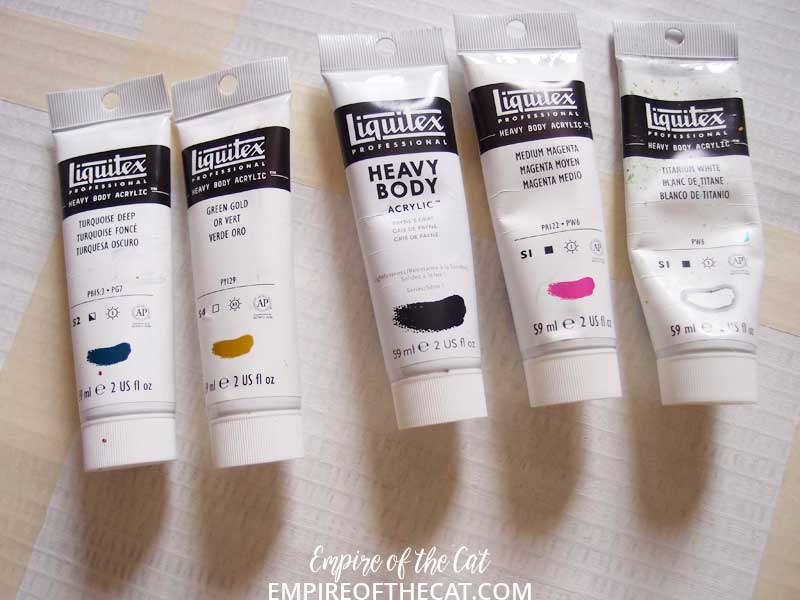 As I’ve learned from previous painting on cardboard experiences, things don’t work as expected lol, so while I set out all these supplies to use, I ended up using hardly any of them because of the cardboard!  For example, the brayer did not give the same coverage as you would expect to get on paper, so it wasn’t doing what I wanted it to do so I had to ditch that. It will give texture of the cardboard but I wanted just coverage and not cardboard texture at this stage.  These palettes were not giving me enough room to mix colours and I ended up using a cardboard envelope (courtesy of amazon). From the tools, I only used one paintbrush, one palette knife, one silicon tool and another little brush that is actually for hair dye hah! Oh and of course, the bubble wrap (and a toilet roll tube that’s not pictured!) 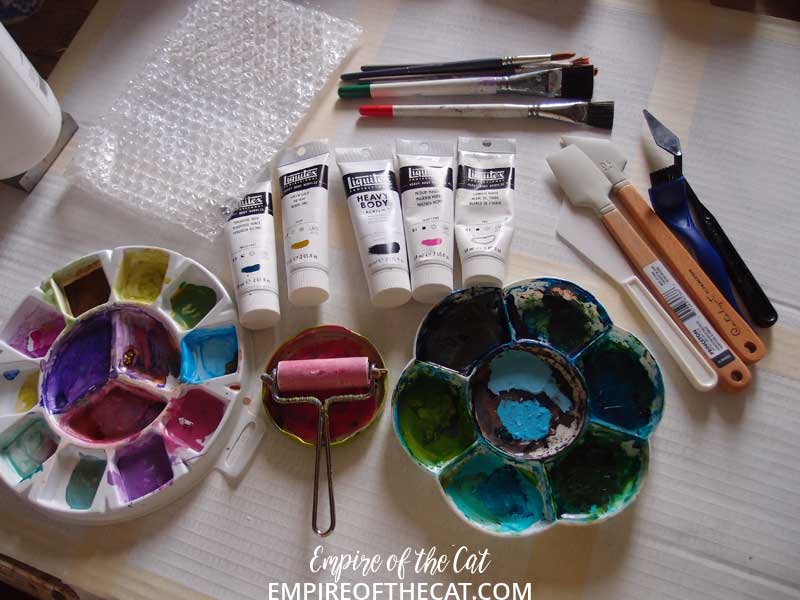 Most of this (luckily) got covered up because I didn’t like it!  The yellow colour is actually the Green Gold but it was very yellow on the white gesso, and I don’t like it. In fact looking at this photo, it looks like I am using three primary colours which is not something I like at all! 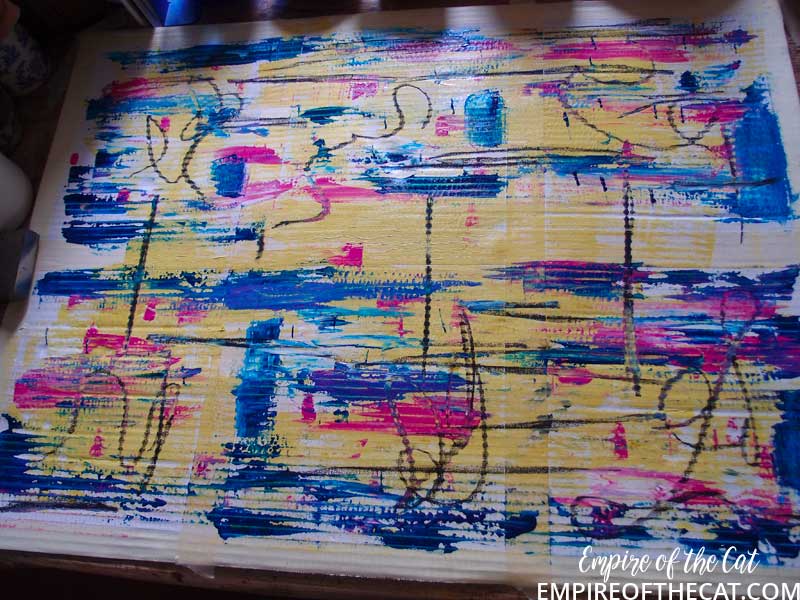 She’s still watching the activities and is just desperate to walk across that lovely flat surface! 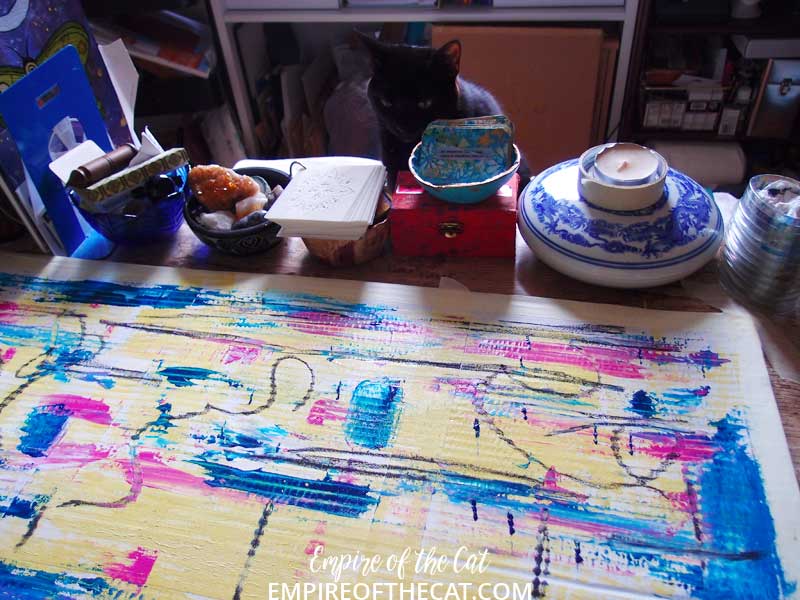 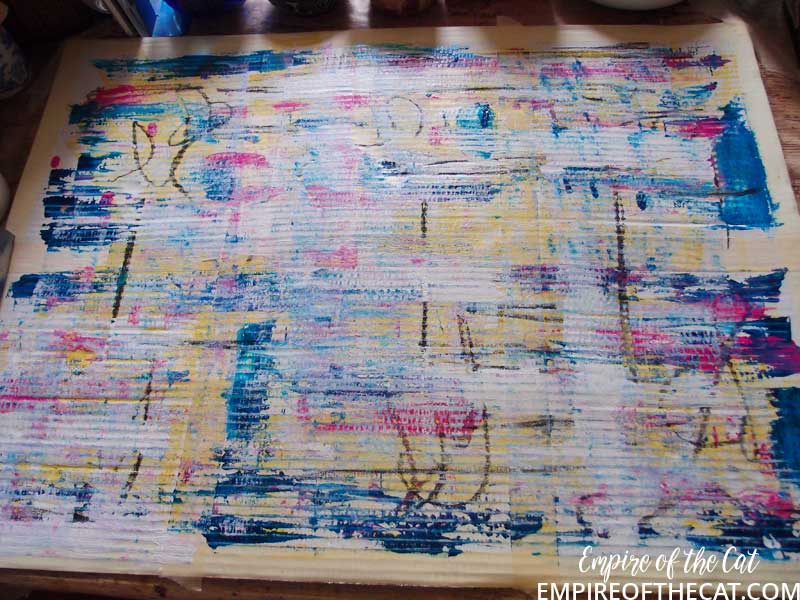 I started adding white with the brayer and as you can see it adds paint very unevenly because of the ridges on the cardboard so I had to do something else to fix this. 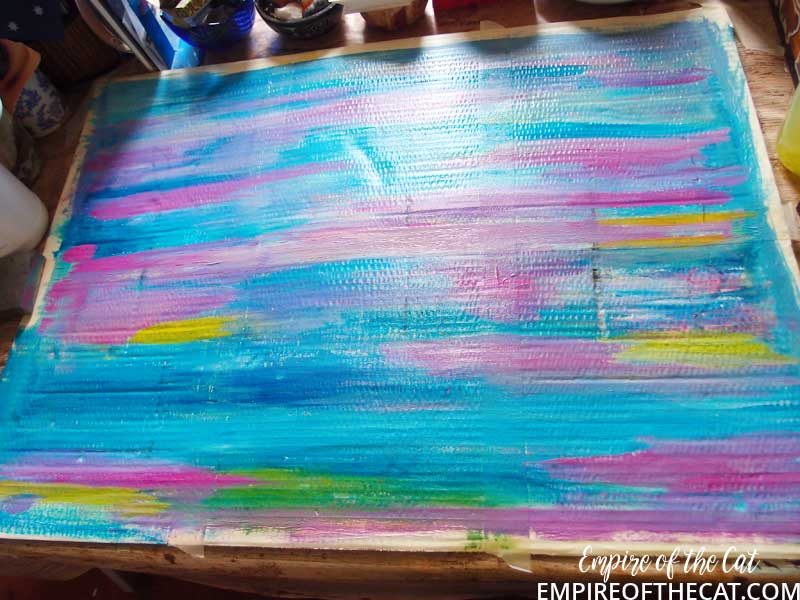 I switched to a brush and some of the other colours (turquoise and magenta) over the white that was unevenly brayered on and added more water to make it move and this is what happened and I liked it much better. This is more me whereas what was underneath is not me. 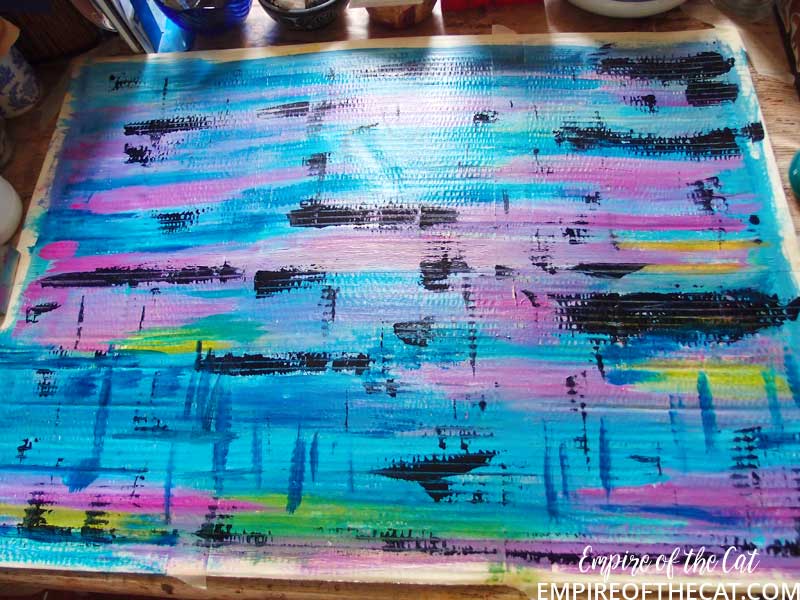 I switched to the Payne’s Grey and added some of that with a palette knife. It started to feel like water or sunset over water? 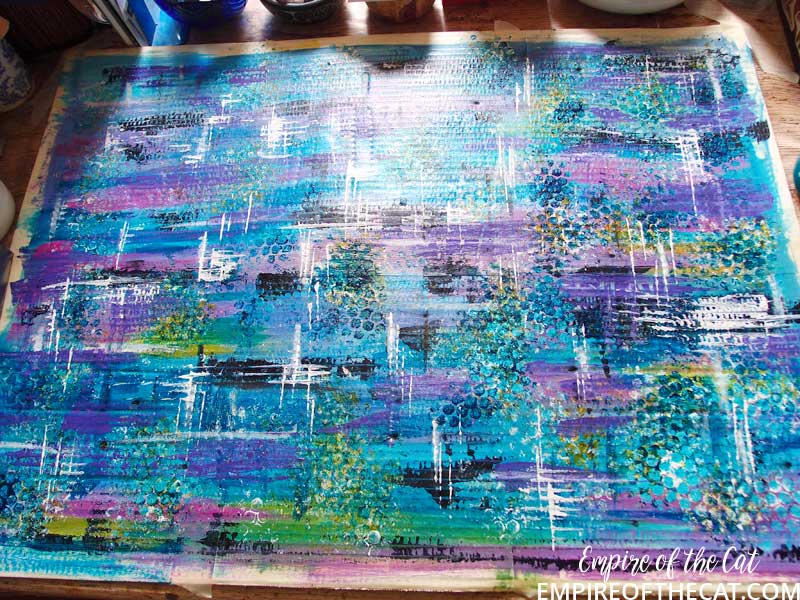 Then I went mad with the bubble wrap and multiple paint colours and added more white with a spatula, I quite liked it at this stage and maybe I should have left it alone lol… 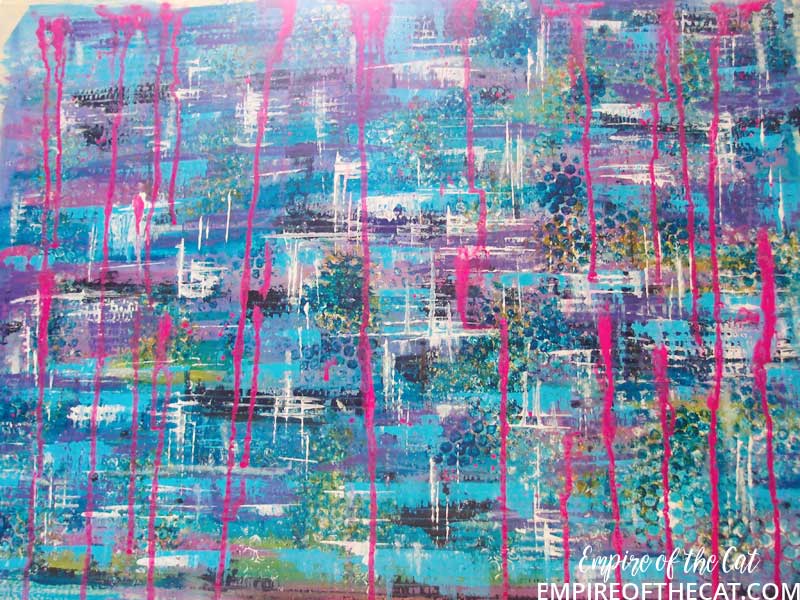 …until I added the drips with Magenta and then I wasn’t so sure, well I was sure while it was happening but less sure after it dried lol. 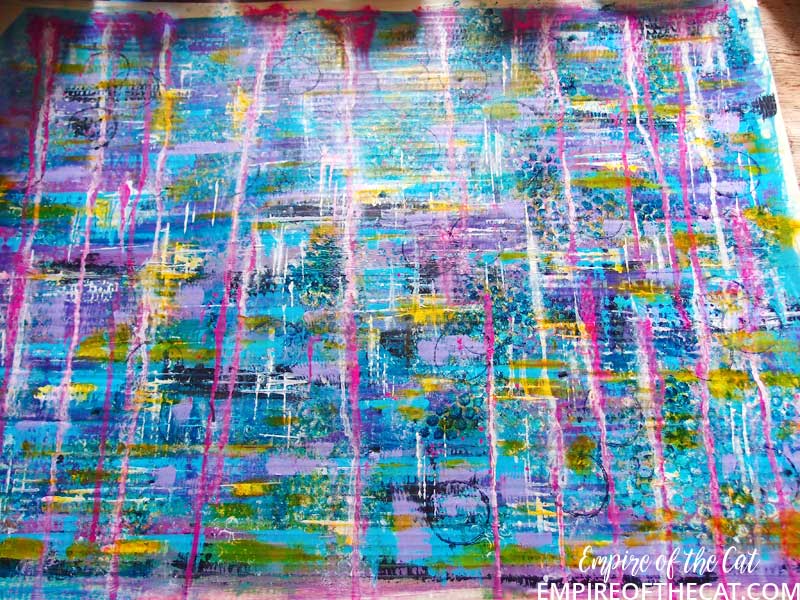 I added some stamped circles with a toilet roll tube.  Then I added a few more layers before I thought it was done and I did spend way more than 30 mins on it, between drying and taking photos, and more drying etc but this is what I ended up with:

The most fun part is of course peeling off the tape to reveal six little paintings: 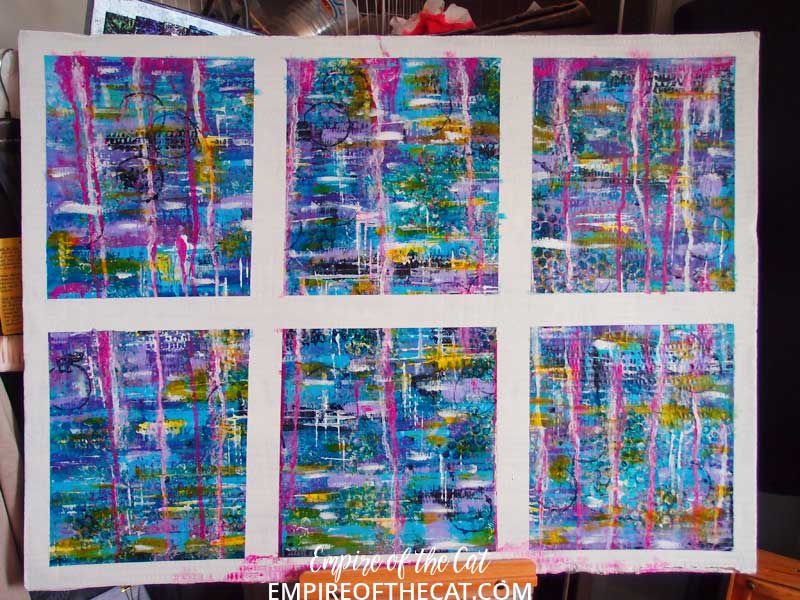 Due to the cardboard situation, and also the amount of water I used with dripping paint, some of it got under the tape and made it to the cardboard so I have some magenta bleeding along the bottom edge, but I can just paint that white if it really bothers me.  This is just supposed to be an exercise after all so I’m not too bothered about it.

Here’s a closer look at each one in order left to right, just click on the images to see bigger versions. 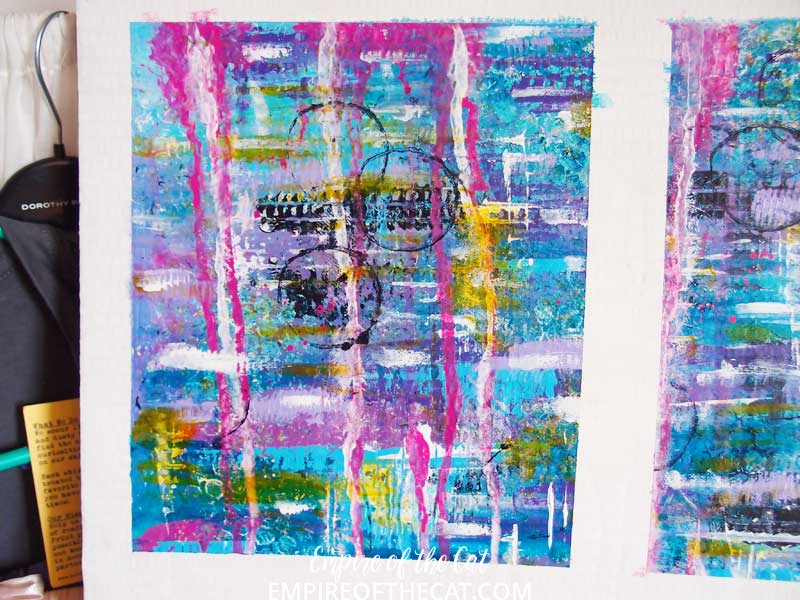 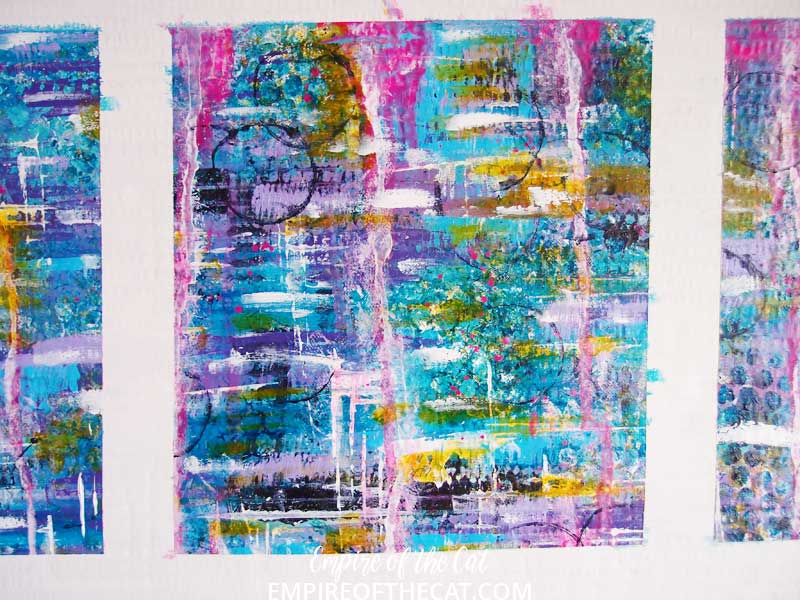 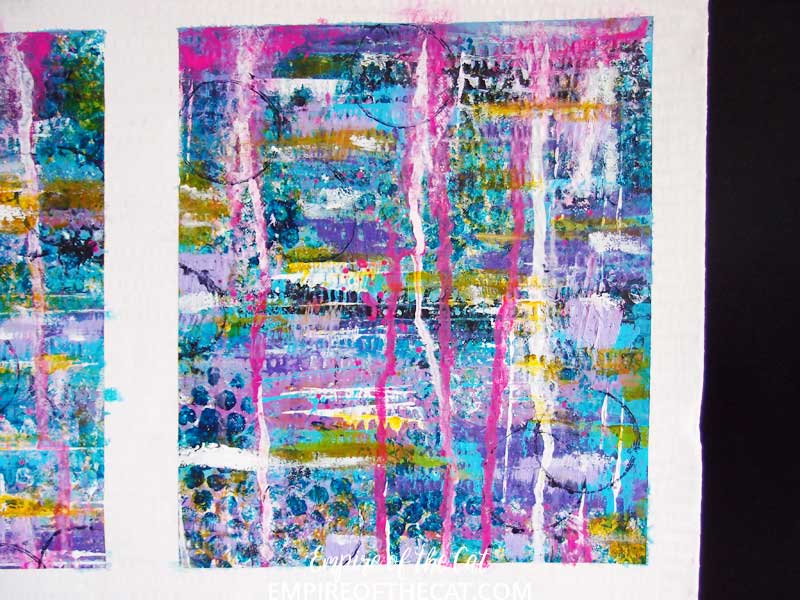 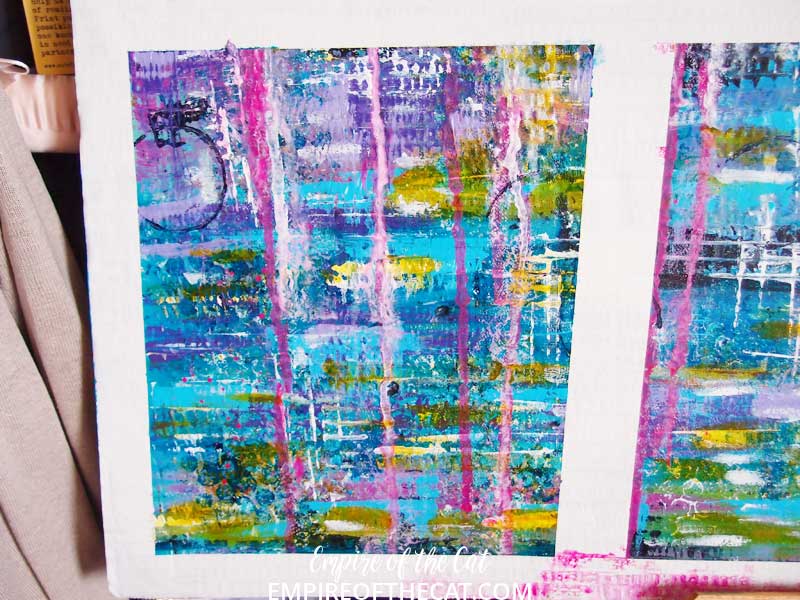 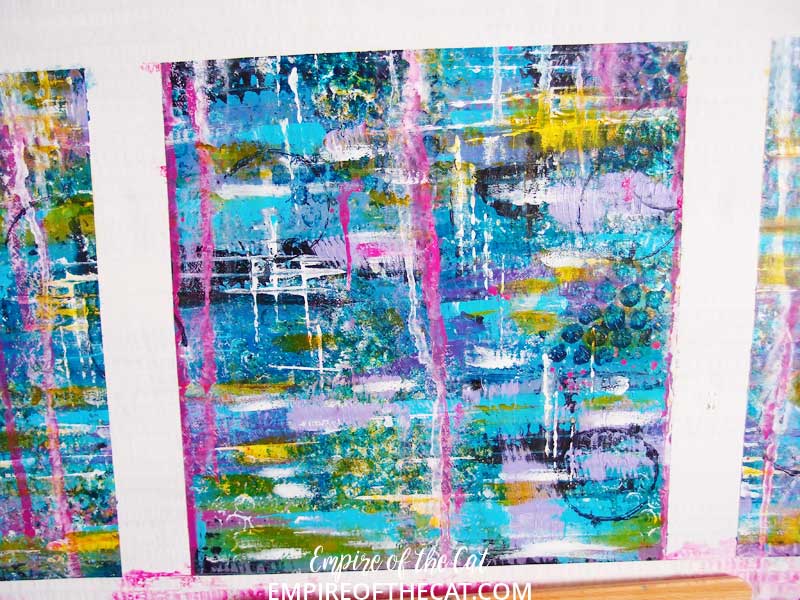 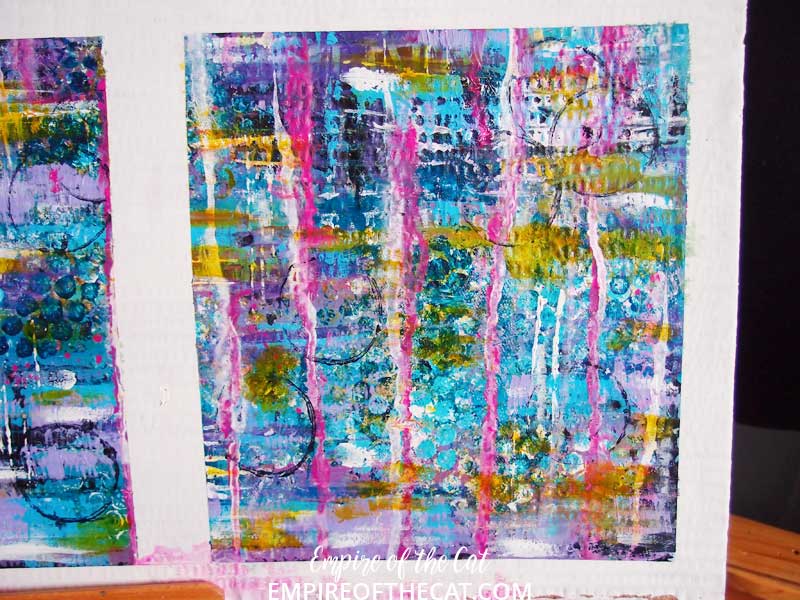 The added bonus of painting like this is that you end up with one of a kind washi tape! I love how it turned out, it reminds me of some kind of impressionist art lol 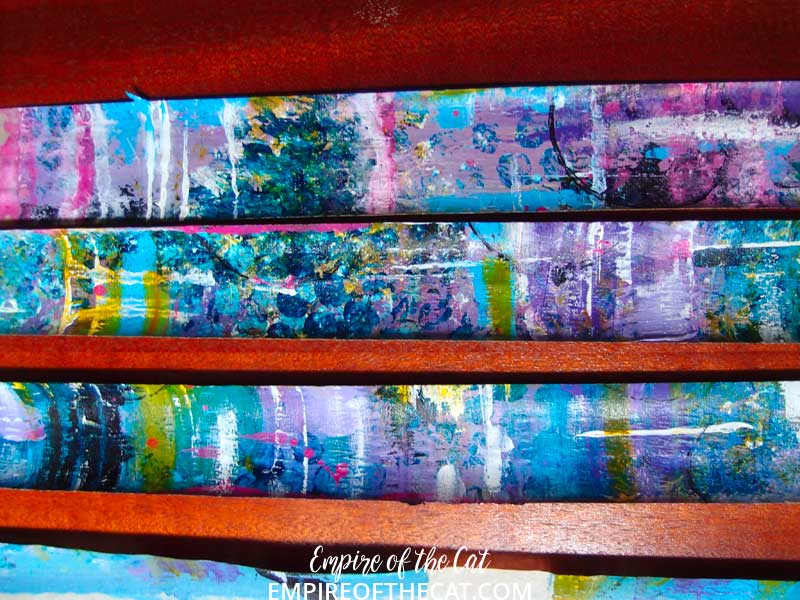 So what do I think of the taster lessons so far?  Well I have only completed Lesson 1 but they are there for another six days so if I have time, I will try to continue with them, but I haven’t learned anything new yet but maybe that’s not the point, it’s more about encouragement I think.  I have painted like this before and in a series with using masking tape to block off areas, it’s quite a popular lesson in many courses too.  The final lesson was on Thursday and also the final FB live Q & A where they announced enrollment for the full course was now open.  The cost of the full 10 week course is eye-watering compared to some others that I am currently doing for a full year, so it would really need to be life-changing for me to consider it at this stage… but then how would I know if it was life-changing until I did it?  Hmmmm…..

Let me know what you think in the comments. If you have any questions about anything in this post, just ask.  As always, thanks for reading! 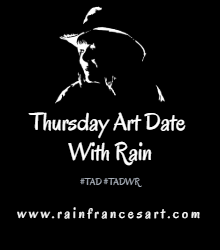 Who Can Believe There Is No Soul Behind Those Luminous Eyes

This is a wonderful piece of art for Rain’s theme.
With the peelable tape it turned out great, a great idea. Impressively!!!!

Nice work! I like the idea of using cardboard.

Hi Elle 🙂 I LOVE this. What a great idea, and I see that the idea is to just let yourself paint freely and let your mind wander! Maybe paint by instinct too, choosing your own colours and strokes! I love how they turned out! Oh you made me remember that one time while I was still using oil paints, one of our cats walked right across my canvas as I was letting it dry and there were little red and green footie prints in oil paint all over my kitchen lol…though I wasn’t laughing at the time!! 🙂