Happy Tuesday!  Since it is Tuesday I am sharing some photos with Bleubeard, Elizabeth and the Tea Gang over on Altered Book Lover’s site.

It’s been a busy seven days since last Tuesday so I am behind with posting up my ICADs though not behind with making them, just not finding the time to get them photographed and uploaded.  After the mammoth day in the garden, it did rain the next day, so I was glad that I did all the work and got things cleaned up before it started.  Then I had to take all of it to the recycling centre, just barely managing to fit it all in the car!  So that was one job checked off the list and on to the next.  The huge job that I am still doing and don’t seem to be getting very far with, is of course, the switching of rooms and finding new places for everything.  I seem to be stuck in that in between state where nothing seems to be in the right place and I am getting a little tired of climbing over stuff to get in and out of rooms lol.  Then this morning I cleaned my car for two hours – it really needed it after the trip with all the nettles last week!

And now on to the next batch of ICADs!  Last week I shared the card for Day 15 since it happened to be the 15th that day, but now I have all of days 10-18 to share (which obviously includes day 15, so it might look familiar from last week.)  If you were interested in more ICADS, the Day 1-9 post is here.

Day 10 – Red Orange – PO73 –  Not an orange fan really but this is a single pigment and very handy.  Lots of little bits from my collage stash, including this cute little orange cat from gift wrap, and the “luscious order” is from some chocolate I was gifted at Christmas.  I kept the box as I thought it might come in useful for something. 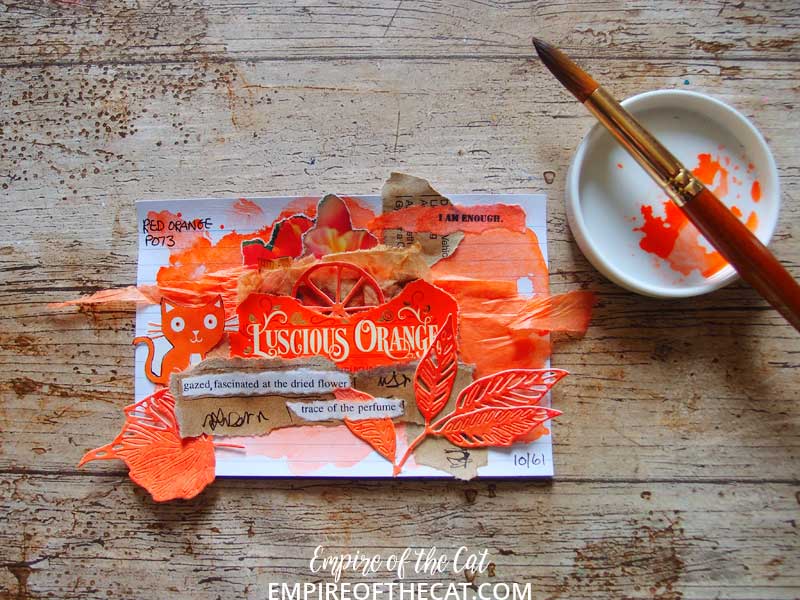 Day 11 – Permanent Yellow Light – PY154 – is probably my favourite yellow.  It’s a single pigment colour so it’s great for mixing and it’s just such a bright and happy colour!  More from the collage stash including the gift wrap yellow bird, some brown envelopes, more chocolate wrappers, and the die cut foam hello. 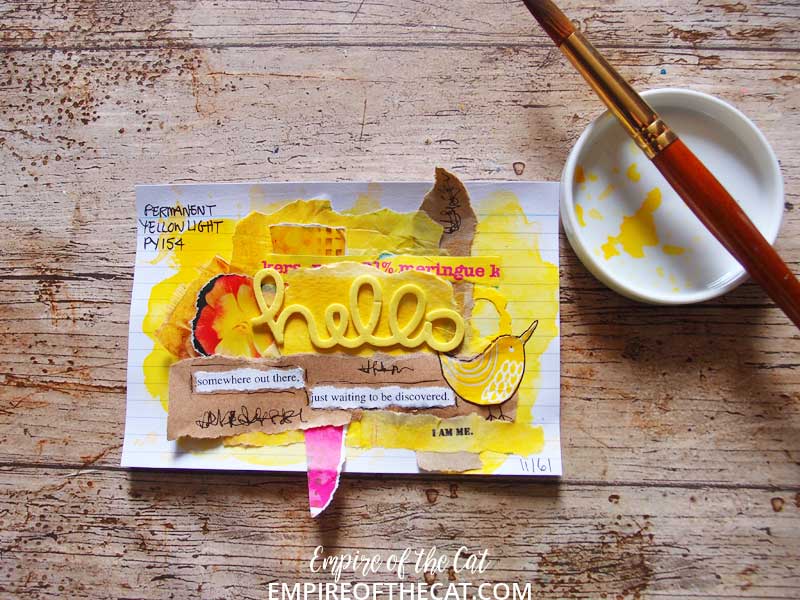 Day 12 –  Greenish Yellow – PY150, PG36, PY65 –  A really interesting chartreuse-y colour which is a mix of three different pigments (two yellows and a green).  This one has less stuff on it, so it’s a bit cleaner maybe, and I got to do some doodling on it too.  Cat food box, book page, tea bag, found words. 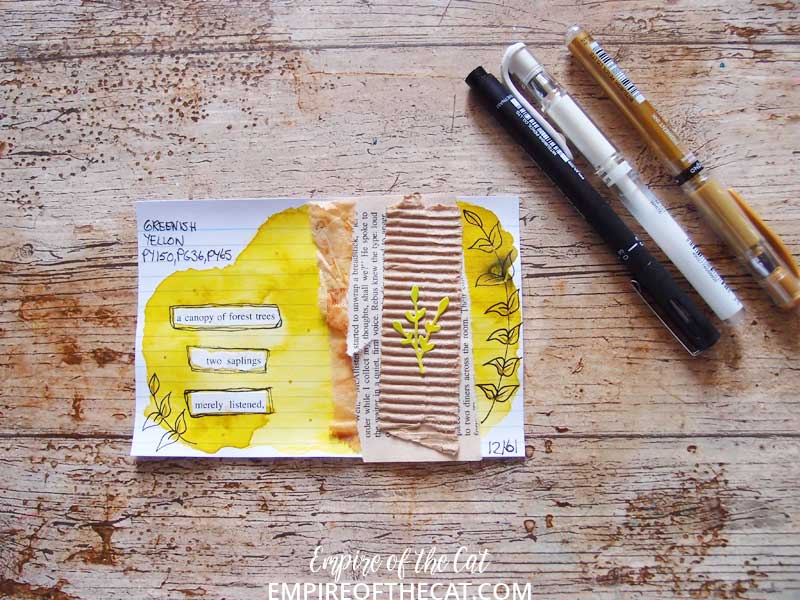 Day 13 – Peacock Blue – PB15:3, PG7 – A beautiful convenience blue made up of two pigments.  Just look at that really dark section on the top right!  Ahhh. More cat food box, book paper, teabag and this stamp which I thought was unused until I pulled it out and it has clear tape over it so I must have cut it off an envelope. 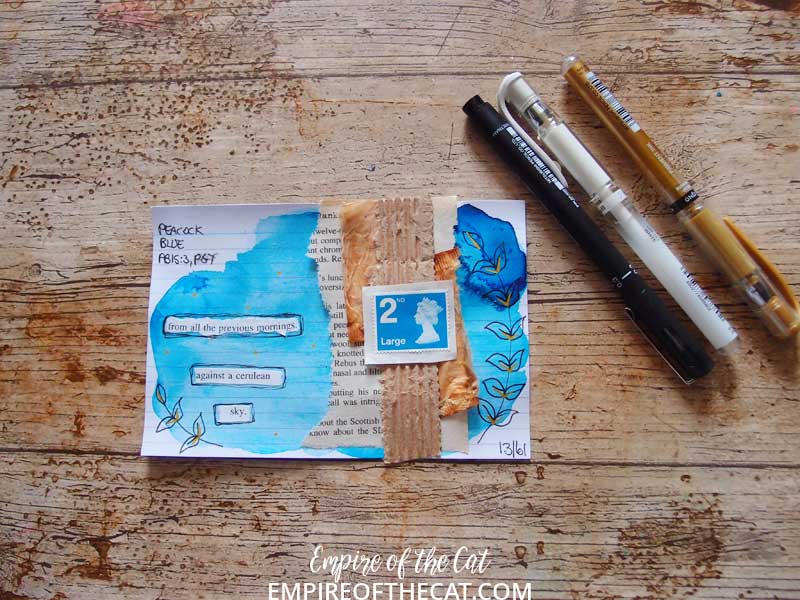 Day 14 – Bright Clear Violet – PV3:2, PB29, PR122 – a beautiful clear violet colour which is useful on it own and can also make a much darker purple with less water, but it is made of three different pigments so absolutely no good for mixing!  Same elements as above except that I found this little butterfly which I think was a printable from a Life Book lesson, and fussy cut it out. 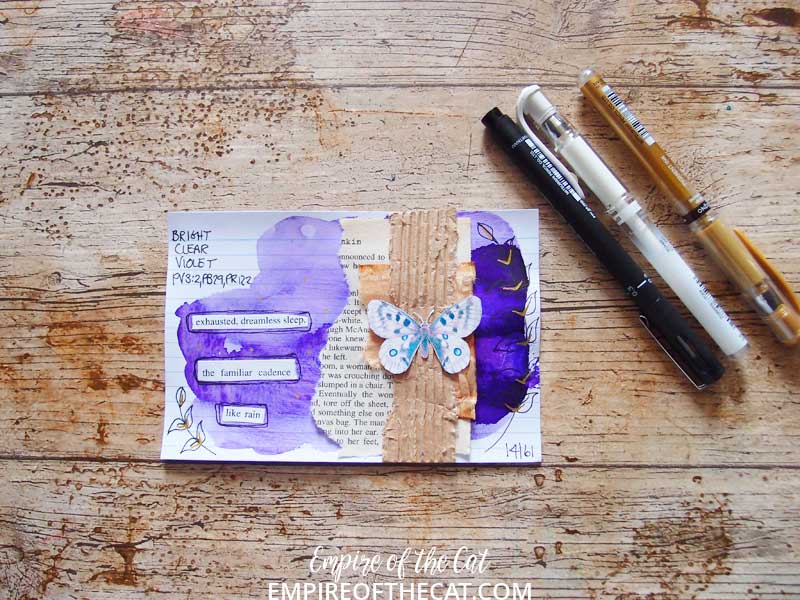 Day 15 – Red Violet – PR122, PB29 – another favourite!  So many beautiful colours are made from these same two pigments, including this one.  I found this previously die cut and not used hummingbird that was painted in almost the same shade. 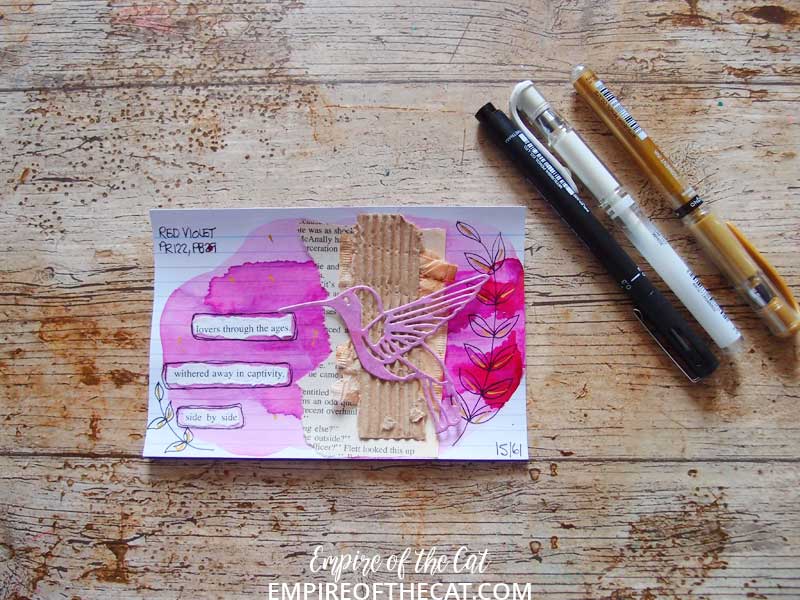 Day 16 – Rose Madder – PR176 –  Another favourite and a very useful colour to mix beautiful purples, but also on its own it can range from pale rose colours to much darker reds depending on the concentration.  I found another cancelled stamp for this one! 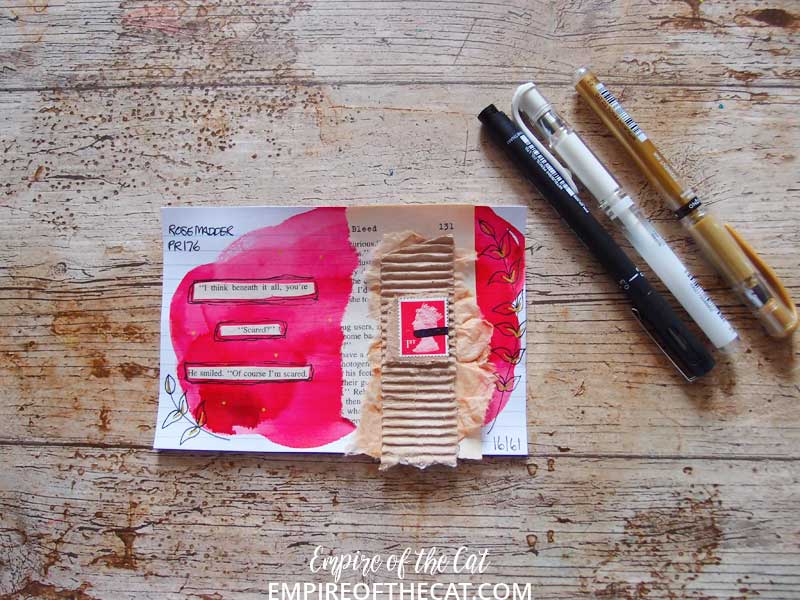 Day 17 – Vermillion PR112, PO73 – a much lighter orange than the one above though it also contains the one above lol.  Another little die cut leftover and more doodling. 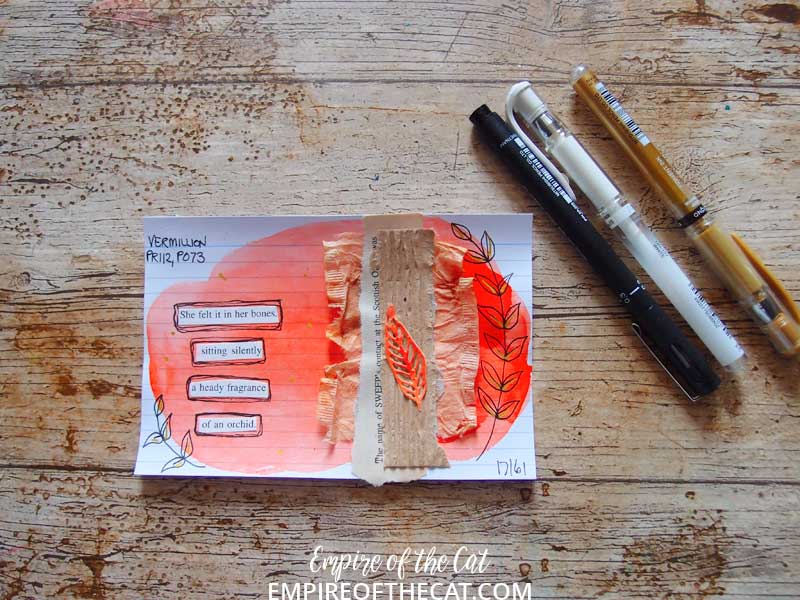 Day 18 – Yellow Orange – PO73, PY65 – This is quite a nice deep yellow verging on orange but not for mixing due to the two pigment composition.  I added another orphan die cut leaf and more doodling. 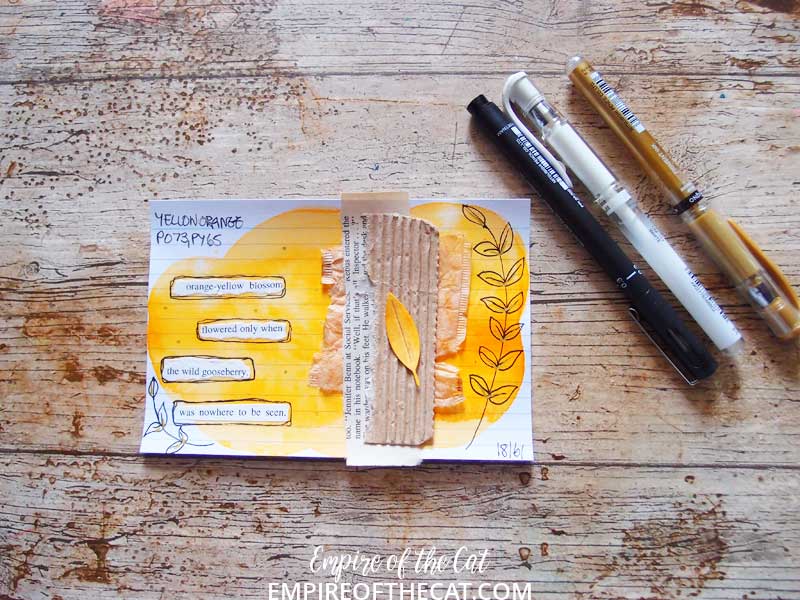 Here they all are in order…  there is a clear difference between the two that I made on day 10 and 11, and the rest of them, which all have a similar format.  I was still working on the same composition as days 1-9 when I got to 10 and 11, then I made a switch.

Last week I showed my rhubarb harvest (totally in the wrong month so I don’t know what’s up with that but I’ll take it).  I was too exhausted that day to cook it all and make yummy things with it. 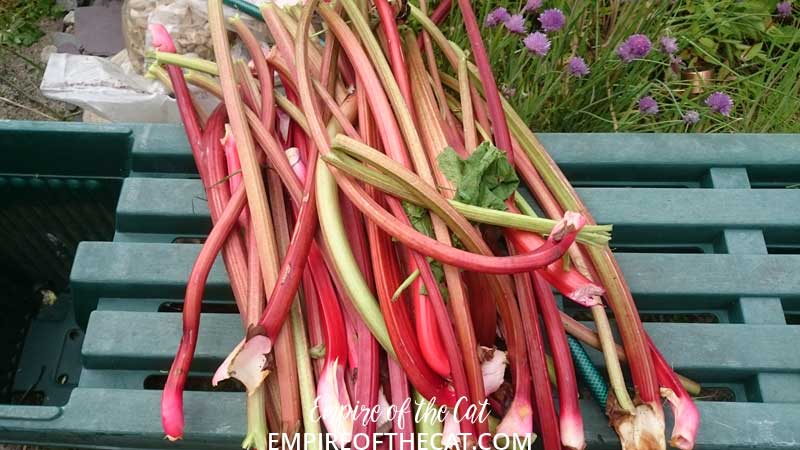 This week has been so busy also, so I still have not made anything that requires a lot of time, but I have been stewing some of it and having it with custard!  This was one of my Dad’s favourite desserts, I always thought it was too basic, and wished for crumble or pie, but I am appreciating it more at the moment for its simplicity. 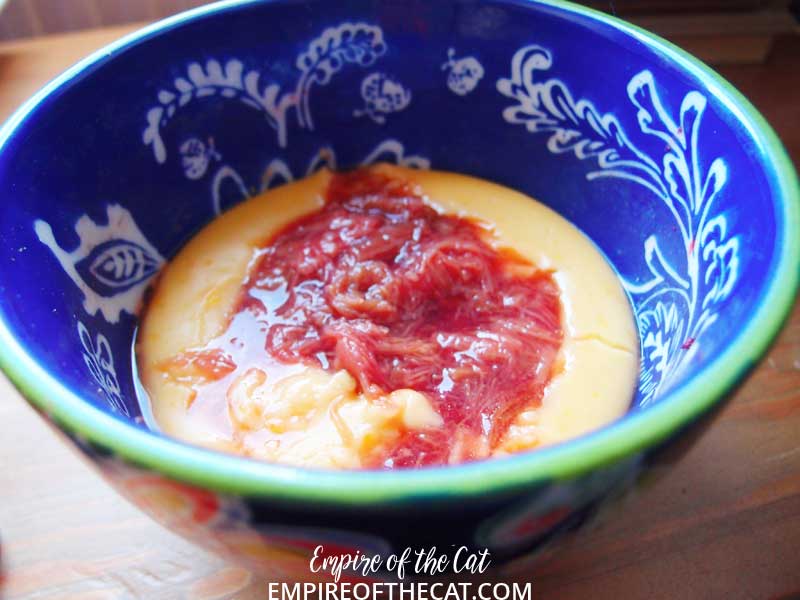 Fun fact about custard, before the time when Bird’s Custard Powder was invented, people made their own “egg custards” using, of course, eggs and other things that Mrs Bird was allergic to, so Mr Bird invented Bird’s Custard Powder so that his wife could enjoy custard again.  What a nice man!  So custard powder is vegan and people like me, get to make it with delicious coconut milk and enjoy custard like everyone else, just like Mrs Bird.  🙂

I am also sharing a photo of today’s lunch: 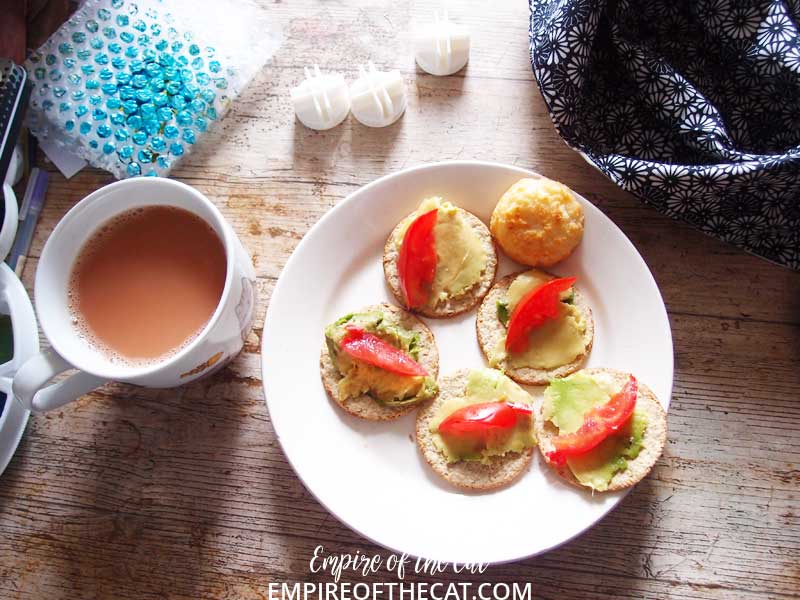 I ate it upstairs on my desk while listening to a podcast.  The desk actually had a clear space that was just big enough for my mug of tea and these Scottish Oatcakes with mashed avocado and tomato, and a vegan coconut macaroon that I did not make.  These are from Mrs Crimble, a biscuit brand, who has made these macaroons (not macarons) for years but now have a vegan version, with and without chocolate.  I bought the without chocolate version, and they are OK but having tasted the original, non-vegan version, they are not as good and the texture is not quite the same.

Let me know what you think in the comments.  As always, thanks for reading!

ICAD – Day 10-18
T Stands For Tuesday – T stands for tasty decaf tea and Scottish Oatcakes. I’m so boring with my beverages at the moment but all I seem to drink is this decaf!

Don’t Forget To Spread Your Wings

Your ICADs are wonderful and inspiring! Seeing your Rhubarb and custard made me really want some – not been able to get much rhubarb this year – love it with strawberries cooked in with it too! Lunch looks good! Hubby is a big Mrs Crimble fan! Belated Happy T day, Chrisx

How interesting. I never knew Birds custard was vegan. Well, there. What a nice story.
The rhubarb looks lush. I really miss rhubarb. It doesn’t grow here and if i drive an hour and a half to the coast I might be able to get some tinned rhubarb. Just looking at it makes my mouth water.
Your index cards are amazing. I love all the different colours. My favorite is the first one. Orange is my favorite colour as it is the Dutch national colour. My preference is a more ‘burnt’ orange (as I call it)
Happy belated T-Day,
Hugs,
Lisca

Your rhubarb is abundant. I have never grown or tried this but it sounds like something I need taste. Your Scottish oatcakes look so pretty and I bet they tasted good. I looked up the Bird’s Eye Custard Powder and I think I am going to get some. I too am vegan so this looks yummy!

Your index cards are fabulous! I love the composition and the colors that you have chosen.

Loved everything that you shared this week.
Happy Tea Day,
Kate

Elle, your ICADs are great – love the colors, textures and fun bits. The first is my favorite – super fun and the most goodies.

I love Rhubarb and it is is interesting to see how you used it and to hear about custard which I know nothing about but like. Your lunch looks good and healthy – I love anything with avocado. That Mr. Bird was a a great husband! Happy late T-day!

Such beautiful ICADs! I love your rainbow coloured designs with the collaged elements – perfect ?. Rhubarb is one of my favourites and I’d happily eat those oatcakes too with my cuppa today – yum! Happy T Day wishes! Hugs, Jo x

Great index cards; I think that is what they are. 🙂 Happy t Day!

Your ICADs are so dimensional and layered. I keep mine flat, but I sure like how yours look. They are so different and just beautiful. I really enjoy the color theory, too.

Your oatcakes look good. I love both avocado and tomatoes, so they sound delicious. I see you use milk in your tea, too. Thanks for sharing your beautiful ICADs and your tea, macaroons, and oatcakes with us for T this Tuesday, dear Elle.

What a great post, Elle. I adore your ICADs (not sure what an ICAD is exactly but I love them!!) – such fabulous vibrant colours. I love the orange one partcularly, with the kitty peeking out! Ah rhubarb… love it! We haven’t had much yet – just a few stalks. The crowns went in only last year so they may not produce much yet – we shall see. I am with you on the custard! We eat Bird’s Custard all the time and it’s great that it’s vegan – suits us down to the ground. I make it with home-made soya milk, which I think tastes better than with almond milk. My grandmother used to make perfect egg custards and had no time for Bird’s – she called it “that muck”!!! Still, it’s so easy to make, and it beats standing over a double boiler stirring away for hours any day!

Thank you for your lovely comment – sorry to hear of your organising struggles. I haven’t yet reached the pitch of wanting to throw stuff out of the window, thank goodness! I can’t do it every day as I have other things to do and also I get too tired but i’ve made massive progress so far. I haven’t got the TODO yet – poor Cindy has had her own issues to deal with. It suits me actually, because I’m not quite ready to receive it yet, and have my health issues to deal with, and also, this week, major computer problems. All comes at once, doesn’t it…

Hope to see you in Blogland tomorrow. Hugs in the meantime for you and your kitties,
Shoshi x

I too am grateful for Mrs Bird, I am allergic to egg, and I LOVE birds custard, especially when it’s.topping a homemade apple.crumble. My stepdaughter made a vegan cake with it recently and read the recipe wrong, and using a whole pot of custard powder instead of whatever it was meant to be. And it was strangely edible!!?
I’m also hugely grateful for the uprising in veganism, it means I can typically eat anywhere I choose… Except KFC that is. Although I’m not that bothered asbi never much liked fried chicken ha ha

I love the ICADS Elle. They are a rainbow of color, and I must say the way you lined them up draws my eye to them and off of everything else on the page. But rhubarb is good stuff. You really picked a lot. How exciting. Hope you find time to stew it up, and hope you had a great T day too. Hugs-Erika