Blog Along With Effy, Cat Tales, Challenges & Prompts, Fibre Crafts, From the Studio, In the Studio, Jewellery, Make All The Things, My Creative Life

Hello again everyone, today is  Day 14 of the Blog Along with Effy and if you are interested in my Day 1-13 posts for the blog along, you can find a list of them all linked at the bottom of this post, so feel free to check them out too!

This is a “what I did yesterday” post and although I worked for hours yesterday I don’t really feel like I achieved much!

I like to make things.  In fact, I like to make all the things, but the problem with that is that you end up with all the stuff to make all the things lol.  I have always been that way so I have accumulated a lot of really useful craft supplies over the years.  People who do not have arty crafty hobbies will not understand this at all.  They will be confused when they see your spare room as it has no bed.  They will be baffled when they see piles of WIP (work in progress) and UFOs (unfinished objects) that seem to be laying randomly around your living room. They would not understand this at all… 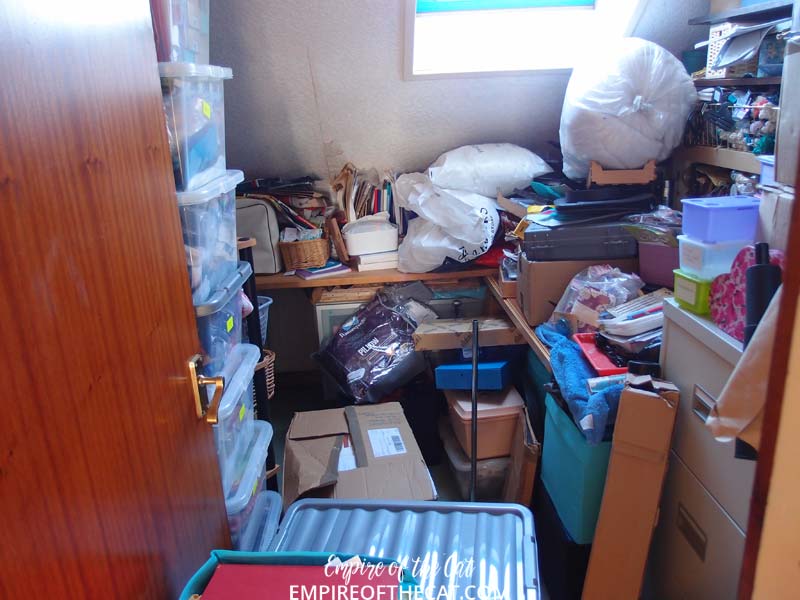 This was the current state of the box room (smallest bedroom) yesterday when I opened the door.  I like to think of it as a walk-in storage cupboard and not a bedroom because it is where I store all the really useful craft supplies stash. And that does not include the really useful art supplies, no no, that is in another room that does look a bit better than this one lol. This room and its contents represents a lifetime of craft making.  There is everything in there that I could possibly ever need to make anything I can think of.  To make matters worse, I used to make and sell handmade items, so in order to do that, you have to have supplies, and then you have to store stock and then you end up with a craft shop inside your house!  I took a break from it a couple of years ago due to family health problems and I enjoyed the stress free break so much that I never reopened the shop.  I might at some point but not now.  I thought about opening it last year during the first lockdown since everything was shut and everyone was ordering online so it probably would have been very lucrative for me to have reopened, but the thing was, I really just wasn’t feeling it at all, and although I could have been helping people get hold of their urgent craft supplies, it just felt a little bit like taking advantage of the situation and making money off a bad situation.  There were so many people selling things online for ridiculous prices I didn’t want to be associated with anything to do with selling online.  I remember there were people selling bags of flour for £10 and toilet rolls for £50.  I wouldn’t have increased my prices but it still felt icky to me.

What I did instead, was go through both rooms, and pull out enough stuff to fill my car twice and donated it to a charity craft group who make handmade items for sale to support the charity. I used to do trade fairs and craft fairs so I also had a lot of display items, shop fittings etc and I donated them too as they could be used in the charity shops for displaying items.  A lot of the stuff I donated was unopened stock for the shop, rolls of fabric, knitting needles, crochet hooks, buttons, threads, packets of needles, all kinds of haberdashery etc.

And yet even with all of that gone, we are still here 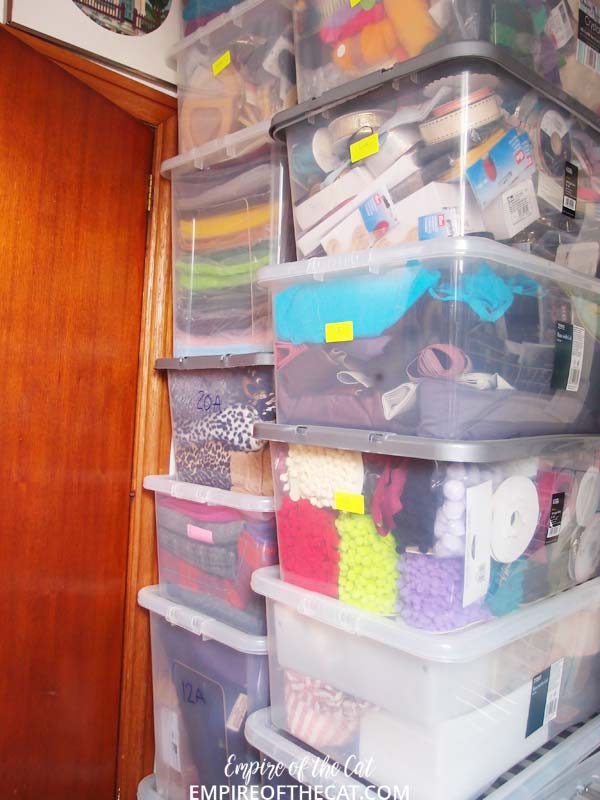 I have a lot of these plastic tubs.  Sometimes I worry about the weight of it all and whether it will all come crashing down through the ceiling one day.  I decided to have a clearout and a bit of rearranging. 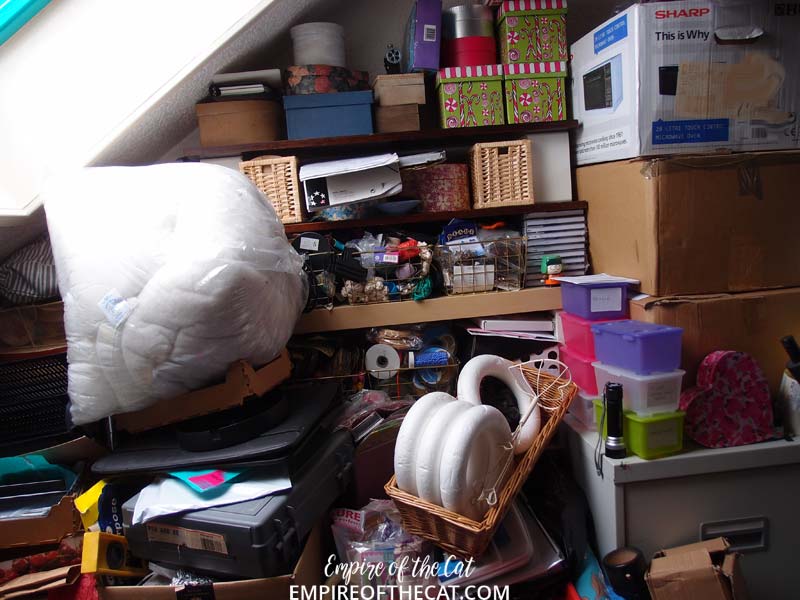 Somewhere under all of that lot ^^ is my jewellers bench and supplies. 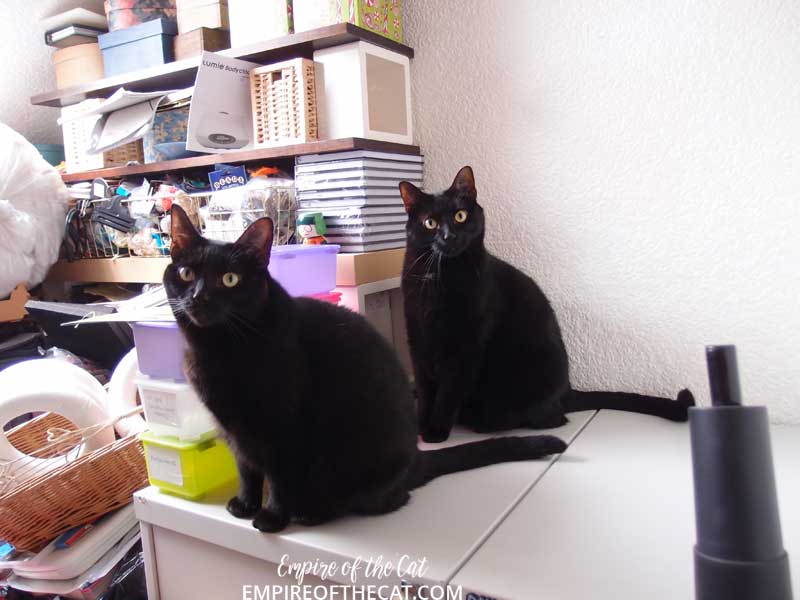 I started by clearing off the top of the filing cabinets.  The kittens were excited to see a flat surface that was not covered in crap.  Gansey’s face says it all lol. 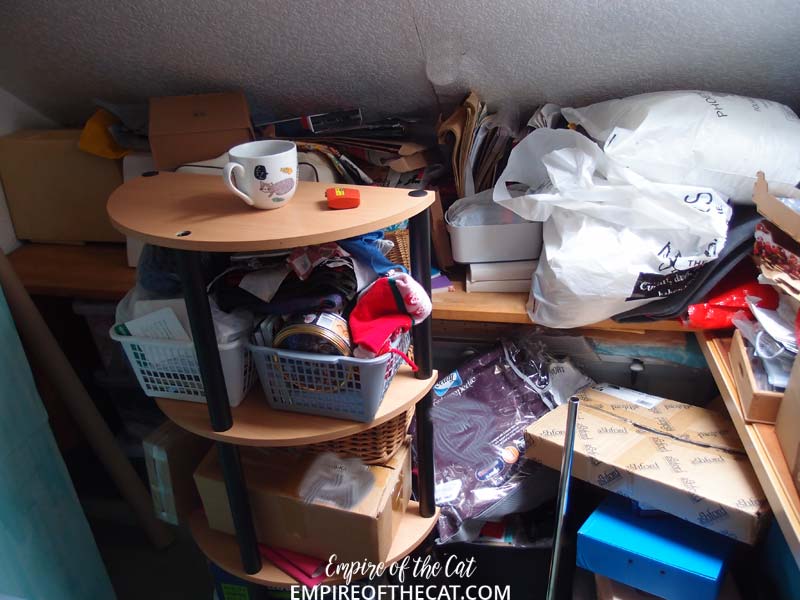 I took a coffee break when I reached the halfway point and spent some time with the tape measure doing some calculations. 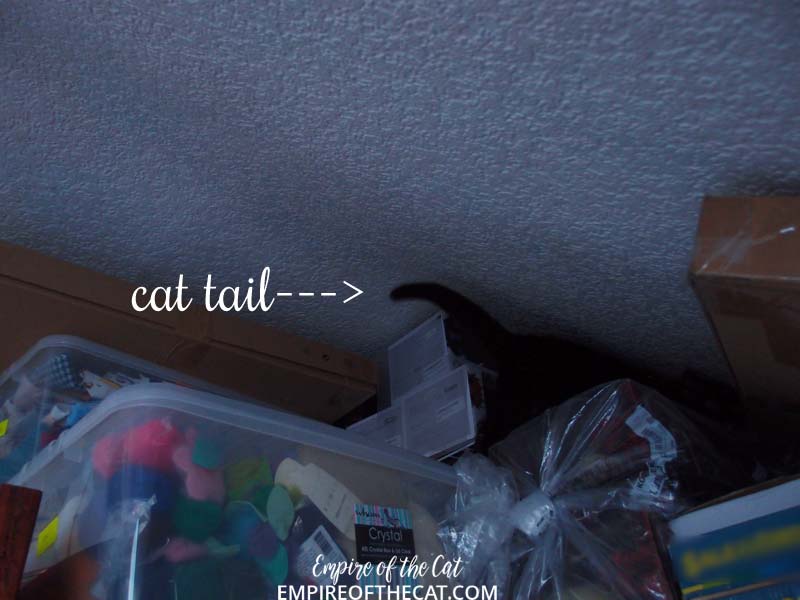 When I reached the other side of the room it was game on for the kittens, once they could see a way to get to the top of all those plastic tubs, they scaled the Mt Everest of craft storage and disappeared behind it all.  Lily has goals to touch the ceiling in every room in the house.  She has two left! 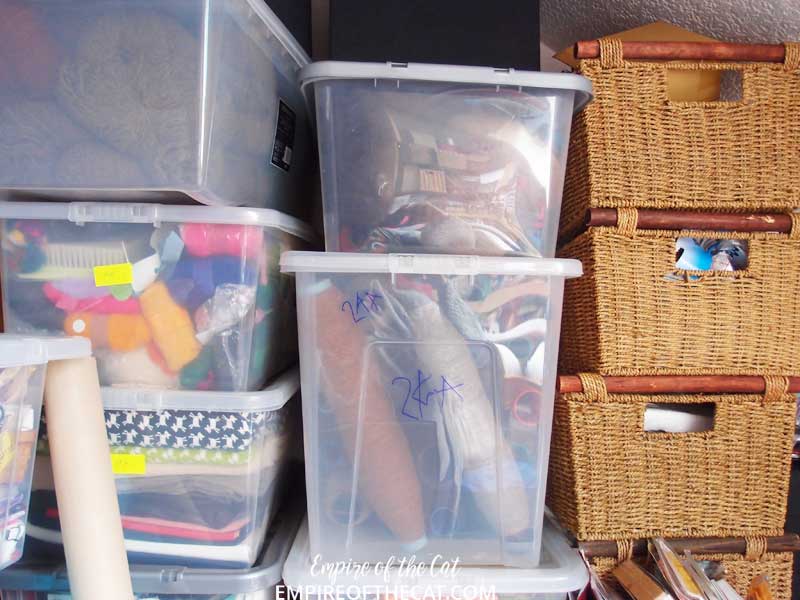 Some hours later, and here is a slightly more accessible section of the room which only has one layer of plastic tubs instead of two, so now I can see everything at least.  One of my reasons for tackling this room now was because I wanted to find something and it was proving difficult (plus some stuff really has to leave the house) so I thought it needed sorting out immediately.  Two of the things I needed to find are in the above photo.  In the tub marked 24A in the centre are some Harris Tweed yarn bobbins that I bought on a trip up to Harris and Lewis a few years ago.  This is yarn they use to weave the Harris Tweed so technically if you used it to weave something then you would have your own Harris Tweed except that you can only call it Harris Tweed if it was woven on islands of Harris and Lewis.  The other thing I was looking for was my Harris Wool (plastic tub on top left) which I also bought at the same time.  This is pure new wool from the same sheep and they dye it the same way as they do with the yarn that makes the tweed. 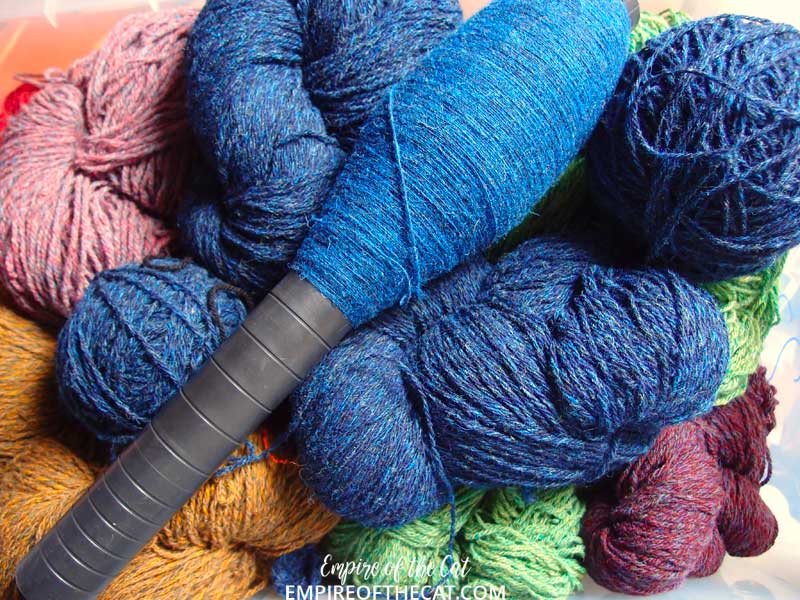 Here’s a look at what was inside that plastic tub and one of the Harris Tweed bobbins that has some of the same colours as the blue yarn.  Harris Tweed is never just made up of one colour, even if it is just a plain blue, there are so many colours that make up that blue. 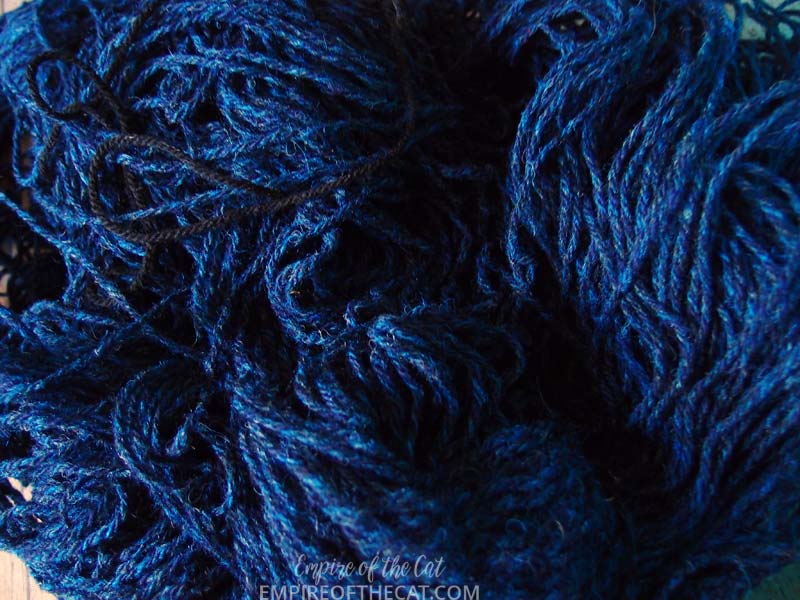 I’m thinking I might make something from this which is why I wanted to pull it out and have another look at it.  Still thinking what that might be but I also wanted to show you something a friend sent to me one Christmas that is one of the best gifts ever. 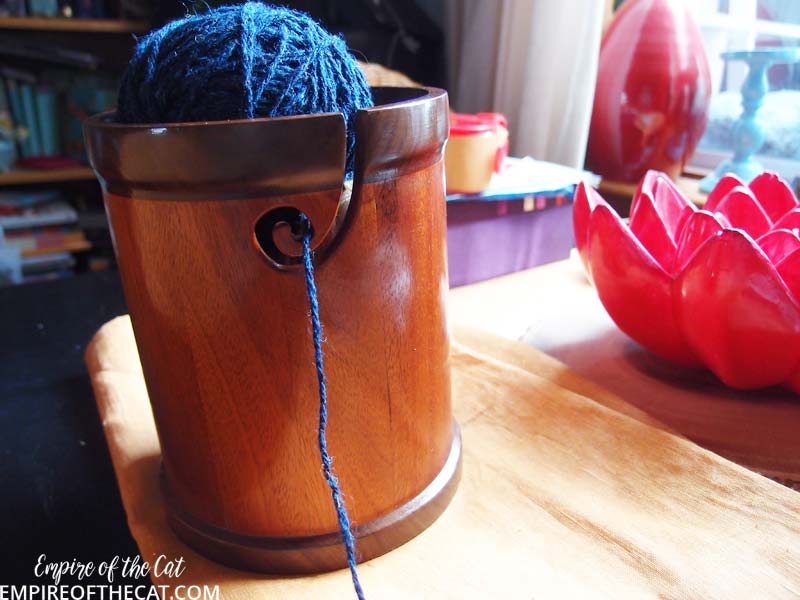 When I opened the box, I thought it was an ice bucket – how would that work?  An ice bucket made of wood is about as much use as a chocolate teapot and then I turned it around and saw the little cat tail and realised what it was!  It was made by a wood turner local to her and it is a very beautiful and useful item.  Previous to this, I used to just use a cardboard box or a paper bag.  This is so much better than that!  So I have been spending time on Ravelry looking at what other people have been making with this yarn and trying to work out what I want to do with it now that I have finished the socks that I was crocheting.

Do you like to make all the things?  Do you have an arty crafty stash?  Let me know in the comments below and as always, thanks for reading!

Links to all the days of the April blog along
April 1st – Day 1 – You don’t have to be perfect to be amazing
April 2nd – Day 2 – Cat hammocks and sneak peeks
April 3rd – Day 3 – Favourite Children’s Books
April 4th – Day 4 – Green Crochet Socks Story
April 5th – Day 5 – A Short Family History of Scones
April 6th – Day 6 – Happy Tartan Day
April 7th – Day 7 The Unbearable Lightness of Old Wallpaper
April 8th – Day 8 Off with their heads my Queen
April 9th – Day 9 – Andy Warhol Cat
April 10th – Day 10 Tiny Book Covers WIP
April 11th – Day 11 Happy National Pet Day
April 12th – Day 12 Collage Fodder, Recycling, Stealing from Kittens
April 13th – Day 13 Company of Liars ATC Book Cover
This month I decided to join in with Effy Wild’s blog along – 30 posts in 30 days and hope I can think if enough things to say. every. day. I’ll do my best to keep up.  The idea is to blog every day but also to comment on other people’s blogs to keep the conversation going.  There is a facebook group where you can link your posts and find other people’s to go visit and comment. During April you can find all the Blog Along posts linked on my home page for convenience. If you leave a comment, I’ll be sure to return the favour!

Oh wow you did well! I need to sort my craft room out, but each time I look at I just feel stressed, and shut the door again!

Author
Empire of the Cat
Reply to  Cheryl Turtlemoon

Thanks, still a work in progress though! I have the same problem and end up shutting the door instead lol

Oh that yarn is so gorgeous! Reading your post made me exhausted for you – organizing is such hard work but dang you got so much done! Most excellent

Author
Empire of the Cat
Reply to  Lisa

Isn’t it though. I haven’t really got that much done, I’m still working on it today lol

Your craft storage reminds me of my corner of chaos, only multiplied by 100. 😀 I’d have a heyday in there, though!

And that yarn is gorgeous. <3

Author
Empire of the Cat
Reply to  Effy

Wow, what a lot of stuff! I think all Crafters are the same though. I have a friend who had her excess in storage! When we left the UK to come here to Australia a year ago, I had to get rid of three quarters of my craft room contents.
Love that blue yarn and would love to see what you decide to make with it.

Author
Empire of the Cat
Reply to  Susan Renshaw

Yes at times I think that is too much stuff for one person to have, but then some of it was for my shop, and not just personal stash, so I didn’t feel so bad about it. When I moved here from Aust, I had to get rid of a lot of stuff but I did manage to bring crafty supplies with me lol. The yarn is lovely isn’t it. Still thinking what to make…