Buy All The Things, From the Studio, My Creative Life

Hey everyone, hope you are enjoying your Monday and that you have a great week to look forward to.   My week, and in fact, my entire month has been so busy that I completely forgot that it was also STAMPtember!  This is in complete contrast to last September when I had it on my calendar with notifications on so I wouldn’t miss out on anything and was ready and waiting to see the first release on September 1st.  For those who don’t know what I’m talking about, Stamptember is a month-long celebration of stamping, run by Simon Says Stamp and includes limited edition stamp releases each day.  It’s a once they’re gone, they’re gone situation, so if you want something you better grab it ASAP.  This year, I totally forgot all about it, until I saw the Tim Holtz release posted on someone’s Facebook page on Saturday.  OMG I said to myself, how could I have forgotten Stamptember!  As I have bought practically nothing this year, I wasn’t really in the frame of mind to be thinking about stamp sets and new releases or limited releases.  I can’t honestly say i care that much and I am over the hype and over-commercialisation of it all… but then I saw it was more Snarky Cats and I do love those little guys. 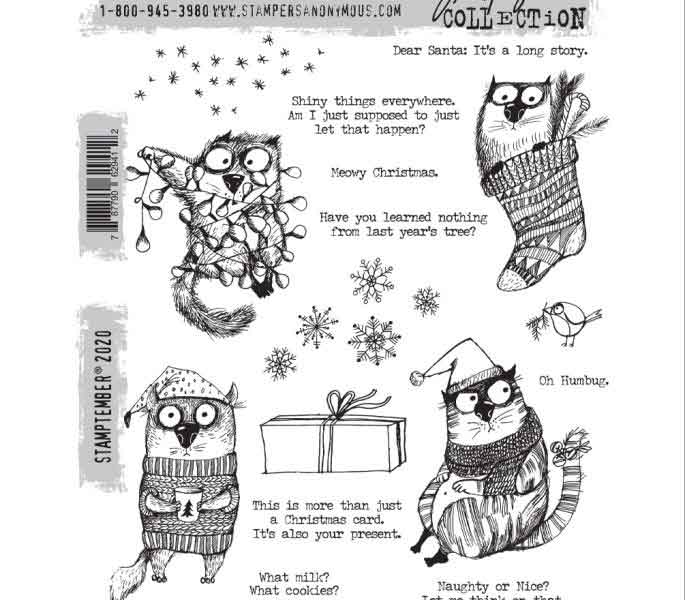 So I sat there for some time trying to reason with myself about whether I needed these stamps in my life (btw they are $29.99).  I already have the original set.  Are they similar?  Couldn’t I just draw a Xmas jumper on one of the ones I already have?  Couldn’t I just draw a blooming cat for that matter? But in the end, I decided I couldn’t resist and I bought myself a set.  I’m writing this today as I just saw that it has sold out and people are complaining about that on FB, so I’m glad I placed my order, all that remains is to wait for it to arrive.  The one with the lights looks so cute, maybe this will be the answer to what Christmas cards I’m going to make this year.

I haven’t been paying attention to any of the releases, because seriously there are just so many of them and I am so over it all, so best not to look at all.  But while I was looking at this set, I saw that there is also a Halloween Snarky Cat set being released next month.  By the time it reaches these shores it will likely be too late to make Halloween cards with them but if you like the look of these cat stamps there is still the original set and this new Halloween set, both of which are regular and not limited editions. 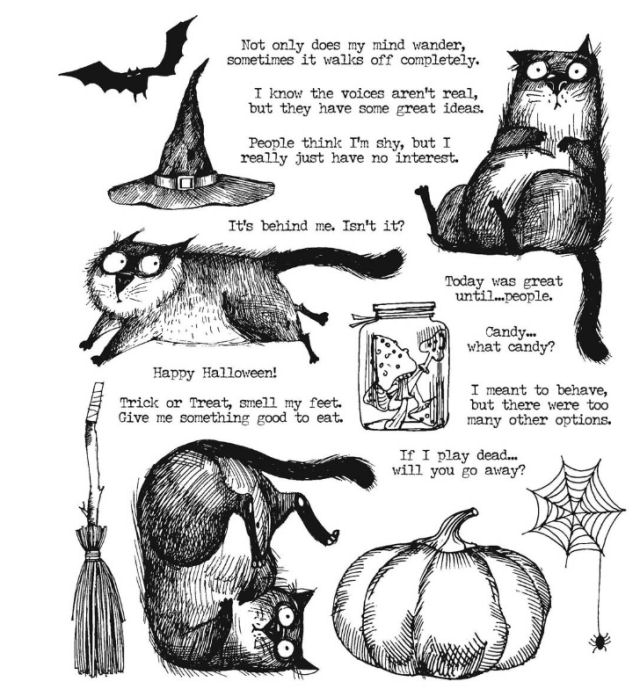 Halloween Snarky Cats set, which I think looks even better than the other two sets!  LOL 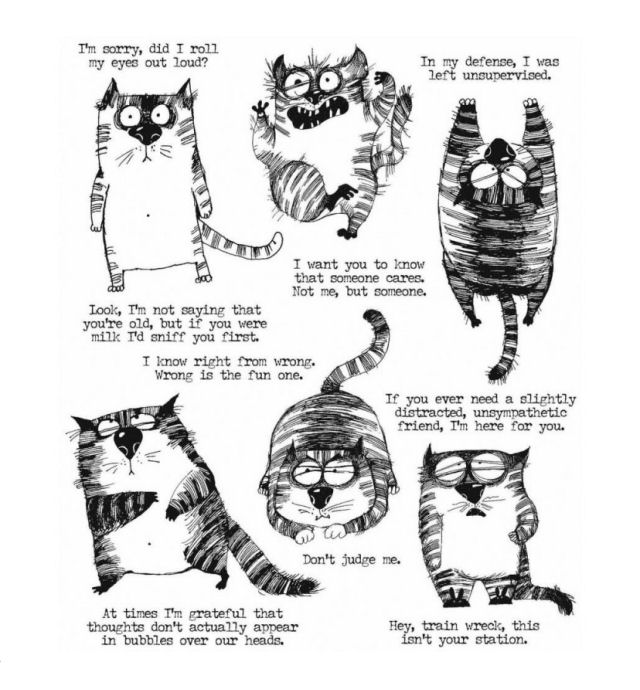 And the original set, I’ve used to two on the left more than the others as I love their expressions.

Anyway, if you have read this far, you might be wondering why I’ve been so busy this month.  I have been trying to get some work done around the house, maintenance mostly before cold and winter sets in, but it feels like it’s already here as I am FREEZING today.  Also I decided to get rid of a lot of unused craft materials from my stash.  *gasp*  Yes, I have already taken a car load of craft donations off to charity, and there was more that I couldn’t fit in the car, so I need to take the rest some time this week.  A lot of it was fabric – a lot of fabric – plus yarn, sewing notions, threads, and other random things that I really don’t need and can’t use.  I used to do a lot of sewing but that’s just not possible anymore due to various issues, so it was just starting to feel like I had a craft museum in my house and it was depressing the hell out of me.  This year has been a crap year for so many people, no one could have predicted the events of this year, and I think like a lot of people, it has made me re-evaluate what is important and what really isn’t.

Buying a whole load of unnecessary stuff is not important to me.
Being tempted by the latest craft products, so not important to me.
Fear of missing out on said products – don’t care.  (OK I succumbed and bought these cat stamps but that is just one thing and not half a dozen like last year)
Having a craft room chockablock with all the latest and greatest materials, not important

I am really getting tired of seeing people pushing product, whether it’s Design Teams, Designers, Brands, Shops, I’m really over it.  I don’t want the products, I don’t want to spend the money, and there’s no room in my house for more stuff.  I understand how business works and I know that in order to stay in business, Brands and shops have to keep selling or they go out of business, but it just feels like overload right now.  What’s worse of course, is that all the old stuff you have already purchased is cast aside in favour of the shiny new thing, which in turn will be cast aside when the next shiny new thing appears.

So yeah, I have been unburdening my house of unused craft stuff.  I haven’t started on the papercrafting stuff yet but I am seriously thinking about getting rid of every stamp, die, stencil, paint, ink etc that I have never used.  A bit like people do with their wardrobe – not used in six months? OUT!  Doesn’t fit you anymore?  OUT!

As always, thanks for reading!